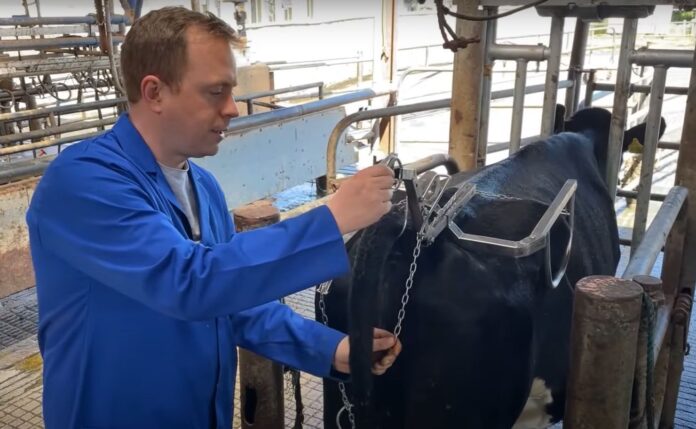 Tail lifting as a cattle restraint method may be a thing of the past, thanks to a new invention from Dr Niall O Leary.

Often when other restraint methods fail, farmers and vets usually lift cows’ tails, which can be highly effective in restraining cattle from kicking.

Whether milking nervous heifers, treating painful teat injuries, performing castrations, or other veterinary procedures, the simple act of tail lifting has proven to be a calm and effective restraint method.

However, tail lifting’s greatest drawback is the need for a second person – making the most effective restraint unavailable to lone milkers.

In larger parlours with two or more milkers, a significant slowing of milking occurs when one milker diverts from cluster attachment to tail lifting.

Growing up on a fourth-generation dairy farm in Abbeydorney, Co. Kerry, Dr Niall O’Leary has experienced these frustrations first-hand, especially when milking or treating mastitis.

He says he was “sometimes on the wrong end of a few painful kicks which have endured in my memory”.

“I discussed the problem with my father, and we began pondering potential novel solutions that would be more effective and found ourselves drawn towards one form of restraint: tail lifting’.

“Pre-calving parlour training and calm handling can help minimise milking stress for both man and beast but is often insufficient as at least some heifers will tend to need restraint for days, weeks, sometimes even months.”

“Kickbars and tying of legs with ropes are typical approaches but are often only partially effective while their application can also pose a risk of injury to milkers.”

Niall’s father had often thought about if only there were a device to keep a cow’s tail raised.

He thought the benefits of such a device for milking staff generally, and particularly lone milkers, would be significant.

Niall, who completed his PhD in farm management and undertook a post-doc on dairy technology at Moorepark, discussed at length with his father the feasibility of such a device.

They explored various design approaches, which eventually led to a prototype device, that proved “consistently effective”: The TailJack.

They extensively trialled prototype TailJacks on the family dairy farm in spring 2022, where 100 heifers calved down.

Milking staff began using the TailJack at the beginning of calving and saw the benefits immediately, so they quickly made three more TailJacks to meet requirements.

“We did not have one heifer that kicked with the TailJack on. Staff quickly learned that once the TailJack was on, it seemed to calm nervous heifers.”

“Clusters could be attached safely, and ‘kicking off’ of attached clusters, perhaps the biggest irritation during milking ceased.”

“This allowed staff to move on to milking the next cow/heifer in confidence the cluster would not be kicked off.”

“It was not uncommon to see all four TailJacks in use at the same time at the peak of heifer calving.”

Following the successful trial, they enlisted technical expertise from Ciarán O Hara of O Hara Contracting in Ballyheighe and MTU Kerry to improve the prototype.

Months of refinements followed, leading to progressively better designs before finally, it all came together as an easy-to-use, safe, and reliable device.

It has won a place in Enterprise Ireland’s prestigious Innovation Arena at the 2022 National Ploughing Championships.

A life-sized cow model will be available so you can see how easy the TailJack is to apply and how the tail is lifted and held in a raised position.

The TailJack works by attaching to a cow’s hips, providing an anchor from which the tail can be lifted and held in a raised position.

Crucially, the TailJack can be applied from the milking parlour floor requiring no climbing, using the following step-by-step process.

He continued: “The TailJack provides an efficient solution in all these parlour situations whether with lone or multiple milkers.”

“It has proved effective in every parlour we have tried, including herringbones and rotaries, but it might not suit every parlour design where access to cows rumps may be restricted.”

“We have not had one cow kick with it on. This is not always the case with other forms of restraint. It is, therefore, unique in how reliable it is,” he added.

The firm is transitioning from prototype to scale production currently, and units are now available to purchase for €379 (including VAT and delivery in Ireland).

However, there is an introductory offer of €250 excluding VAT (€317 including VAT +deliverey in Ireland) until September 30th, 2022.

O’ Leary concluded: “We want to inform as many farmers as possible so they can have a TailJack in time for calving.”

“The Irish market is our current focus. Post-spring 2023 calving season, we would hope to look to develop international markets,” he concluded.