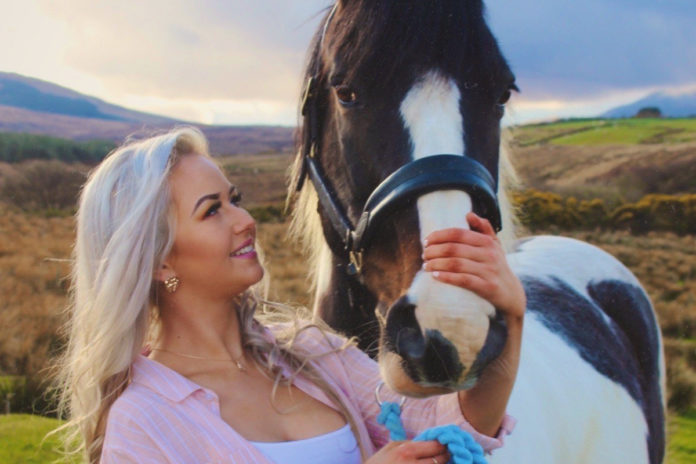 Ailish McBride may only be 20-years-old, but she has already shared the stage with some of Ireland’s biggest household names, including Philomena Begley, Margo and Derek Ryan.

Music, farming and horse-riding have been a part of the Creeslough, Co. Donegal native’s life from a tender age.

“Country music was always played in our house for as long as I can remember.” Ailish, who grew up on a suckler-beef farm, explained to Catherina Cunnane, editor of That’s Farming.

“The likes of Shania Twain, Philomena Begley, Louise Morrissey and many more were played in the car and the radio is always on in the kitchen.”

Ailish was just 15-years-old when she realised she wanted to pursue a career as a professional recording artist. She was a member of Donegal Youth Choir for approximately two years before she gradually broke onto the country music scene with the release of her debut album and first single, a cover version of Home to Donegal.

“I began securing bookings for guest spots at concerts all around Ireland and I gigged in local pubs around my area with my good friend, Ben McFadden, which really helped to boost my confidence as I was just starting out.”

Ailish, who will graduate from Letterkenny Institute of Technology with a degree in veterinary nursing later this year, appeared on Glór Tire in recent years.

“I loved every aspect of the experience such as meeting and getting to know my fellow competitors, judges, musicians and all the crew working hard behind the scenes to make it all come together.”

“Ciaran Rosney was my mentor and that’s where the idea of recording Golden Ring sprung from as we performed it on our concert night.”

“I loved working with Ciaran – he always had good advice to give and was so easy to work with. It was a real learning curve for me also to participate in live TV, something I had not experienced before.” added Ailish, who presented her own country show on Spotlight TV.

She recorded a mix of Irish and American country songs, including Redneck Woman and Scania 164 for her second album, Keeping it Country.

Country Girl, her latest album, has just been released and features her popular duet with Rosney.

She recently released a single direct from the album titled Tonight the Heartaches on Me. “It has been sent to radio DJs all around the country and is now available to request from your favourite stations.”

“All of my albums are available to purchase from my website at www.ailishmcbridemusic.com and available to download on all platforms such as Spotify and iTunes.”

“The most successful song I have recorded to date is Scania 164, which I released, along with the official music video, back in 2016.”

Looking ahead, Ailish plans to keep recording and releasing music, but for now, Covid-19 will continue to wreak havoc with the entertainment calendar.

“Hopefully, we will see some light at the end of the tunnel. I can’t wait to get back on stage, to do what I love most, once it is safe to do so.”

“The global health pandemic has had a harsh impact on all musicians and performers. I had so many gigs I was looking forward to performing at.”

“The uncertainty of when gigs can return, I think, is the most unnerving aspect, as if we had a specific date, it would be something to aim for,” added Ailish, who said that for now, staying safe is the main priority.

“At the start of lockdown, we were busy with cows calving. Keeping busy made lockdown a lot easier for me as without it I don’t know what I would have done!”

“I also purchased home recording equipment to make my own little studio so I have been working on songs and getting used to the workings of that, but I think it’s best for me to leave it to the professionals as it’s not as easy as it seems!”

“Life as a female country music artist can be challenging but is very rewarding at the end of the day.”

“The feeling that you get after a good gig makes all the hard work worthwhile. It is part of my life now and I wouldn’t change it for the world.” Ailish concluded.