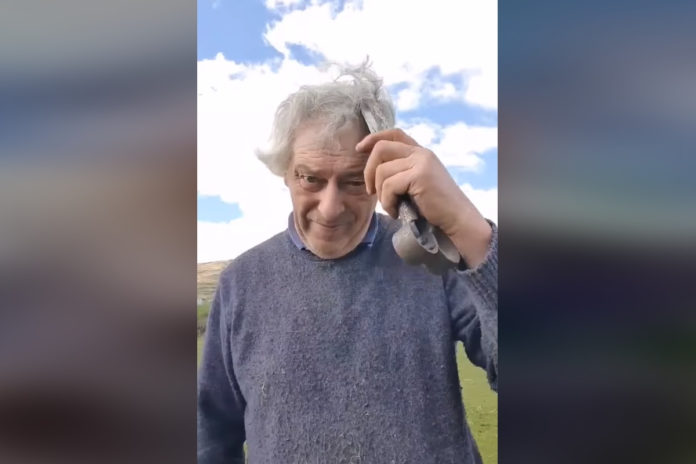 The man behind the video

Having risen to fame from a video he created just a few months ago, Donal Anderson is a well-known face among the farming and wider communities.

The Bohernabreena, Tallaght native was already a notable figure in the sheep and sheepdog worlds, having spent many years providing sheepdog demonstrations and hand-shearing exhibitions across the country.

Anderson started farming at an early age, and once he left school he came home to farm alongside his father and uncles on their upland sheep enterprise.

The Tallaght native currently farms 130 ewes on his upland farm, which consists of 29 acres of enclosed land as well as a large area of commonage.

Lambing starts for Donal each year around the 19th of March and runs into the early half of April. The lambs are kept until October to get the most value out of the hill as possible, before being sold in Blessington Mart.

The ewes are majority Cheviot, but the upland farmer has dabbled in some other breeds in recent years, such as Swaledale and Lleyn, and the results so far have been promising, especially with the Swaledale ram.

“The ewe hoggets and the ewe lambs have been really good from him. The main thing I’m looking for with them is to get that extra bit from the hill,” Donal explained.

Although primarily a sheep farmer, a number of other animals are kept on his South Dublin holding, such as horses, donkeys, geese and his famous sheepdogs.

Before he rose to fame with his video, Anderson was, and still is, well-renowned across the country as one of Ireland’s top sheepdog trainers.

“I’m working dogs since I was going to school. I was only 9 or 10-years-old when I got my first dog and got her working. I became interested in trials then and they used to have trials in Oldbawn, so I would walk down every summer to watch.”

“We have a tractor run in Bohernabreena each year and that’s where I started doing the demonstrations myself. From there I gained confidence because people were so interested that it encourages you to keep doing it.”

From there, Donal took his sheepdog demonstrations to the ‘Flavours of Fingal’ event while also showing off his hand-shearing skills. He gained much popularity from this and was invited to do the same at other events.

He now travels the country each summer going to various agricultural shows to show the general public the skills of both himself and his dogs in herding animals.

The geese are the animal of choice at Anderson’s demonstrations. After trying other species of poultry, he found the geese had the most benefits in terms of both their show potential and their maintenance.

“I used to use hens or ducks at the shows, but the geese are easier for people to see and they’re easier to manage. They’re inclined to stay together. The geese are nearly self-sufficient as well because they graze most of the year and don’t cost a lot to keep. I only have to feed them for the winter,” he explained.

As eluded to before, he also demonstrates the traditional method of shearing sheep, using the old-school blade.

These hand-shearing demonstrations have proved to be equally as popular with the agricultural show attendees. Although Donal never competes in shearing competitions, he was pleasantly surprised on one recent occasion when he decided to take part.

“There was a hand shearing competition at an event called the Hollywood Fair last year, it’s based on the 1950s. So, I entered the hand shearing and I actually won the competition. I never expected to win it, but I must have done a good job.”

Donal probably imagined a quiet spring and summer in 2020 following the onset of the coronavirus and the cancellation of all shows. Little did he know he was about to launch himself into internet stardom following a video he made at the start of April.

After making and publishing a video of himself cutting his long locks using hand shears, he gained national attention with the video going viral across the internet.

It wasn’t the first time he had made this kind of a video, as two years prior to this he made a similar one where he cut his hair before the Ashford Country Fair as a joke, saying he was practising his shearing technique.

That video remained undiscovered outside of his social media connections, so this time he didn’t envision that it would be any different.

“I needed a haircut around Christmas time but there were so many people talking about having the flu and things like that, so I said I wouldn’t get a haircut in case I got a dose of something.”

“I knew that I needed a haircut, but I wasn’t going to the barbers, so I decided to do it with the hand shears. I used the phone as a mirror and when it looked alright, I put it up on Facebook.”

He told That’s Farming that he never imagined it going as far as it has done. The video has over 4.9 million views on his own social media page and has been used on various television advertisements across Ireland and further afield.

The popularity he has gained has taken getting used to. A series of radio and newspaper interviews followed as the video took off, with his personal highlight being his interview with Ray D’Arcy on RTÉ.

“It’s like the fella who won the lotto and said he had friends he never knew before,” Donal joked.

“I had a good auld head of hair anyway. It was getting so big that I could hardly get into the jeep with it.”

Now as normality begins to return to his life, Anderson can regain focus on what he loves doing the most, farming his sheep and working with his dogs.

In 2019, he was inducted into the National Inventory of Intangible Cultural Heritage for his practices of Traditional Sheep Farming and Sheepdog Training, which brought him great pride and was a fantastic way of recognising his work in preserving and promoting upland sheep production.

In his work of protecting and preserving traditions for generations to come on the hills, Anderson is a long-standing board member of Wicklow Uplands Council and Wicklow Mountains National Park Council and currently sits as secretary of the Dublin county executive of the Irish Farmers Association.

Although the number of people farming in upland areas is declining, he still believes that the future is bright and hopes that, through his work and the work of others, the tradition will live on and continue to be a major part of Irish agriculture.

- Advertisement -
Previous article
Britain ‘about to be flooded with cheap, low-quality food’
Next article
Jeep stolen from farmer in his 80s