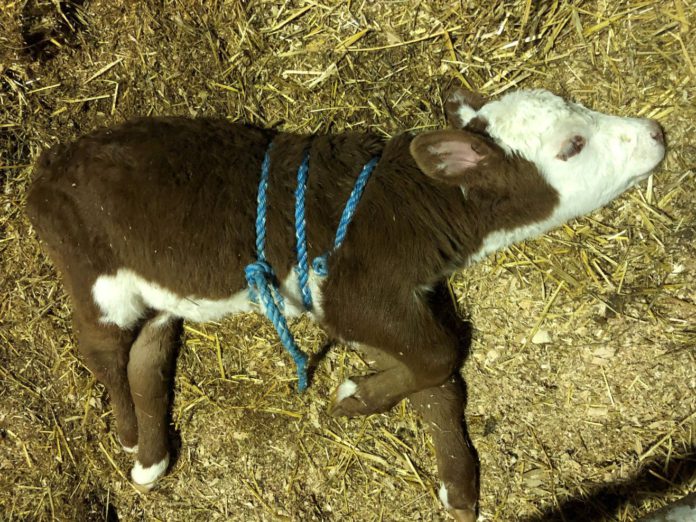 PHOTOS: How the Madigan squeeze ‘saved this calf’s life’

We highlighted this technique last year, after Cavan-based vet, Gerard McGovern, performed the procedure on a non-sucking calf.

He explained that many of these calves are “bright and lively but just won’t suck the cow’s teat”.

“By mimicking the birthing process – by squeezing on the foal/calf’s thorax for approximately 30 minutes with a soft rope – the brain is rebooted and with some luck, the calf/foal will be up sucking after the procedure,” McGovern outlined.

Henry Braun has taken to social media to explained how the procedure delivered a remarkable result on his Canadian-based farm.

A calf was born backwards during the weekend and was “limp like a rag doll” for the first 24 hours.

“I did what I had to do to keep it alive for the first 24 and called the vet. I explained the calf was limp as a rag doll and wouldn’t suck — wouldn’t even try to get up. The vet said it sounded like ‘dummy calf syndrome’.  I had never heard of it.” he explained in a post on social media.

Jarod from AbbyVetClinic introduced the farmer to the Madigan Squeeze, which “literally saved this calf’s life”.

He explained in the social media post that researchers suspect that the pressure applied by the rope (the Madigan Squeeze) triggers biochemical changes in the central nervous system that are critical for transitioning the calf from a sleep-like state in the womb to wakefulness at birth.