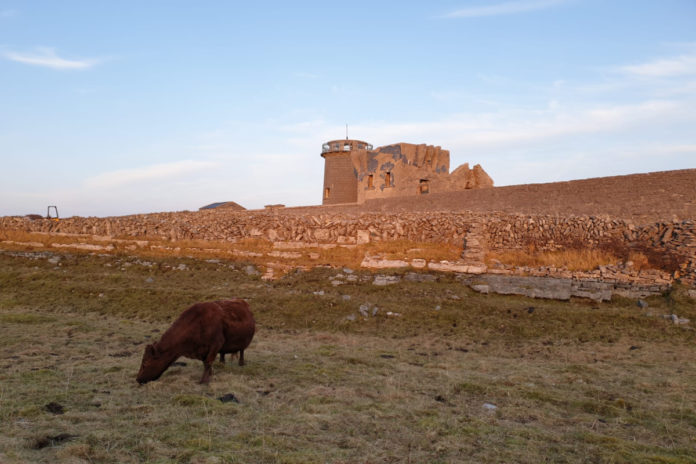 The life of a suckler farmer on Inis Mór

Farming on an island presents its own challenges, but Brian Powell from Inis Mór, one of the Aran Islands off the coast of Galway, says the sense of freedom cannot be contested.

Brian spoke to That’s Farming’s Cian about his suckler farm and life off the mainland.

The Inis Mór native farms nine suckler cows along with their calves, seven weanlings and a bull on over 40-acres of the island. He used to have more but cut back due to time constraints with his job at the island’s airport.

“I took over from my dad about 15 years ago and he used to keep them until a year-and-a-half up to two-years-old. He only ever had sixcows, but he kept a lot of yearlings and weanlings.”

“When I took it over, I got rid of all the cows he had and bought in ten Limousin cows and I decided to sell the calves at 7 or 8-months-old.

“I was getting similar money for a 7-month-old as what my father was getting for a year-and-a-half, so I didn’t see the point in keeping them and feeding them all winter. Any good heifer I’d have, I would keep her and breed off her.”

When it comes to trading cattle, there are two buyers that come from the mainland to buy cattle from the island.

“They come in and they walk around the field and have a look at your stock. You give them a price, they’ll haggle, and you sort it out between you. We have to ship them out then onto the mainland on the cargo boat.”

“We load them at our holding here and drive them to the pier. They go into big containers with about then cattle in each container. There’s plenty of room for them and there are rubber mats underneath them. The boat leaves here at about 8 in the morning and is in the docks in Galway at about half 12.”

Powell says the cost of shipping cattle to the mainland is “quite reasonable” at around €7.50/head and it has become much cheaper. He recalls, about 15/20 years ago, he sent six cattle over for around €160, or £20 each at the time.

“Years ago, they would be on the boat all day, but now after they leave here, they could be on the farm in Galway 6 hours later.”

There is no veterinarian on Inis Mór which means farmers have to be able to manage the health of the livestock themselves, within reason.

“On the other island there is a vet alright, but we do most of the stuff ourselves. The only thing we wouldn’t be able to do is a C-section or something like that. We can do most things but operations would be out of our remit.”

TB testing is done on all of the farms on the island over the course of a week, with vets from the mainland travelling over to complete the test.

“They usually come over in the last week of August or the first week in September. They do half of the island on Monday and the other half Tuesday.”

“They take Wednesday off and see Inis Oírr or Inis Meáin. Then they come back and do the retests on Thursday and Friday,” he added.

There is no silage harvested on the island. Cattle are out all-year-round and the only forage they get is hay which is imported from the mainland. Some people cut hay and save it the traditional way, but Brian said the extent of the machinery would be a mower.

“Our fields aren’t big, only around ¾-of-an-acre and by the time you have the tractor in gear, you’re nearly out over the wall.”

“Some lads might cut it with strimmers or something like that but it’s dying out because it seems to be cheaper and easier to import it. It costs about €35/bale delivered to the docks.”

Life on the island

Brian has always lived on the island, the thought of living on the mainland has never crossed his mind. The freedom that he has and the sense of community on the island feels like home to him.

“It’s peaceful and the people around here are great. Since this virus, we have all pulled together. If I was ever stuck for help, I’d call a neighbour and they would nearly be there before you. There’s always someone to give you a hand.”

“I would go over to the mainland at the weekend but that’s long enough for me, it’s too busy. I like the peace and quiet here, I never liked the ‘big smoke’ as we call it. I have brothers and sisters living on the mainland and they find it hard to come back here.”

“The only way I can describe it is freedom, you can do what you want. My family think the mainland is freedom, they can go anywhere they want whereas the island is only 12 miles by 3 miles.”

“The island is freedom to me – There’s something about it, the island life is unique.” he concluded.