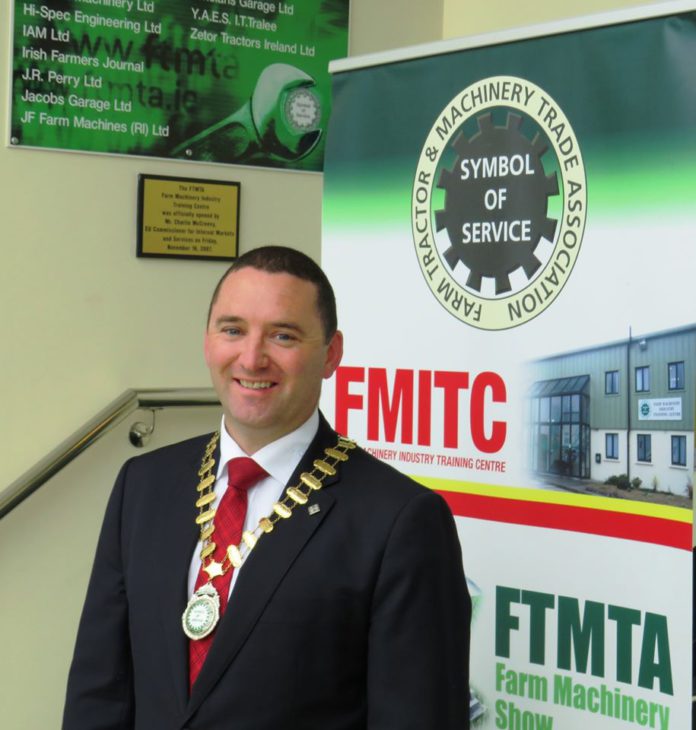 Diarmuid Claridge was elected at the FTMTA’s executive council at their recent July meeting.

He has served as a member of its council since early 2016 and has been vice-president of the association since January 2019.

Having grown up on a dairy and beef farm in south Kilkenny, Diarmuid had a passion for machinery from an early age.

His career in the industry began as an agricultural mechanic, training with, well-known dealer and FTMTA member, Murphy’s Motors Ltd. in Glenmore.

Diarmuid always knew that he wanted to further his career in the machinery industry and after spending a couple of years working in Australia, returned to Ireland to take up positions with major businesses in the sector such as AGCO and Lemken.

This saw Diarmuid develop his skills and experience within the industry and in recent years, he was appointed as managing director of PÖTTINGER Ireland, a subsidiary of leading Austrian manufacturer PÖTTINGER Landtechnik GmbH.

Looking back on the evolution of his career to this point, Diarmuid feels that “the farm machinery industry is an exciting and challenging environment to work within and I would highly recommend it to any school leaver with a passion for machinery”.

The new FTMTA president state that the farm machinery industry is facing a difficult and challenging time but it is important that “we focus on the horizon ahead, remain positive and, most importantly, adapt to change”.

“The FTMTA will play a vital role in ensuring that the industry continues to face those challenges and supporting its members throughout Ireland.”

“I look forward to working closely with the team at the FTMTA and my colleagues on the executive council as we look to the future of a progressive and vibrant trade,” Clardige concluded.