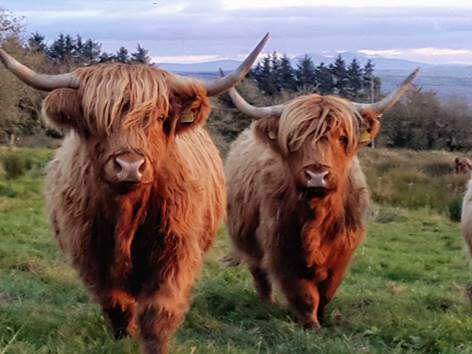 My name is DJ McAuliffe, a farmer living outside Castleisland in Co. Kerry where I have been farming for most of my life. From the early 1990s, I have been working full-time with some type of farm animal.

My family used to own a small butcher shop in Castleisland where I helped out part-time – It had an abattoir where we butchered our own lambs that we purchased and fattened and our own cattle and pigs.

The family was very involved in the pig industry and had three pig units in Kerry and one in Cork. When I finished ag college in late 1992, I rented a farm from a neighbour and purchased bullocks from the local mart and fattened them as well as helping out on the home farm.

As my late father, Jack, died before I finished ag college, most of my training around cattle came from a man called Liam, a great farm manager, we had at the time.

I took over the home farm in 1998 when I was around 25 years-old which consisted of a dairy farm and a 200-sow integrated piggery.

For the next nine years, I worked at dairying and pig production with the help of 3 staff men until around 1997. Due to high feed prices and poor market returns, it was no longer viable to keep the pig business going.

At the time there were new EU regulations coming in to force around loose sow housing which would require a substantial investment to upgrade the older buildings which coincided with the banks getting stricter on loaning out money.

A lot of smaller pig units closed around that time and a good few more have gone since. The pig units surviving to this day, in my opinion, must be really big, or more importantly, really efficient at what they do.

I remember at the time one of the most difficult things I had to face was letting go good staff, men who I would consider friends that I worked alongside for a good number of years.

However, I continued to work the dairy farm alone for around another 8 years. When the economic recession was in full swing, I found myself questioning my options several times.

The increasing volatility in dairy markets reminded me a lot of the pig business, when you could make good money one year only to lose it the next as well as years like 2009 or 2012 with bad milk prices. There were also years like 2013 when bad weather caused a fodder crisis and bales of silage of hay were being imported into the country.

Finally around 2015, I found myself thinking about what I wanted to do long term for the future and considering that I was not making a profit and my farm had been designated an SPA, the lack of ability to expand, land-type cross compliance inspections and various other issues, I decided to get out of dairying in 2016.

I had somewhat of a plan in my head I switched from intensive to extensive, low-maintenance farming with low maintenance cattle. I purchased some Scottish Highland and Belted Galloway cows for their ability to survive on poor-quality forage.

During the summer, they go onto the mountain-type summer grazing and graze purple moor grass and heather and I use the lowland for contract rearing dairy cows for another farmer.

The system works quite well for me and in late September, the farmer takes his cows away. I bring my own off the hill and they stay outside most of the winter.

If I can keep numbers low, they should cost very little to keep and only require supplementary feeding with hay or silage. We also keep a few Kerry bog ponies just for their heritage value and their ability to thrive on boggy ground.

I also worked the next number of years on a pig unit owned by my brother and ran my own set-up part-time which allowed me to pay down debts from the farm and land I purchased some years back.

With some new-found confidence late last summer, I left the pig farm and started looking at other ways to generate income. I had a long-time interest in the internet and how things worked behind the scenes, so I taught myself some basic coding HTML and CSS and then took up an online course in affiliate marketing where I learned about building websites and blogging.

After a few false starts trying to start websites on things I knew little, about last November I finally decided to start one about myself and talk about issues around farming and issues in rural Ireland.

The name I picked for the blog came from the townland I live in called Fahaduff which roughly translated from old Irish means ‘black field’ so the site was called www.blackfieldfarm.com

The aim of the site is partly to air concerns from a farmer’s point of view, to raise awareness as I have seen many changes to farming over the years, some good and bad, but in more recent years, everybody seems to have an opinion on how farms should be run and more often, without ever having worked on a farm themselves.

Another point of the site would be to review some farming products and have some-how to articles where we can share knowledge and if someone finds a product of interest and purchases something through one of my links, I could earn a commission.

The main purpose of the blog, however, is to help fellow farmers and raise awareness as well as showing my own animals and what I do.

I recently started evening classes on digital marketing at the Kerry College in Tralee and plan to continue on studying and working or practicing on my website/blog for the foreseeable future.

I was thrilled when Catherina Cunnane, editor of That’s Farming, contacted me to write a weekly article, which reaffirms my belief that if something is not working for you, that you can always change or adapt and work on something new. You never know what doors might open for you.