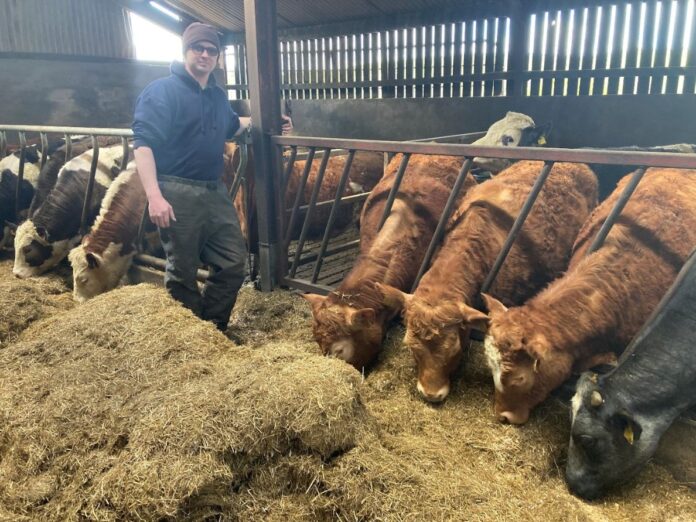 Suckling: 24-month-old calving and no passengers on Tyrone farm

Efficiency, output, and costs are the main focus in the suckling game for Michael McCann.

The full-time suckler farmer runs an enterprise in Altamuskin, which lies between Sixmilecross and Ballygawley, Co Tyrone.

The spring-calving suckler herd sells subsequent progeny as weanlings except those he earmarks to retain as replacements.

He breeds all cows to Charolais and Simmental stock bulls. He purchases bulls based on estimated breeding value (EBV), focusing on traits that will improve herd performance.

Furthermore, replacement heifers are a mix of Limousin and Shorthorn breeding.

All heifers are AI’d naturally between March 15th and April 15th. Heifers that have not cycled by the latter date will be synchronised using fixed-time AI.

Cow fertility is also an important focus on this suckler enterprise. Michael acknowledges he needs to improve the herd’s calving index, as it is averaging 382 days over the last three years.

He has implemented a strict culling procedure, removing older and underperforming cows.

Only heifers that achieve the minimum 60% of the mature cow weight will be served at 15 months. He removes all other heifers from the herd.

The heifers calve down at 85% of the mature cow weight. For example, for the 650kg cow, aiming to calve down at around 550kg at 24 months.

Michael focuses on giving his first calving heifers preferential feeding from first calving down to service again, running these heifers as a separate batch from the main herd.

He is an active member of CAFRE’S Suckler Cow Business Development Group (BDG) with a keen interest in developing his farm business.

Most of the grazing platform is on steep ground with soils mainly comprising either peat or clay.

Over the last number of years, there has been a programme of drainage, reseeding and fencing on his most productive land.

Soils have been analysed and deficiencies corrected. Michael achieves good production from his swards through:

To date, he has been operating a 5 to 7-day rotational grazing system. This has been working well in practice, but he now intends to take a step further by reducing the size of the paddocks to improve grass quality and quantity.

He has acquired a plate meter and is in the process of signing up to grass budgeting software.

Michael undertakes CAFRE benchmarking annually, which allows him to compare his farm performance year on year whilst also comparing his results against other farmers.

The benchmarking figures also allow the suckler producer to determine areas of the business that are working well or areas where he needs to make improvements.

Michael is very positive about his BDG membership and said that he joined to improve himself and learn from other farmers’ experiences within the group.

- Advertisement -
Previous article
Cull cows and bullocks to €2,300 in ‘very lively’ trade at Carnew
Next article
Processor to pay over 50c/L for March milk