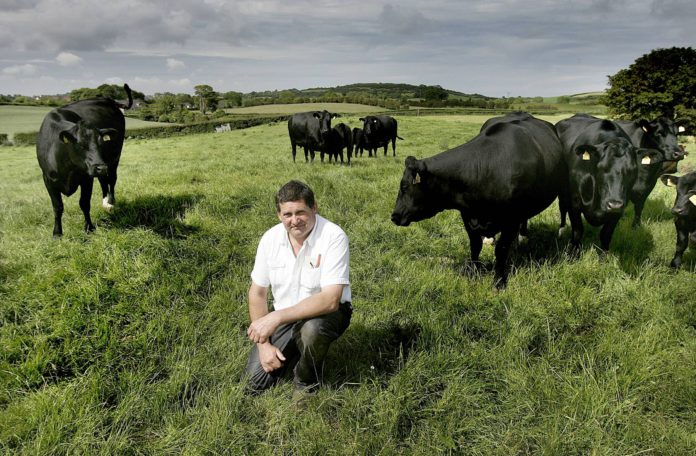 In 2005, Paul Turley, who farms in Downpatrick, Co. Down, had an important decision to make – whether to continue with his small-scale store-to-beef operation or to drive on and develop a farming system that increased the holding’s bottom line.

Deciding to run with the latter, Paul – continuing to work part-time – turned to running a suckler-to-beef enterprise, slaughtering all progeny with the exception of replacement heifers, which were sold at 12-14 months-of-age.

For this to work, Paul needed a fertile cow that would: look after herself; have a good temperament; calve unassisted; have a good milk yield; and produce progeny suited to a simple grass-based system.

After studying various breeding strategies, the decision was made to go for an Aberdeen Angus cow bred from a British Friesian herd.

These heifers and cows were then crossed back to pedigree Aberdeen Angus sires.

“We were prepared to sacrifice half a grade in confirmation at slaughter to have the extra milk,” Paul explained.

In the time from 2005 to 2011, when the farm hosted the Irish Grassland Association (IGA) beef tour in July, Paul built the herd up to 115 spring-calving cows and grew the size of the farm to 80ha – focusing on maximising the gain from grass and minimising labour.

With this in mind, the breeding programme was simple. The calving date was designed to follow the grass growth curve on the farm.

The Co. Down native only calved cows for nine weeks and had no problem selling any in-calf cows that were due to calve outside this window.

This tight-calving spread led to increased levels of output and reduced labour on the farm.

After the grazing season, calves were weaned in the month of December and – at an average age of 9.5 months – steers would weigh 360kg, while their female counterparts would weigh 330kg.

This represented impressive weaning weights from a milk and grass-based diet only.

Once weaning was complete, both cows and weanlings were out-wintered, with weanlings carried on kale over this period; cows were also fed on kale and had access to wood-chip pads.

As mentioned, replacement heifers were typically sold off the farm for breeding at 12 months-of-age weighing approximately 380kg.

Heifers not suitable for breeding were brought to beef and slaughtered off grass at an average age of 17.5 months – typically from July onwards.

This was – and still is – a low-cost system of farming, with the cheapest resource available – grass – playing a pivotal role and excluding the need for expensive concentrates.

The fact that all animals are out-wintered – and with only minimal machinery kept on the holding – fixed costs are also kept to a minimum.

“The quad bike is the most important piece of equipment on the farm. We have one good tractor with some grassland management equipment such as a fertiliser spinner; that’s all we need,” he said, adding that everything else is contracted out, shared or hired in.

In the intervening period from 2011 until now, Paul has upped the ante and the farm has undergone some noticeable changes.

Fuelled by the return of his son, Frank, to the farm both men are now home full-time.

This has paved the way for a more intensive system, but never strays away from the grass-based production model.

Where there was scope for grassland management and grazing facilities to be improved, measures have now been put in place, with a full rotational-grazing system employed, accommodating paddocks, fencing and water troughs.

Also, regular grass measuring takes place on a weekly basis and every four-to-five days during critical periods; this leads to better utilisation (of grass) and better management decisions on the farm.

The cow-type on the farm is largely the same – an Aberdeen Angus from a British Friesian herd. However, Paul notes that the sourcing of the ‘right’ cow has become increasingly difficult.

As a result, Paul and Frank use some of their home-bred heifers as replacements leading to a three-quarter Angus; one quarter British Friesian-type cow, in some instances.

However, while the cow-type remained largely unchanged, new genetics were introduced to a proportion of the herd in 2016 – Wagyu, with the first calves hitting the ground in 2017.

“The decision was market-led and we always chase a premium. We started looking at other options and I thought Wagyu could work well here with the suckler image.”

“It’s worked well to date, but it has been a very steep learning curve,” he added.

Paul has now secured a contract with a retailer and beef processor for a year-round supply of Wagyu beef, so an autumn-calving system is also operated on the farm now, with the first of these calving in 2020.

While a proportion of Angus cattle are still finished on the farm, the plan going forward is to move to a 100% Wagyu system.

The first Wagyu steers slaughtered off the farm hit a 360-370kg carcass weight at 26 months, while heifers had an average carcass weight of 320kg at 27 months.

The farm now spans across some 162ha and 180 cows were inseminated this spring through a fixed-time AI programme.

“The Wagyu system is a work-in-progress, but it is showing promise, or we would have backed out of it already,” he concluded.

- Advertisement -
Previous article
Landowner prosecuted for destroying over 300 metres of vegetation during nesting season
Next article
Pigs receive over 100,000 pints of unused beer