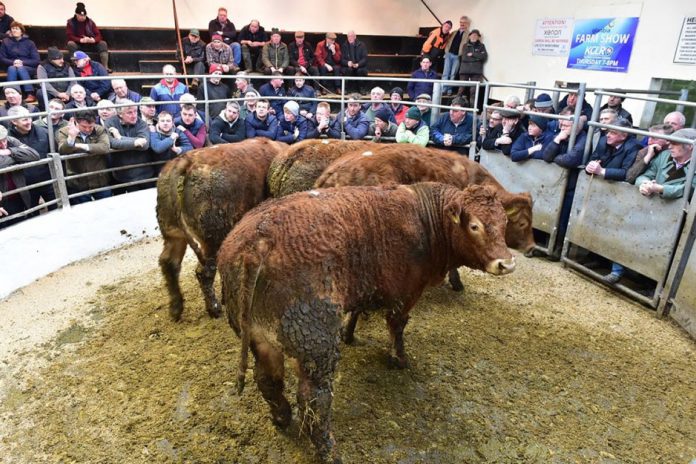 Store cattle continue to set the bar at Tullow

Friday, March 13th, saw just over 700 lots pass through the ring at Tullow Mart, according to Eric Driver.

The mart manager reported that trade remained optimistic for all classes as store cattle continued to “set the bar”.

Driver said that ringside attendance was limited to no more than 90 people, as part of Covid-19 health and safety procedures.

“We took a proactive approach with both hand sanitisation and sanitisers made available for customer-use and also implementations and adaption of the mart office with the erection of a protective screen for customers and staff.”

“We are in changing times and we remind everyone to be careful and to adhere to the guidelines as given by the HSE.”

Management thanked those who did not have to conduct business at the mart, but attends for social reasons, for the efforts. “Their non-attendance left it manageable for people who wished to carry out business ringside, in turn, keeping everyone safe on the premises.” Driver added.

Friesian-type beef and forward bullocks sold from €1.70/kg, while up to €2.10/kg was recorded for heavier-types.

Lighter stores went under the hammer from €1.80/kg, with up to €2.05/kg forked out for Hereford and Angus entries. Driver noted that the key factors which influenced the price of these entries were quality and age.

Continental entries made from €2.00/kg with close to €3.00/kg reported for lots at the upper end of the market.

Beef-type Hereford and Angus entries pushed from €1.95/kg, while quality continental entries north of 500kgs topped out at €1,400.

Driver pointed out that lighter Hereford and Angus stores met with a brisk trade, as prices ranged €1.85-€2.05/kg – depending on age and quality.

Meanwhile, continental-types fetched from €2.00/kg, with close to €2.80/kg recorded for exceptional lots.

Continental stores clicked from €200 with the weight up to a tops of €700 over for heavier-type entries.

Export-type Friesian calves improved by €5-€10/head, according to Driver.

Lighter Friesian lots moved from €15 up to €40, while stronger-types went under the hammer from €40-€85; some strong Frieisan bulls broke the €100 barrier.