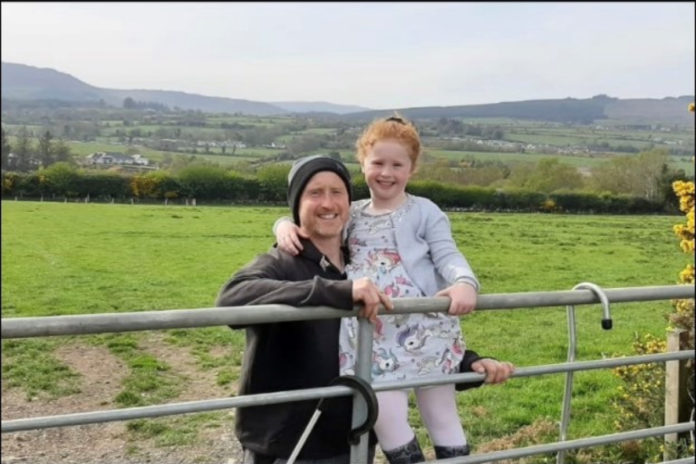 Michael Healy, from Roundwood, Co. Wicklow, runs an upland sheep farm with 380 ewes and 90 hoggets on 100 acres of his own ground, coupled with rented land and commonage.

He currently employs a split lambing system, where he lambs 80 ewes before Christmas and the rest in April.

He farms a flock of Dorset ewes, which have the capability to lamb down three times over a two-year period, making them perfect for early market lamb production.

“They’re kind of a new venture – I used to do more early lambing years ago, but I found the sponging was quite expensive,” he explained to That’s Farming.

“So, I did some research on the Dorset and I thought they were the answers to my problems. Mine are only ¾-bred Dorset but they’ll still lamb well before Christmas.”

The rest of Michael’s ewes are Cheviot, but this was not always the case. He works for Dublin City Council and needed sheep that would facilitate him being away for long periods of the day.

“With working and lambing outside, I found the Cheviot was simpler and a more straight forward lamb to have.”

“We used to breed and show Suffolk-cross lambs. I found that we didn’t get enough for them in terms of what we were putting into them.”

“My idea is that I’m trying to get the lambs to factory weights while keeping it low cost.”

He now has established a flock of top-quality Cheviot ewes, having won first prize in the Tullow Show for the past two-years-in-a-row.

The breeding season on this farm lasts 30 days, in order to have a tighter lambing period and limit the amount of time he has to take off work.

“I usually take 3 weeks off for lambing. I have been lambing the Dorsets inside, but this year I actually lambed the singles outside.”

“I have yet to take a day off with them because they’re easily lambed and I don’t have a big number of them.”

Although he has selected breeds to facilitate his working off-farm, there still is a chance of something going wrong.

“I’m very lucky because my father and mother are still at home and my wife and daughter are around too. So, if there ever is anything wrong, I have a good family network there to help.”

Healy said that finishing lambs off grass on an upland system is very difficult, as this can impact kill-outs.

“Hopefully, you’ll get a good enough price to cover yourself for the year but, for the work you put into the sheep in April, you don’t get enough back out of it.”

“Something I do differently, that other people may find strange, is that I round up my ewes after weaning in July and feed them silage. It means that your hoggets will have more to graze through the winter.”

“I pick a field in the rented ground each year, graze it down, and then feed the ewes silage on it. I’ve been doing that for 3 years and this year I only had 15 dry ewes out of 295.”

Spring lambs are sold to the factory from September through to December. Being part of a producer group is an added help when finishing his lambs.

“Being in a producer group means gives you that opportunity to get the first shout. I’m in with the Rathdrum producer group. My father’s in it since it started, and I’ve continued that tradition.”

Social media also plays a role in the farming system, as it allows Michael to both promote his sheep and learn from other producers. He says a lot of his decisions over the last number of years have been influenced by his online network.

“I have a Facebook page, the Roundwood Cheviot, where I promote the sheep and show what I’m doing. I don’t try to make out that my sheep are better than anyone else’s but it’s to show what I’m doing and learning what other people are doing, which is actually more important sometimes.”

When thinking about the future of farming in his area, the 40-year-old cited both an ageing farmer population and a lack of support for women in farming as key concerns for him.

“Long-term, there are going to be problems because it’s an industry that doesn’t really encourage women.”

“I have a 5-year-old girl. Whether she farms or not, I don’t know, but my hope would be that, if she farms, she’ll be treated equal and given a fair crack of the whip. Anyone that wants to farm and is willing to work should be encouraged.”

“I’m probably one of the youngest farmers in my area and I’m 40 years of age. There are a few lads that are 18 or 19 that are coming through now but they’re in the minority, particularly for mountain sheep.

“Lowland sheep and machinery is far more appealing to young lads,” he concluded.