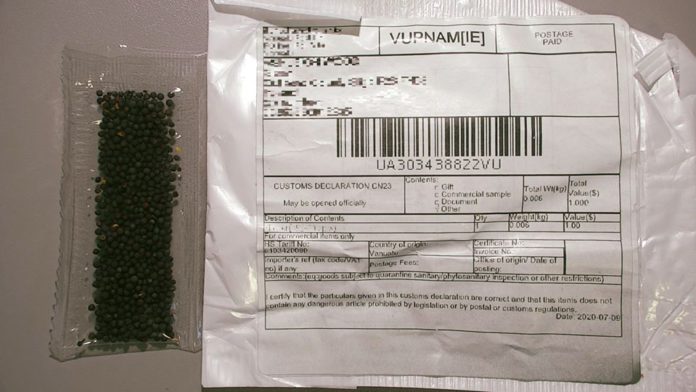 The Department of Agriculture, Food and the Marine (DAFM) has confirmed that it has received 32 reports of unsolicited seed packets from members of the public.

So far, these seeds have originated from China and Vanuatu in the South Pacific, and have contained rape seed, petunia, kiwi and bamboo, according to a statement from the authority.

“These unregulated seeds could prove to be invasive and contain diseases, which could affect our agricultural industry and our biodiversity.” added the spokesperson who confirmed that all these seeds will be destroyed.

Earlier this month, the department revealed that it has received reports from members of the public who have received unsolicited seeds in the post from an unknown sender from outside of the EU, as reported by us here.

‘Do not plant or compost’

In a statement, a spokesperson for the DAFM said this is similar to events reported in numerous other countries around the world, and some of these packages have been labelled as jewellery.

“As the seed origin/type is currently unknown, we are asking the public not to plant the seeds to prevent potential introduction of pests or invasive plant species into Ireland.”

“Anyone importing seeds, plants or plant products from outside of the EU must be registered with us and consignments require a phytosanitary certificate to prevent the introduction of harmful pests and invasive species into Ireland and the EU.”

“Do not plant or compost the seeds as they may pose a risk to the environment.” the department spokesperson stated.

The department advises members of the public to always source any plants and seeds responsibly from known suppliers.

What to do if you receive these seeds by post

The Department has provided the following advice for members of the public if they receive an unsolicited packet of seeds in the post:

Image source: Department of Agriculture, Food and the Marine / Facebook