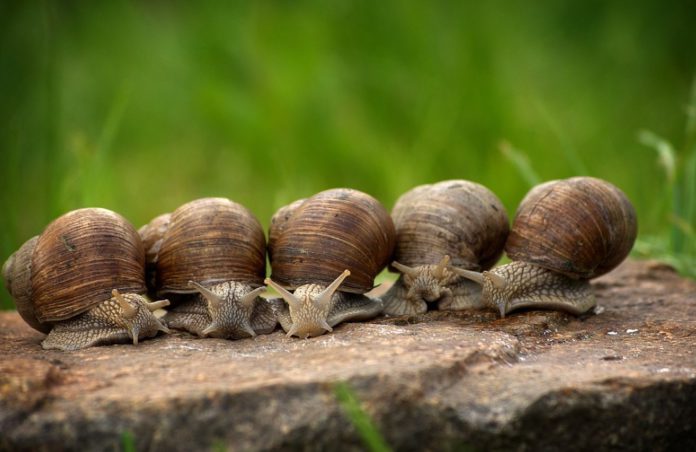 Snail farming is a niche farming concept which has evolved here in recent years. They are currently over 35 farms that are farming snails in Ireland and are located throughout the country.

Sales of 10 tonnes of snails can be achieved on one acre of ground yield a potential revenue of €40,000. The system of production, that is typically pioneered on the internet or literature, is heavily influenced by practices in central Europe.

These involve the use of breeding rooms where populations of breeding snails mate on breeding tables in warm chambers.

The snail, being a hermaphrodite (has male and female reproductive organs), means that each snail can produce 100/150 eggs.

Two weeks after mating, the breeding snail will bury the eggs in containers containing soil that is subsequently moved to polytunnels.

Two weeks later, the young snails will emerge from the soil and will remain in the polytunnels for two months before being move to the outside.

On a recent visit to Stephen’s farm, he discussed how he no longer uses the breeding room or polytunnel but now carries out the lifecycle of the snail entirely outside in the snail unit.

He believes that the indoor production system practised in central Europe is mainly attributable to the more severe winter’s common in these countries as well as the availability of cheap labour.

The main advantages of the outdoor system are the reduced labour requirement, lower energy bills and improved working conditions.

“The breeding rooms required 4/6 hours each day of my time for 4 months as the room had to be cleaned daily. I certainly don’t miss the smell that greeted me when opening the doors of the room each morning,” said Gerard.

The Irish climate is ideal for snail farming where they thrive in damp, wet weather and will cleverly retreat into their shell during extreme heat or cold.

The wooden structures allow dry food to be placed on top when they come out to feed at night. The meal is derived entirely from plant and vegetable protein.

A 5mm pellet form of the ration is currently being trialled that is specifically formulated for the wetter climate in Ireland.

The triangle structure allows for a better environment for the snails to grow. It also eases the harvesting of snails as they are easily picked when lifting the individual boards.

Netting covers the entire area and galvanised sheets primed with an electric fence on the border prevents them from escaping.

The breeding season on Stephen’s farm occurs during June-September. The last batch of snails is restricted to an area of the outdoor unit in order to encourage breeding.

In between these wooden structures, a green crop is sown to provide shelter from the elements. Previous years Stephen sowed mustard before now using Fontan rapeseed.

“Mustard suffered from not being able to survive the winter and is also a source of human allergies in a minority of cases,” added Stephen.

He is conducting trials using grass seed to grow under the boards as other crops have failed due to the shading and lack of moisture.

“I intend to try clover as well as it has the added benefit of being a food source for the snails” added Stephen.

Harvesting of the snails occurs three times a year in February, late March, and May. This is when the snails reach 7/8 months in age.

Stephen can plan harvesting at times separate to when lambing or calving is in full swing. The snails are purged, netted and exported to the continent for processing.

One of the biggest obstacles facing snail farming in Ireland is the lack of a dedicated processing facility.

Stephen has ambitious plans to construct such a facility. This would eliminate the significant burden of distribution costs incurred. It would also offer the potential to further develop this niche farming in Ireland.

Courses are being run by Stephen for any person interested in learning more about this alternative farming enterprise.