That's FarmingThat\'s Farming Irelands Largest Farming News, Properties and Classifieds Network
HomeEditor's Picks‘No one is in sheep farming for the money, so you have... 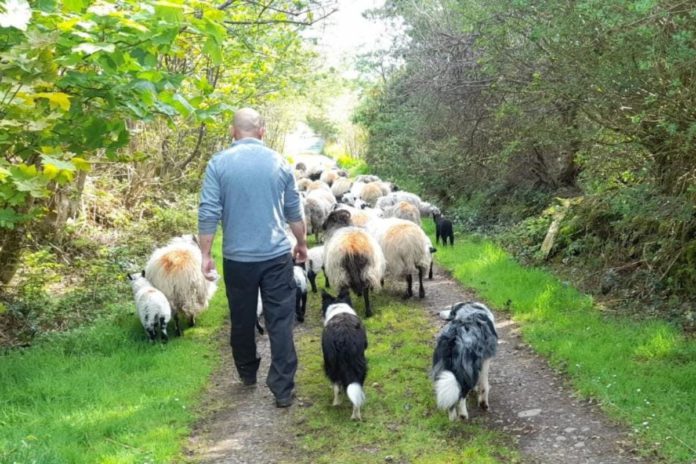 ‘No one is in sheep farming for the money, so you have to love the hardship’

“My father was originally from England and moved over here when he got married in the 80s. He had no farming experience and inherited the place from a relative shortly after moving here.

I had moved to the UK in my early 20s to study and work and returned in my mid-30s with my wife and kids because we wanted to raise our family in the countryside.

We have kept sheep under my father’s flock number for years, but my wife, Sarah, completed the Green Cert last year. So, we rented a farm, applied for our own flock number and began sheep farming on our own.

We used to have a small milking herd, 12 cows or so in the early 90s. I remember helping with the milking.

We had a small electric milking machine that milked two cows at a time. The cows were tied in stalls, and you had to push the machine along behind each pair as they were milked.

The feeding and cleaning out was all done by hand with a spade and wheelbarrow.

There was no drinker system, and cows were watered by filling buckets of water from a tap at the end of the shed and watering each stall individually.

I remember doing this job at night in the winter when it was dark outside, listening to Top of the Pops and the rain belting off the tin roof of the shed.

When we d finished our chores, we turned out the lights. My sister and I would sprint across the yard to the house, scared of getting caught in the dark.

The family farm was a mixed farm. It is a small dairy turned to beef stores with sheep and midseason lamb. Our family always kept poultry and sold eggs and turkeys for Christmas. Furthermore, we fattened pigs over the summer, and there was always a donkey or two and a horse about the place.

We farm sheep now. We find it easier to concentrate on one enterprise but would like to expand into cows in the future.

Furthermore, we hope to get older, hardier breeds of cattle such as Droimeans or Irish Moiled. These will graze the rough grasses better and control vegetation on the hills to try and prevent out-of-control wildfires.

My wife is a full-time farmer. She has a bakery and preserves business that she runs over the summer attending local markets whilst minding our three children.

The lease is in her name, and we farm it together. I am a fisheries officer and work full-time at that. I take my annual leave around busy times such as lambing, so I can be around full-time. 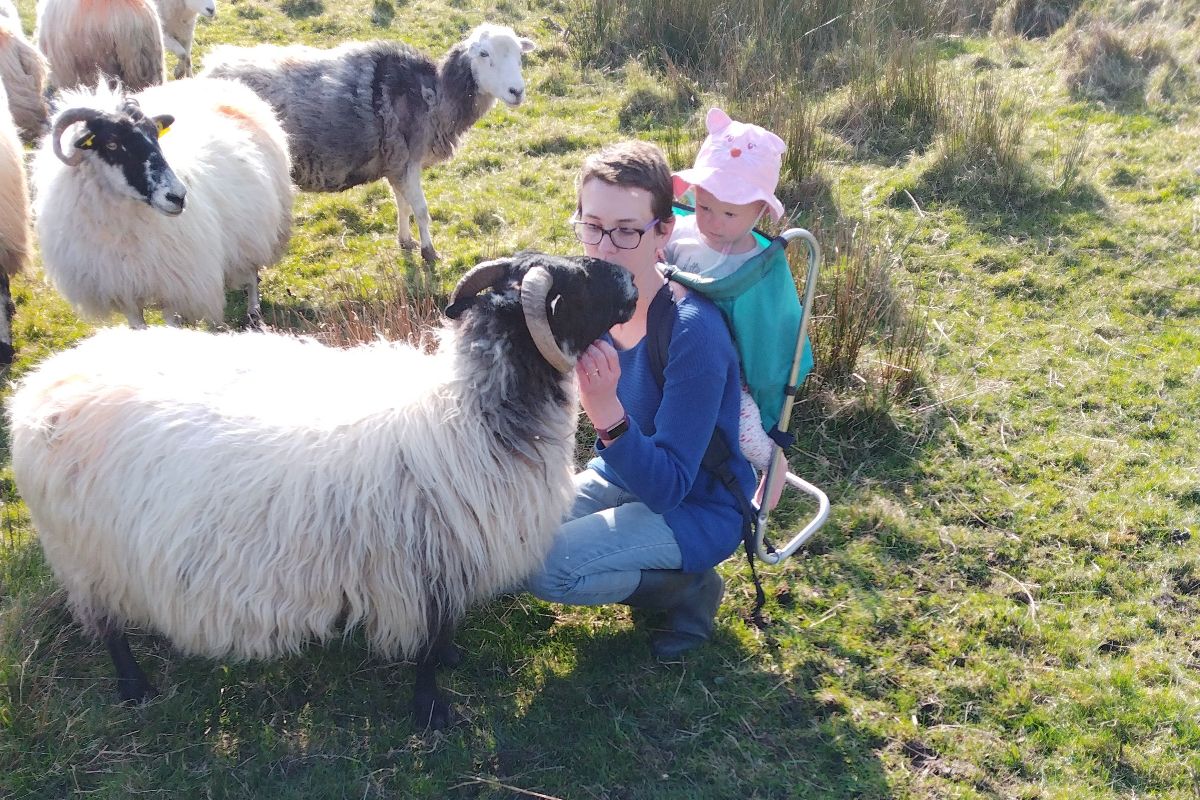 Our enterprise in Castlecove, in South Kerry, is a hill farm with a large share in a commonage.

We have a mixture of Mayo, Lanark, Swaledale and Scotch. None of the ewes are pedigrees, but we keep them on the basis of their mothering ability and survivability. We recently purchased a flock of Herdwicks for trial.

We run a Lanark and Mayo ram to breed replacements. This year, we will use Bluefaced Leicester rams to breed mules as we believe these will be more saleable than hill ram lambs.

We chose these breeds as they are proven successful in these types of areas. They are hardy and good mothers, which reduces the workload at lambing.

We have been building our flock for years. I bought 10 Lanark ewe lambs off a local farmer about 5 or 6 years ago. I bred from them and kept ewe lambs to build the flock. Besides, I have bought in ewes from other flocks, too, to boost the numbers. I always buy ewes from similar areas to this; these include South Kerry, West Cork, Mayo and Galway when looking for breeding stock.

In total, we have 70 breeding ewes plus 30 or so hoggets. Lambing takes place in springtime around St. Patrick’s Day for about a month.

Lambing takes place outdoors in fields as close to the house as possible to make the most of early grass growth. We house sick or injured animals. On the other hand, we do not use lambing cameras but have trail cameras to keep an eye out for predators around the lambing fields. 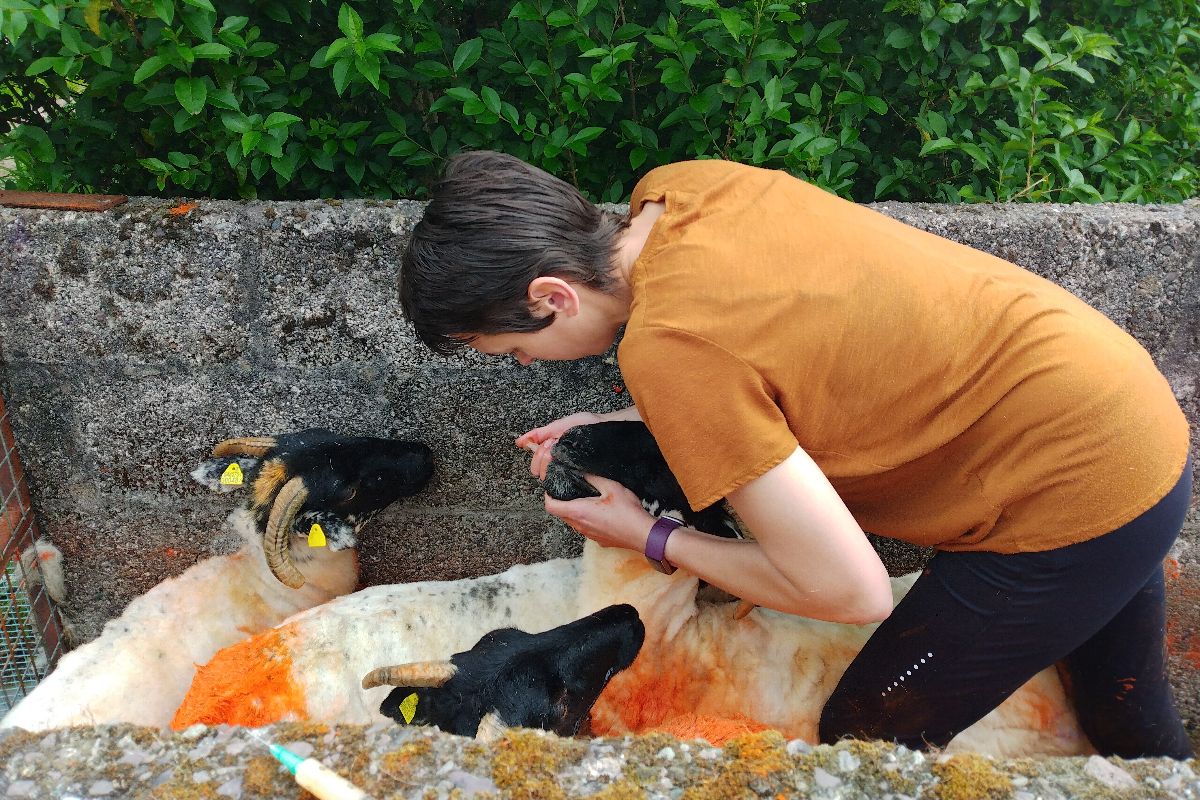 We would use an extra ram then recommended and have sheep in small paddocks with the ram to ensure they can get around them quickly.

Ewes are flushed on good grass and dosed and given minerals before rams going in, so they are in tip-top condition. We give rams four weeks to get everything done so that lambing is as compact as possible.

We sell ram lambs as stores in September and outwinter ewe lambs over the winter selling these as hoggets.

The most important trait for us is mothering ability. Poor mothering leads to a lot of losses at lambing, with lambs getting lost, chilled and predated.

Sheep will spend a lot of time out on the hill, too, so they need to be hardy enough to travel and find food up there.

I love lambing time. It can be exhausting, but it is the most involved part of farming. You are on the go from dawn to well into the night with pest control. 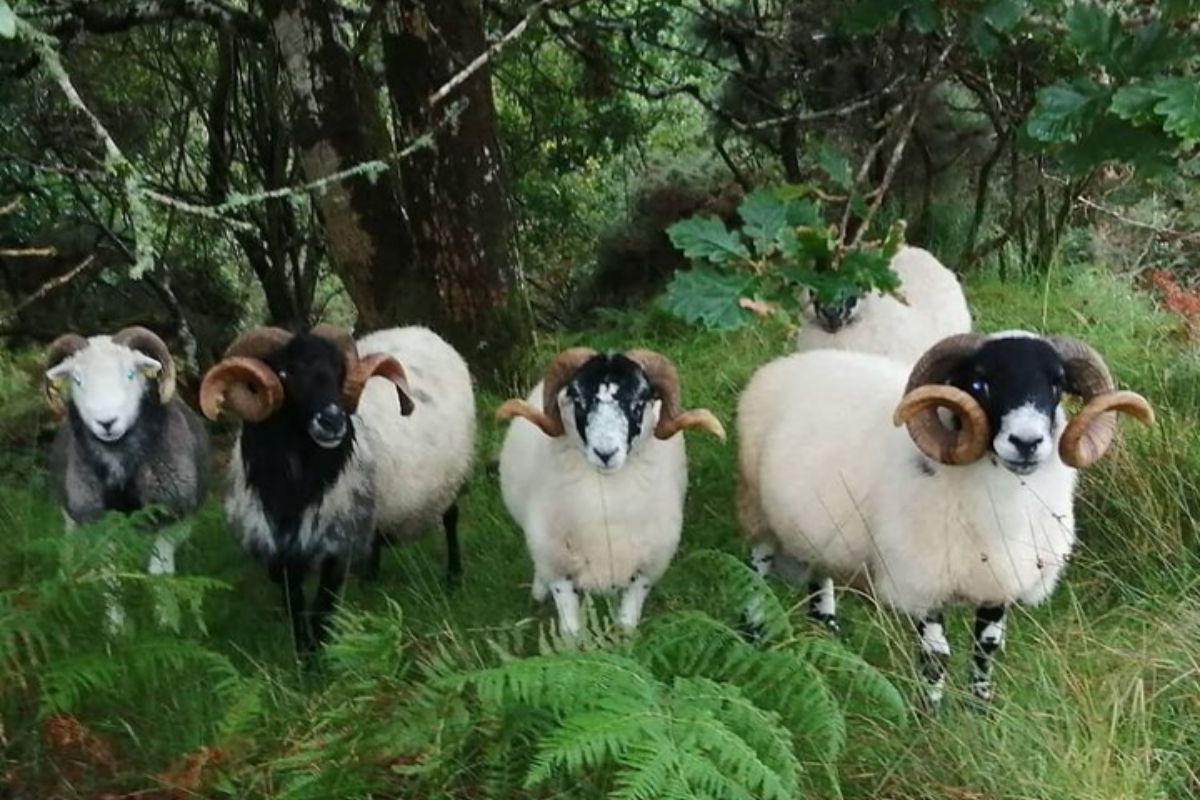 It is a time when all the neighbours are out farming, and there is a real sense of community.

People need my help shooting foxes and crows, and people are always looking for help lambing tricky ewes or colostrum for a lamb or some other problem that needs a second opinion.

It is a sociable time in the farming year. I like gathering sheep off the hill too. It is a wild, lonely place sometimes, but there is something about being up there on your own working the dogs that I find almost therapeutic.  I also really enjoy training dogs.

Hunting and shooting for pest control

I have had dogs my whole life for hunting and shooting, but I just keep sheepdogs now. We recently got a pup to train and sell on, but we got too attached to her, so she is staying now. I have trained a dog or two for other farmers.

On the other, hand, I studied countryside and wildlife management at college. I have always been interested in shooting, mostly for pest control and started from a young age, controlling foxes and crows. As a teenager, I kept terriers and lurchers for fox control and progressed into shooting.

I now shoot foxes over several farms in the area. First and foremost, we take preventative measures for foxes on our farm using a fox light with fox repellent oil on lambs.

We have a radio in the lambing fields and do regular checks; this seems to be effective. Any foxes then proving to be a problem would be controlled.

Deer stalking is a hobby of mine, and with the growing population of deer, it is becoming more of a necessity than a hobby now to control numbers now. 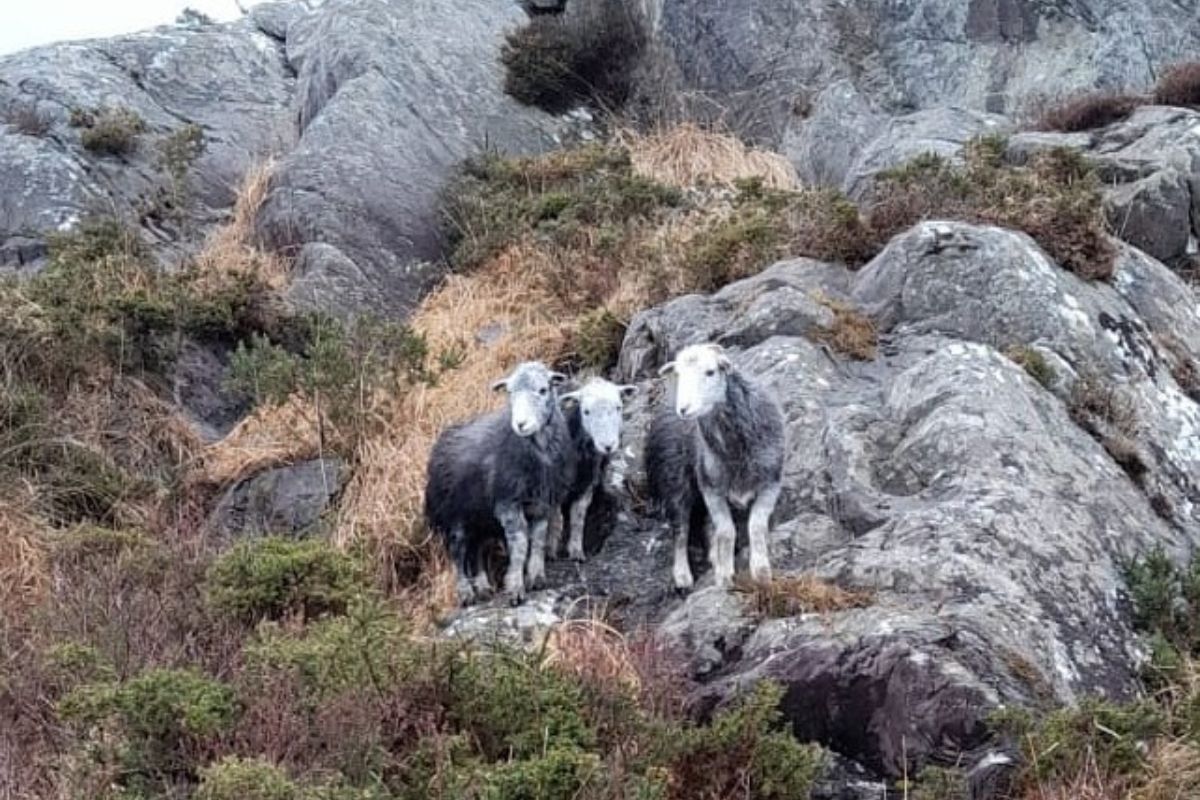 Public opinion is the most challenging part of farming. I feel farmers are being scapegoated for many issues that do not relate to the scale or the type of farming we do. The public is very miss informed about farming, especially small-scale family farms.

I am passionate about the land management side of farming. It has to be done responsibly with long term environmental goals in mind. Partaking in agri-environmental schemes such as the REAP is a very rewarding part of farming.

My wife takes care of all the important stuff like paperwork and form filling. She is also the on-hand midwife/vet at lambing time and looks after anything that needs an extra bit of TLC. My responsibilities are manual jobs like fencing, shearing and dosing etc. 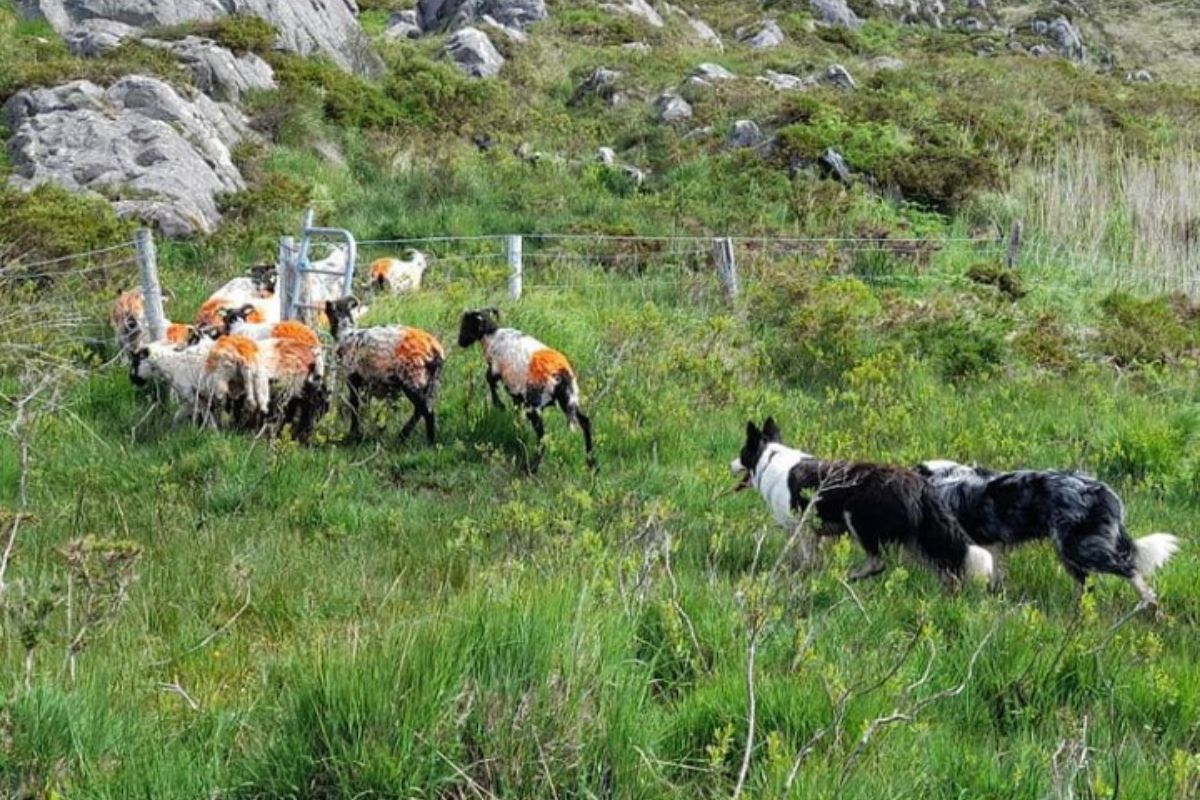 To be a successful sheep farmer, you have to be passionate about the place you are in and the animals you are farming. No one is in sheep farming for the money, so you have to love the hardship to succeed in this area.

There are probably many things we should have done differently, but then you would never learn anything. Experiencing things for yourself even if they fail is a great way to move forward. It is as important to know what does not work as much as what does work.

The thing I have enjoyed the most about this venture is how much my wife has taken to it, embraced it, and became successful.

She was a pure city girl when we met; I do not think she owned a pair of wellies. Now she has completed the Green Cert, helps with all the hands-on stuff and has even had neighbours bringing sheep to her that are stuck lambing, and she has managed to lamb these difficult cases. 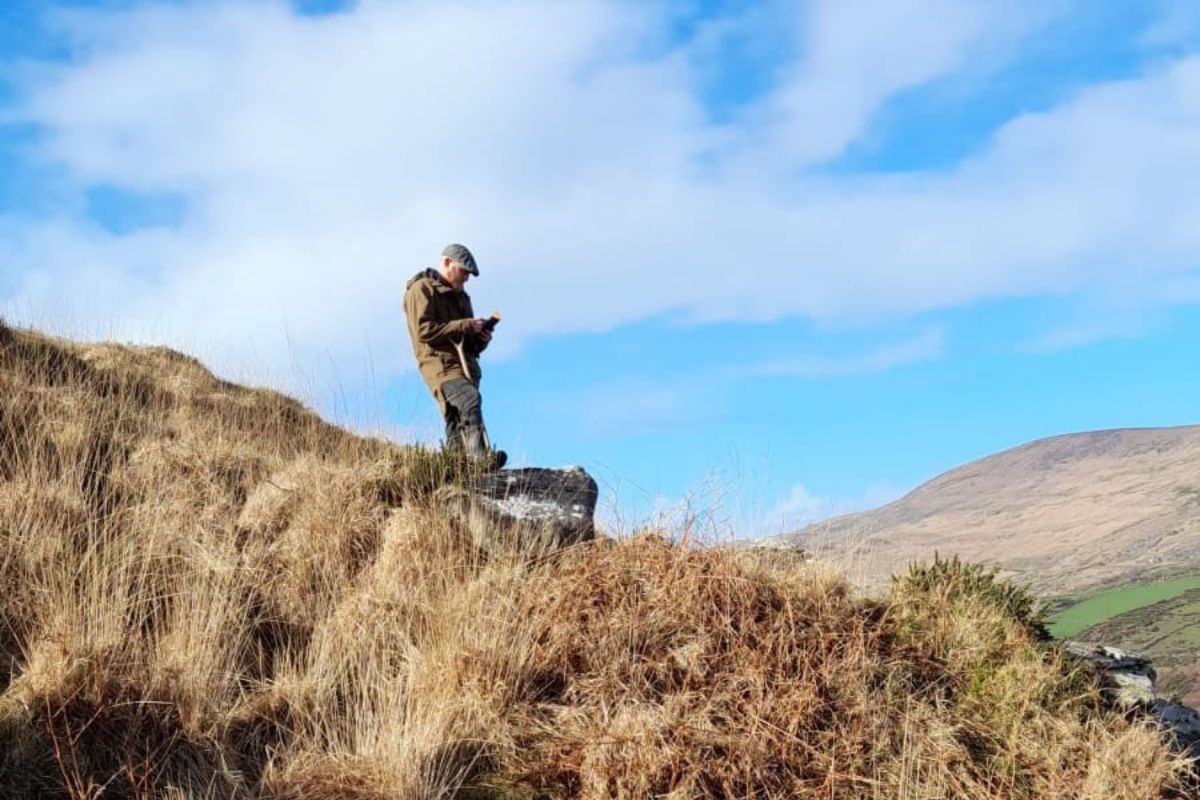 We hope to be successful at breeding mules both for finishing and for breeding stock. Also, we would like to produce meat boxes that can be prepared by a local butcher and sold locally.

Besides, we would like to trial a small lowland flock that we could lamb early indoors and finish the lambs rather than sell as stores, but this will be a few years down the line, I would say.

Furthermore, we hope to be continuing along the same path we are now, producing good quality stock.

Our ultimate goal is to produce high welfare lambs in an environmentally friendly way for a local market.

It has been challenging but rewarding. We would not want to be doing anything else. It has always been more about the lifestyle than the business/making money side of farming for us.

How to save small family farms

The future of agriculture remains to be seen in terms of how the CAP reform will impact small farms like ours. It would be nice if small family farms became viable again.

Consumerism has a lot to answer for as the drive for cheap foods pushes the need for productivity and the expansion of farms.

This leads to less room for wildlife and more chemicals, whereas small farms have a much lower environmental impact.

As they are not driven by profit, there is more room for better animal welfare. Consumers could save the environment and the small family farms by just buying local or buying Irish.”

- Advertisement -
Previous article
Floating wind farms could make Ireland a renewable ‘superpower’
Next article
What should I dose my beef cattle for at this time of year?