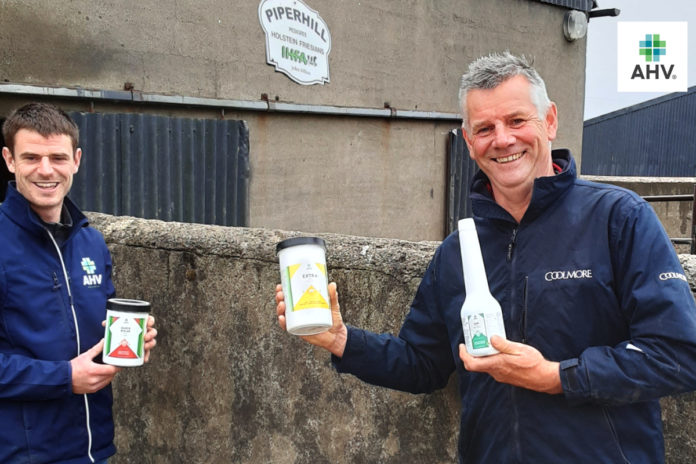 Co. Kerry dairy farmer, John Dillon, has been successfully using AHV products in a move to get away from using antibiotics for infections in his dairy cows, writes Richard Halleron.

He owns the Piper Hill Holstein herd and is chairman of the Kerry Friesian Breeders’ Club. His cows are split into autumn and spring calving groups; milk is supplied to Kerry Co-op.

“We are very tight for grass at the present time. Despite this, the herd is still averaging 30L per head per day.” John confirmed.

“The entire milking group was removed in the wake of a TB test seven years ago. I have been building up numbers again ever since.”

“There are currently 90 milking cows in the herd. I have scope to bring this number up to 100.”

Last year, John – who farms close to the village of Duagh, near Listowel – took a leap of faith in trying this new approach after he had contacted AHV.

The main health challenge on the farm was mastitis. John started by selecting cows that had shown up with high somatic cell count (SCC) due to sub-clinical mastitis, which were detected from previous milk recordings.

These cows received an AHV Extra Tablet. They responded immediately, with the subsequent milk recording confirming a significant drop in cell count, according to John.

“What’s more, this trend was maintained over the months that followed. Best results were seen from animals with recent infections within their lactation.

“I also used the Extra Tablet on clinical mastitis along with the anti-inflammatory called Aspi. This takes a bit of getting used to, as the Extra Tablet works very differently to antibiotics.”

“Some of the treated cows looked as if they were getting worse with more clots coming out, but I was told this would happen as the tablet is helping the cow to get rid of the infection herself. Once the clots cleared, the cows were perfect again.”

John’s decision to use AHV products reflects his very pragmatic perspective on the utilisation of antibiotics within a dairy farming scenario.

He explained: “If antibiotic-contaminated milk gets into a bulk tank, then the farmer responsible has to pay for the entire tanker load that reaches the dairy. This is real money. And this can so easily happen.”

John had recently treated a cow with mastitis shortly after she had been dried off.

“No matter how good the management systems on a farm are, it is always possible for a freshly dried-off cow to get mixed with the milking group.”

“If that animal had been treated with antibiotics, then the risk of contaminated milk getting into the bulk tank is a very real one.”

Results ‘speak for themselves’

The Kerry native first heard about AHV UK & Ireland on a visit made by members of the Kerry Friesian Breeders’ Club to Cappoquin Estate in Co. Waterford.

“The Cappoquin herd manager explained to us that they had achieved extremely significant reductions in cell count levels on the back of using the AHV products.”

“His perspective on AHV products resonated with me so much that I decided to contact AHV and put the Extra Tablets to the test. The results achieved speak for themselves.”

No milk excluded from bulk tank during treatment period

AHV use a new and innovative science to deactivate pathogens. This technique allows the cow’s own immune system to deal with the infection and to cleanse the infection out of the udder, which restores a healthy balance of bacteria in the udder issue.

The most obvious benefit of taking this approach is that no milk is excluded from the bulk tank during the treatment period and there is no tainting or abnormal smell off the milk.

John has also been using AHV’s Calf Start powder to help him get to grips with a Cryptosporidium problem that has been an issue on the farm for the past couple of years.

“We had been losing too many calves,” he stressed.

“On the advice of the AHV team, I have been mixing Calf Start in all the feeds given to the calves for the first 14 days of their lives. This includes the first feed of colostrum.

“I also took the decision to separate all new-born calves for the first four days after birth, even to the extent of keeping them in separate sheds. I suppose you could call this a form of social distancing.

“The good news is that the combined approach I am now taking is helping to boost calf health on the farm, which is also beneficial during the whole lifespan of these animals.”

“Any step that I can take to reduce antibiotic usage is good news for my own farm business and the Irish dairy industry as a whole,” John concluded.

AHV provides a bespoke advisory and back-up support service to all its customers.

Farmers need to be educated on how these new solutions work and what farmers can expect to see after administering AHV products.

It takes time to understand and build up confidence in using the products as they are totally different to traditional methods.