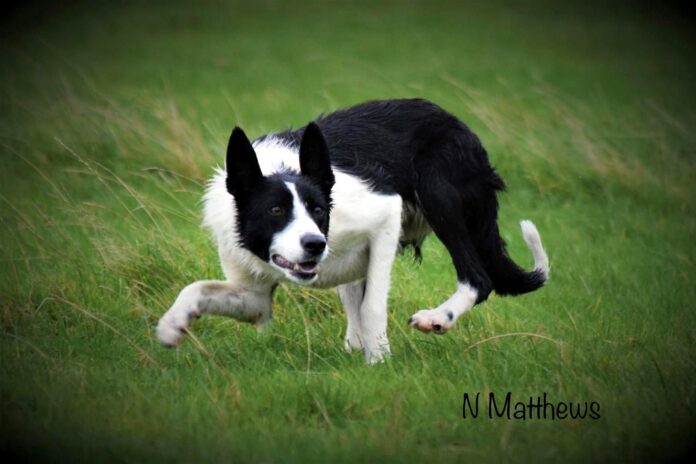 Welsh vendors were “well to the fore” at Skipton Auction Mart’s final working sheepdog sale of 2022, which it staged in a timed online format.

Once again, leading handler and triallist, Dewi Jenkins of Tynygraig, Ceredigion, headed prices as was the case in the past at both live and online sales at the North Yorkshire venue.

He led the charge at £7,000 with his fully-broken 20-month-old bitch, Mwnt Pip, a daughter of his main stud dog Jock, the reigning 2022 International Supreme Champion, and with whom, he also represented Wales at this year’s BBC One Man and His Dog final.

Out of a dam from young, up-and-coming fellow Welsh handler, Teifion Morgan of Pencefen, Mwnt, near Cardigan, Pip found a new home in Belgium.

She heads to another renowned breeder and triallist, Jo De Meyst from Zwevezele, between Antwerp and Gent.

At £5,700 and heading the part-broken prices was another regular Skipton sale topper from Wales and one of the best-known names in the business, top breeder and triallist Kevin Evans, of Llwynfedwen, Brecon.

The promising trials prospect was claimed by L Buchanan of Roscolban in Co. Fermanagh.

This is a “well-bred” daughter of his 2021 Supreme Champion and winner of this year’s One Man and  His Dog Final, North Hill Tess, herself a daughter of Derwen Doug.

By Kemi Ross Jnr, the third top price performer, returned to southern Ireland with Gerard Harrington of Eyeries, situated at the foot of the Slieve Miskish mountains on the Beara Peninsula in West Cork.

Leading the unbroken prices at £4,000 was yet another Welsh vendor, Sara Oliver, of Welshpool.

She sold her black and white bitch, Cloddiau Jess, a four-month-old son of Clwyd Bob, another top performer from Dewi Jenkins and himself, a son of his 2022 Supreme winner Jock.

Close behind at £3,900 and again from Wales was Brecon’s Tim Thewissen with his fully broken nine-month-old black and white bitch, Cefneithin Sky.

This entry was by another Kevin Evans trialling star, Tanhill Glen, a dual European Nursery and Royal Welsh Champion, out of SC Jones’ Freebirch Mist.

This entry was by her trials dog, Moor Lodge Ben, who has long been used to gather sheep on the Skipton trials field at live working sheep dog sales.

Out of her own Gyp, Jim, who has won nursery trials both this and last year, went to Lincolnshire with Market Rasen’s Jane Coulson.

Next at £3,200 was Leicestershire’s John Porter, of Astley, with a tri-coloured bitch, Meg, a January-2020 daughter of D Henderson’s Burndale Brad.

This, too, went to local Red Rose purchasers, WH&JW Hartley in Colne.

Back with the Irish vendors, Neil Harrell, of Cloontagh in Co Donegal, achieved £2,900 with his part-broken July-2021 black and white bitch, Sal, by fellow Irishman Pat Byrne’s Moss, out of his own Kim, which became a second Jo De Meyst acquisition.

Again from Wales and catching the eye in the unbroken section with a £2,100 price tag was Jess.

She is an 11-week-old red and white bitch pup from West Glamorgan’s Lyn Howells, by his own red and white Boss, which also went to Sweden and Stockholm’s Denise Robrandt.

“35 successfully went under the online hammer, and principal prices ranged from £2,100 up to a top call of £7,000,” the spokesperson added.