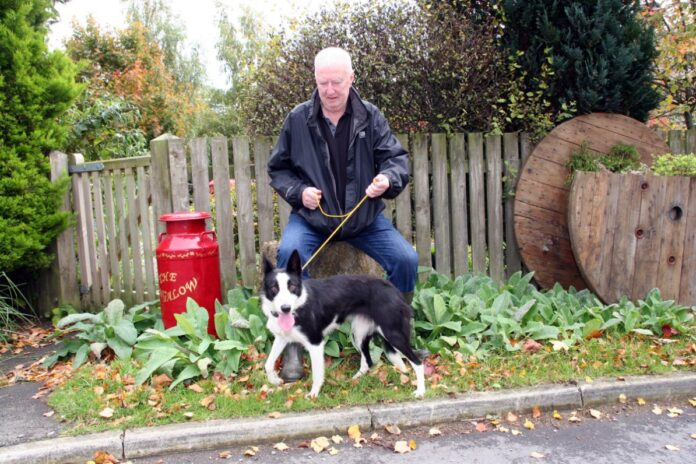 She is by Llangwyn Target, bred by legendary Welsh triallist, Aled Owen, out a Del, from near neighbour Chris McNaughton.

McAllister terms himself a hobby triallist of many years standing and saw Belle, who has been in his hands for nine months and further trained on at home, fall to telephone bidder Nigel Watkins of Llanddeusant in Carmarthenshire.

Watkins remains one of his country’s top-performing sheepdog handlers and triallists, having represented the Welsh National team on multiple occasions over four decades.

It is understood that he is retaining Belle as a potential nursery prospect.

First on to the trials field was South Yorkshire’s Stuart Wilkinson, from Thurgoland, with his 30-month-old black and white bitch, Meg, by Lad, from James Howard, based some 15 miles away in Holme village, Holmfirth.

Lad finished fifth in the 2019 Supreme Championship, while his own sire, Wisp, was English National Champion and dual English and International Drive Champion in the hands of Mr Howard, the great grand sire being Aled Owen’s World and ISDS Supreme International champion, Bob.

Meg’s own dam, Kate, who is with Mr Wilkinson’s son, Alex, is herself a great granddaughter of Wisp. Mr Wilkinson, a respected triallist of 40 years standing and well-known judge.

He adjudicated at this year’s English National – saw Meg, who has already placed in nursery trials and produced her own litter, sell online to R&N Barclays of Insch in Aberdeenshire.

The very next entrant to take to the field and also claiming 4,000gns was the January-2021, black and white dog, Wern Jim.

This entry was from Dewi Jones, who runs Welsh sheep in Abergele on the north coast of Wales.

Close behind at 3,950gns was another Skipton regular, Willie Torrens, of Killen, Castlederg in Co. Tyrone, with his nine-month-old black and white bitch, Kemi Dot.

This entry is a son of top Welsh breeder and triallist, Kevin Evans’ European Nursery Champion and dual Welsh and International Brace Champion, Derwen Doug, out of Karven Dot, herself a daughter of another classy Evans dog, Ace.

Dot was purchased on the field by first-time Skipton working sheepdog buyer, Cheviot sheep and Hereford cattle farmer Harry Barnes, from Rossendale in Lancashire, as a nursery trials prospect for his 21-year-old partner, Janine Ashworth.

Five other field-run dogs topped 3,000gns, and the best of them at 3,800gns was Gwen, an August-2021 black and white bitch from another familiar face at Skipton, Brynley Williams, of Holywell in Flintshire.

By his own Elwy Lad, out of Glan Y Gors Jess, Gwen caught the eye of Kevin Evans, who was present at the sale.

He also went to 3,200gns to claim another dog with his breeding, Hendre Tex, a 20-month-old black and white from Richard Crowe, travelling over from the Isle of Man.

Tex is by Kevin’s own Red Spot, acquired from Germany and proving his worth at stud, out of D Edwards’ Belle.

Arran Games, from Talgarth in Powys, returned to the venue to claim 3,100gns with his two-year-old black and tan dog, Lad, which made its way back to Wales with Brecon’s BE Jones.

Another regular vendor from Wales, Emrys Jones, of Tal y Bont in Gwynedd, made 3,000gns with his May-2021, black, white and tam bitch, Llwyn Sarn Sky, going north of the border to East Ayrshire with Dalrymple’s  Ian Lockhart.

“There was an 85% clearance rate among the 25 field dogs, with strong trade for well-broken entries.”

“While there was less demand for unbroken dogs, well-bred registered unbroken entries were still able to occasionally make four figures.”

Of the six out of eight youngsters successfully sold in the unbroken pen, topping at 1,200gns was G Brierley, from Rochdale, with his rising six-month-old red and white dog, Rock.

This is another by Kevin Evans’ Red Spot, out of Ruby, whose own sire was Littledale-based Ricky Hutchinson’s renowned International Reserve Supreme Champion, Sweep.

Ruby, who has already run in nurseries, was purchased at Skipton in May-2018, by Mr Brierley as an 11-month-old from Lancastrian Tony Birkett, of Carnforth, for 6,700gns.

At that time, it was a new centre record selling price for a dog under a year old.

Kim, a litter sister to Rock, also made £1,550 at Skipton’s online-only sale in September this year, with Rock himself selling locally to Oakworth’s Ian Ibbotson.

Also hitting four figures at 1,000gns in the unbroken pen was mid-Glamorgan’s David Meek with his January-2022 black and white dog, Wyverne Blue.

This is another son of Angie Driscoll’s Kinloch Sweep, out of the handler’s own Patch, herself by Serge Van Der Zweep’s World Sheep Dog Trials champion, Gary.

Blue also headed north of the border to join Stuart Urquhart near Inverness.

“The autumn sale once again cemented Skipton’s appeal as a leading centre offering dogs of all ages and abilities to suit all tastes and pockets.”

“The latest field sale was once again supported with real-time bidding, with working sheep dogs sales set to return to the North Yorkshire venue next February,” the spokesperson concluded.