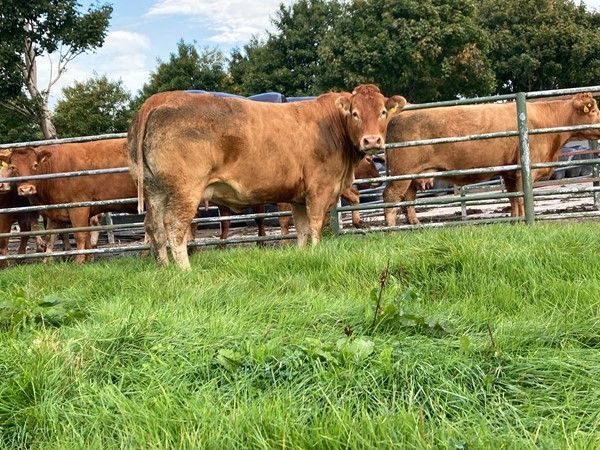 Some 60 in-calf cows will come under the hammer at the Skidoo commercial suckler herd’s dispersal sale this Friday evening, October 22nd.

Both autumn and spring calving will pass through the ring at Carnaross Mart, Co Meath.

The Skidoo name needs no introduction and is known in almost all farming circles – both at national and international level.

The herd’s primary focus – both in its pedigree and commercial capacity – has been ease of calving and strong ‘milky’ cows that would have a calf every 365 days, along with good fertility and strong feet and legs.

The commercial herd operated a split-calving system, with 60% of the cows calving in the spring, while the remaining 40% calved down in the autumn – using 60% AI and 40% stock bulls.

Donal remarked: “Given the farm’s location, we achieved an early turnout each year and made an effort to include as much grazed grass as possible in the diet.”

“We followed the Beef Data and Genomics Programme [BDGP] and had great success from it. This allowed us to breed an extremely fertile herd while not interfering with carcass weights or conformation.”

“By striving to breed elite female animals, this allowed us to improve the genetics year-on-year,” the Meath native added.

“We always used 5-star sires – whether that was in the form of AI or stock bulls,” he added.

Herd health is always top of the agenda on the north Co. Dublin holding. As a result, it implemented a strict vaccination programme protecting against Lepto, BVD, IBR, Blackleg, and Rotavirus.

The breeds used in the commercial herd were predominately Limousin and Charolais with some Simmental genetics.

The herd is scanned in-calf to both Charolais and Limousin AI and pedigree stock bulls – Keltic Neptune and Novinchristie Nicholas (both Limousin) – and Charolais bull, Skidoo Jonathan, while AI sires include: LM4050 and KCH.

When it came to selecting bulls and sires, it based criteria around maternal traits.

The breeding policy promoted an early-maturing animal and a medium-sized cow – with high figures for milk and fertility.

In Concluding, Donal said: “I would like to wish all the new owners the very best of luck with their new animals.”

“Furthermore, I hope they do as well for them as they have for us over the years.”

Finally, there will be prizes on the night for the top-priced seven cows.

Viewing will take place from 4:00 pm onwards, with the sale commencing at 6:30 pm. A sales catalogue is available by calling Ciaran in Tradeforus at 086-0683810.

- Advertisement -
Previous article
Annual feed bills across the UK beef industry could be reduced up to £12.5m
Next article
Lambs to €150 in ‘phenomenal’ trade at Kilkenny