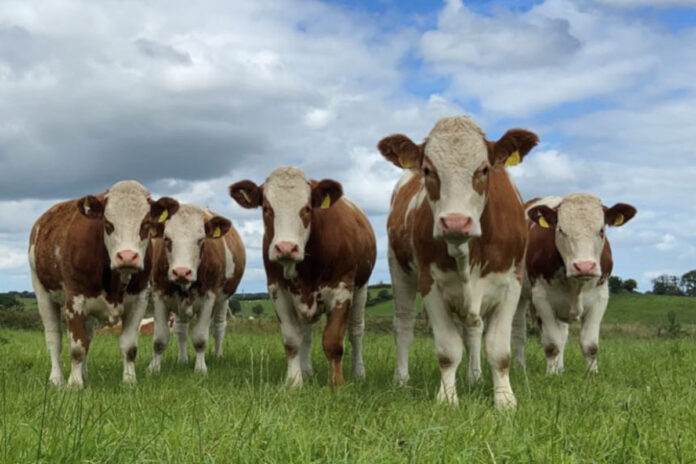 67 in-calf females, 95 maiden heifers and 15 weanling heifers will come under the hammer at its forthcoming sale on Saturday, October 8th, 2022.

Breeders held their first sale in the mid-1990s, and since then, new and returning breeders descend upon the west of Ireland-based mart each October for the club’s special sale.

Ahead of this year’s sale, a spokesperson for the Western Simmental Club told That’s Farming:

“Firstly, the Simmental breed is known for its maternal abilities. Replacement heifers/cows must have sufficient milk to rear their calves to full potential.”

“Simmental is the breed whose background guarantees milk supply. Secondly, being a continental breed that is very strong on growth rate ensures that offspring will mature early, well ahead of any 30-month deadlines.”

“Moreover, Simmental has the reputation as being a very easy calving continental breed. This is an attribute that is now more important than ever due to the increased number of part-time suckler farmers.”

“Having cattle that are easily handled and not temperamental adds to improved herd performance. This is an objective that is easily achieved by using Simmental.”

According to the club spokesperson, all heifers have been pre-inspected and are export-eligible on sale day.

You can view a catalogue for the sale via this link.

In recent weeks, the Irish Simmental Cattle Society confirmed the appointment of Peadar Glennon to the position of general manager.

Glennon previously vacated a role as the society’s chief operations manager for a general managerial position with the Irish Angus Cattle Society, whose head office is based in Carrick-on-Shannon.

Glennon began working with the society over two decades ago.

In a statement on Thursday, July 21st, 2022, a spokesperson for the society said:

“We are delighted to announce the appointment of Mr. Peadar Glennon to the role of general manager. We look forward to continued success under his stewardship.”