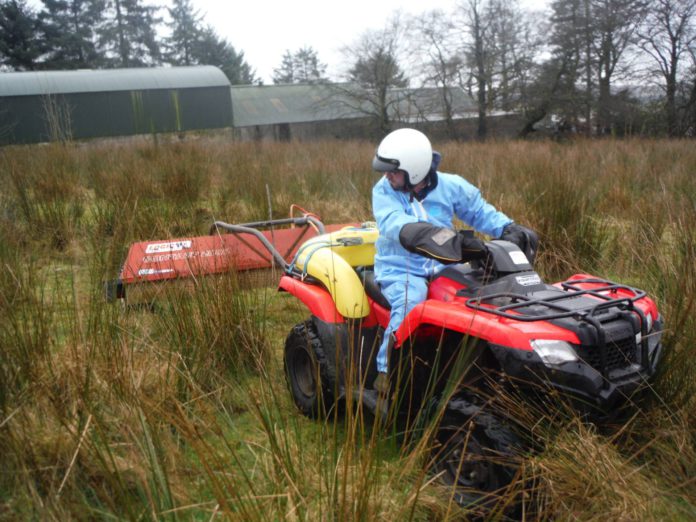 Similarities between keeping safe during Covid-19 and farming safely

Regina McBarrett, an agri-environment adviser at the College of Agriculture, Food and Rural Enterprise, believes there are similarities between keeping safe in the midst of a deadly pandemic and operating a safe farm.

She said: “When one looks at two of the groups impacted by COVID-19 during the past three months, the parallels with farm safety are similar.”

“The over 70s were one of the groups most in danger, and young children are severely impacted by both Covid-19 and by potential dangers in the working environment present in any farmyard across the country.

“At this time of year, work activity on farms is largely dominated by three words beginning with the letter ‘S’ – ‘Silage, Slurry and Spraying’. And, this means that the key messages around farm safety are critical, the agri-enviroment adviser pointed out.

Farmers, she added, are highly familiar with the overarching safety messages captured in the term ‘SAFE’ – ‘Slurry, Animals, Falls and Equipment’.

This, she outlined, is a message that should be at the forefront of our minds when we reflect after a day’s work and begin to plan for the next day.

“Farmers, to their credit, are more safety conscious and vigilant now than ever before.”

“But as with many life lessons, this education has come the hard way through the loss of family, friends and neighbours.

“The catalogue of farm accidents still remains too high despite a greater awareness and an undoubted willingness to implement best practice.”

“It’s the space between the will to act with safety in mind, and the rush to complete tasks, where risk-taking lies and those momentary lapses in concentration which lead to severe injury and death on our farms.”

She said the analysis of the statistics from the Health and Safety Executive Northern Ireland relating to farm accidents show a positive trend from a grim baseline.

Over a three-year period from 2017-2019, sixteen fatalities were recorded on farms.

“While the figure is down from the twenty deaths recorded in the period 2014-16 and 28 in the period from 2011-13, each and every live lost is undoubtedly one too many and accepted as such.”

“The farming community knows all too well the impact of lapses in concentration regarding SAFE.”

However, it should be noted that all items present great risks, equipment causes most fatalities.

“The intergenerational aspect of farming shows us all the need to protect the most vulnerable.”

“The elderly can become complacent through time – especially the more often they complete a routine task. The young blend exuberance and naivety despite undoubted agility.”

“Together they can and will learn from each other. The average age of farmers across Northern Ireland is 59, but the majority of fatal farm accidents involved those over that age.”

“While death is the ultimate tragedy for a farming family, one in every 20 farms have a workplace-related incident requiring medical attention each year and of these one in five required hospital admission.”

Message has not changed

McBarrett said the cancellation of key farming interaction and social outlets may have reduced the opportunity this year to reinforce key safety information, education and enforcement messages, but the message has not changed.

The sharing of irresponsible social media posts promoting unsafe practices should serve to strengthen the resolve for a safe farm culture, she added.

“A further lesson from the Covid-19 experience is the sense of personal responsibility for hand sanitisation and hygiene that has now become accepted practice and is second nature to all.”

“Getting our behaviour to mimic our understanding of best practice is now engrained. The challenge will be to replicate that in a working farm environment.”

“We not only can but must assess the risk, create the environment that minimises risk and train everyone to implement the best safety procedures we can.”

In doing so, she concluded, we will indeed stay ‘SAFE’, ‘stay alert and stay alive’.