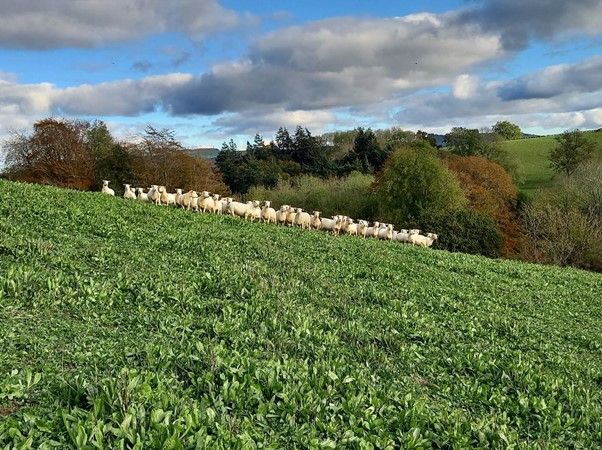 Red clover can have positive impact on ewe pregnancy rates

Nitrogen-fixing plants can benefit farm businesses and the environment without impacting sheep fertility.

That is according to research on red clover, that four farmers have conducted in conjunction with ADAS in an Innovative Farmers field lab.

They found that grazing ewes on herbal leys containing the legume can even have a positive effect on pregnancy rates.

Their research challenges some beliefs that clover can cause temporary infertility in ewes when grazed during the breeding season.

But this winter, these farmers, in the West Midlands and Powys, grazed their sheep on herbal leys with an average of 17.6% red clover.

The field lab involved choosing a group of ewes for the trial and splitting them into two halves.

They grazed both groups for three weeks before tupping and throughout the mating season, and then scanned them for pregnancies.

Furthermore, they assessed swards for clover content, with fresh weight samples taken when the sheep are initially put on the fields, when the rams are put in, and when the mating period ended.

They grazed one half on grass leys with no red clover, and the other on herbal leys.  containing the legume.

Seed mixes containing 10% red clover were used for each sward, which resulted in fresh weight samples showing an average of 17.6% red clover.

The highest red clover percentage they found in fresh weight samples was 36.9%. This was only found on the one farm that grazed sheep on the red clover in its first year.

Red clover rates in fresh weight samples are usually higher in the first year, with the plant usually being outcompeted by white clover as the sward gets older.

Most triallists had already established red clover on farm, but one introduced it as a new sward last summer.

According to the research, on average, ewes in the control group scanned at 170%. Meanwhile, ewes mated on swards containing red clover scanned at 181%.

Senior consultant at ADAS and sheep farmer, Gillian Preece, said this positive result will likely have been due to the sheep eating a more diverse diet.

The herbal ley contained a variety of other plants including chicory, plantain, and wildflowers, which are good for nutrition.

Red clover is more effective at fixing nitrogen in soils than its relative white clover. Therefore, it could also be a good option for farmers looking for alternatives to artificial fertiliser.

As red clover establishes quickly, farmers could sow it this spring and graze sheep as early as late June.

Farmers can incorporate it into existing pasture or sown within a new grass or herbal ley to fix nitrogen following a previous arable crop or as a grass reseed.

How to reduce reliance on nitrogen fertiliser