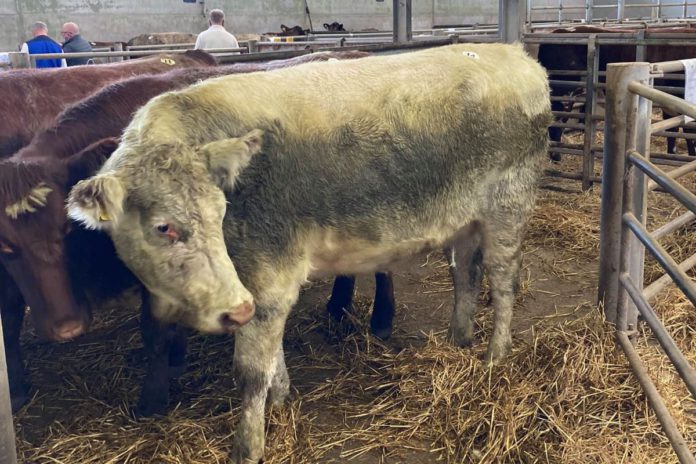 Prices peaked at €3,450 for a Glounlea Dewdrop in-calf heifer by Blackvalley Starlight and in-calf to Glounlea Duke, on Saturday, October 2nd, 2021.

According to Michael Conway, club secretary, “an impressive” line-up of 21 in-calf heifers levelled at €2,000.

Next in the trade stakes with a top price of €2,240 was a maiden heifer, Clonina Lacey, by Doon Jupiter. He reported that maiden heifers “were in high demand”, with a 90% clearance leaving an average price of €1,400.

The top-priced weanling heifer was a roan, Cloonmaccon Cherry, by Ballyart Lucky with a price tag of €2520.

“There was strong bidding both ringside and online. Buyers from all corners of Ireland, including Northern Ireland, were present.”

“There was keen interest from both pedigree and commercial buyers,” he added.

“This year, we saw an increased interest in the in-calf and maiden heifer classes. With 78 entries on offer, there was something for everyone. It is good to find that the market for Shorthorn genetics is growing each year.”

“Furthermore, we are delighted how the sale has grown and is now a date for the diary every year.”

“The success of our sale is down to the quality of stock that our sellers provide year in year out, especially this year, which resulted in record-breaking prices.”

“Finally, a special thanks goes to everyone at Clare Marts and the canteen staff for all their help every year.”

In a statement to That’s Farming, a spokesperson for Clare Co-operative Livestock Marts said:

“The annual Shannonside Shorthorn sale was held in Ennis and proved to be an outstanding success.”

“There were some fabulous prices achieved and a clearance rate of 93% achieved.”