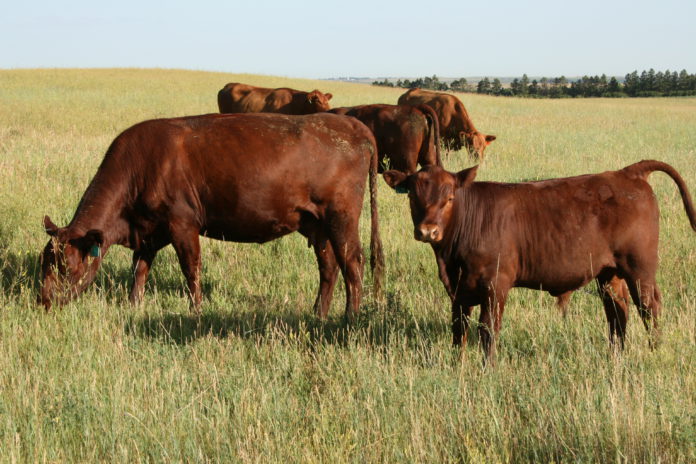 20-year-old Mack Buckmier lives on a 700-cow-calf ranch in North Dakota in the USA.

He farms Red Polls, Simmentals and SimAngus alongside the main herd of cattle, which is owned by his father, Rob, and uncle, Ron.

“My dad and uncle, whose parents were teachers, built most of the ranch. Their great-uncle and grandparents also farmed, so we have some ground with family history back to the 1930s.” he explained to Catherina Cunnane, editor of That’s Farming.

Mark is a full-time agricultural engineering student at North Dakota State University and helps with the family excavating business whilst farming.

“I chose to steer in the direction of Red Polls because I like their maternal look.”

“They are efficient converters of forage, and can easily handle the harsh climate of the northern Great Plains.”

“Additionally, they have excellent, high fat milk which allows calves to grow well without the added expense of creep feed.”

He began with AI using semen from a former national champion bull and has since switched over to utilising a stock bull. “My bull is now aging, but I have a very promising bull calf that I hope will be his replacement.”

“We calf in the latter half of March. This timing allows us to avoid most of the frigid temperatures, though late blizzards and cold waves still happen regularly, but we still sell large calves in November.”

“I like a medium-sized cow, 530-540kgs, which is easy and safe to work with while being protective enough of her calf, level, deep, full flanked, and with above average milk production.”

He believes breeding females should also be able to maintain condition while raising a large calf and breed back readily, he added.

The young farmer has sold some bull calves with some females retained as replacements, while the rest are sold.

Replacement females are bred beginning at 14-15-months of age and calve down at 24-months.

“A compact calving window is essential for a uniform group of calves in the fall. I use a Lutalyse injection to synchronise my herd and sell those cattle which fail to breed after two cycles.”

“The key elements of running a successful suckler enterprise in my mind include reducing costs, always improving genetics, striving for uniformity, and maintaining animal health.”

“It can be a bit of a challenge to juggle work, school, and my cattle. When school is in session, I travel 5 hours one way to be home helping most weekends. The cattle are what I truly enjoy.”

“Farming and ranching in southwest North Dakota is, I would imagine, not all that different from agriculture in the rest of the world.”

Pasture and field sizes range from 80 to 320-acres in size with 10-15-acres required for each cow-calf pair for the grazing season.

“In South Dakota, where part of my family’s ranch lies, open range is accepted. The cattle there get to run on around 4,000 open acres.”

“Most producers are commercial, and very diversified. It is common for people, farm, ranch, and run another business of some sort, to make ends meet.”

Farming, he added, has historically been mostly wheat, barley, and oats, but corn, soybeans, and sunflowers have recently become popular with the decline in wheat’s value. “The number of trees which were not planted can be counted on one hand. It is a very open, rolling prairie.”

He is currently turning his attention to improving his herd’s milk production and weaning weight. “I will focus on increasing the size of my cattle while keeping costs down. It is very important, at this stage in my life, that costs remain minimal.”

“We have an ever-increasing population to feed, and I feel that beef production will not lose its importance.”

“In America, we need to remove the power from the ‘big four’ beef packers. They have a monopoly on the industry, and we are at their mercy.”

“Country of origin labelling needs to be straightened out and implemented. Finally, corporate farming needs to remain illegal as it is in my state.” Mark concluded.

- Advertisement -
Previous article
A Day in the Life: Seamus Millea
Next article
Suffolk-cross hoggets top of the day at Baltinglass