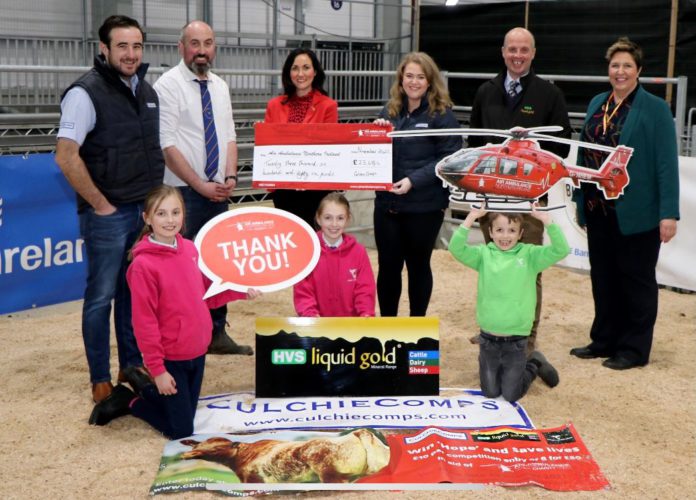 Organisers sold entries for the competition online and at Balmoral Show and Omagh, Ballymena, Kilrea, Markethill and Hilltown marts.

According to organisers, there were almost 4,000 entries, and they handed over net proceeds of £24,686 to the charity at the recent Beef and Lamb Championships event.

“This was a fantastic partnership that has generated an incredible result.”

“Thank you to Niall and Megan at Culchie Comps who gifted endless hours to this competition, including four full days promoting the competition at Balmoral Show and managing all competition logistics, to James Alexander at Jalex Livestock for providing us with the beautiful animal and to Paul at HVS Liquid Gold for sponsorship.“

“We’d also like to thank Balmoral Show and the marts in Omagh, Ballymena, Kilrea, Markethill and Hilltown, as well as our volunteers who helped us there with competition entries.”

“The heifer ‘Hope’ now has a new owner, Brian McKenna from Co. Tyrone, who is delighted with her.”

She said the funds would help the air ambulance medical team reach another eight patients, for whom “the worst has happened”.

“This project was all about raising as much as possible for the air ambulance service.”

“Megan and I admire the service. This became all the more real when we saw the helicopter land close to home one evening driving home from Balmoral show.”

“It feels good to know the difference it will make to someone in need; it could be any one of us.”

The Helicopter Emergency Medical Service has been tasked on 2,547 occasions since it started just over four years ago.

It operates 365 days and is a partnership between Northern Ireland Ambulance Service and the charity, Air Ambulance NI.

The charity needs to raise £2m each year to maintain and sustain this service.

Currently, the charity is appealing for support for its Christmas Campaign, including the sale of Christmas cards and baubles online.

- Advertisement -
Previous article
Farm building dating back to 1840s restored to former glory
Next article
Opinion: We are serious trouble when it comes to afforestation targets