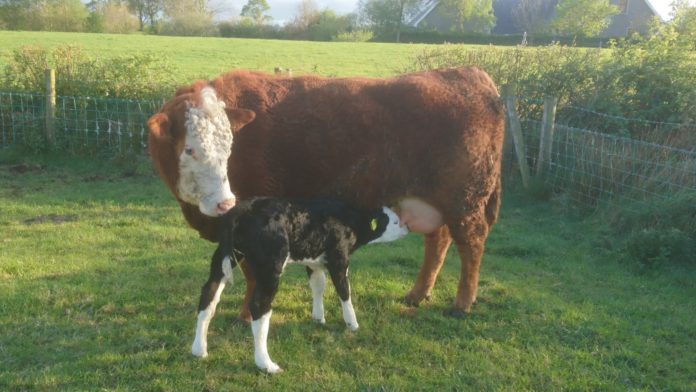 As we enter August, many suckler farms will be turning their attention to autumn calving. Being well prepared before calving starts will help to ensure a successful season.

Noel McNeill, beef and sheep adviser at the College of Agriculture, Food and Rural Enterprise (CAFRE) said: “The first thing to look at before the calving commences is the body condition score (BCS) of the cows.”

“BCS is an important measure indicating how fit a cow is at calving in order to minimise calving difficulties, whilst optimising health, welfare and subsequent fertility. Managing BCS effectively will also have a positive impact on reducing production costs.”

No extreme changes to diet

With calving imminent, no extreme changes should be made at this stage to the cow’s diet to change BCS as this can lead to further issues at calving to both the cow and calf.

Noel added: “Restrict feeding a fatter cow in the final weeks leading up to calving can result in the cow losing condition rapidly, but there will be little impact on the calf size resulting in calving difficulties.”

“After calving, the calf may also be weaker and the cow’s colostrum/milk quality and production will be poorer, he added.

“In terms of thinner cows, increasing the rate of feeding in the final weeks will not improve the cow BCS, but instead, lead to calf size increasing and again leading to issues at calving and after birth.”

Cows will be grazing before calving and should be able to meet their protein and energy requirements from grass, though with ever-changeable weather conditions, these levels can fluctuate.

It is, therefore, practical to give cows’ access to supplementary pre-calving minerals, either in powder form or in a lick bucket.

Noel McNeill continued: “It is important to ensure the right type and level of pre-calving mineral is used and these should be introduced at least four to six in advance of calving.”

It is also important that you blood test cows at various times throughout the year so that the correct minerals are used, and that unnecessary expense is not incurred.

Cows that have been grazing all summer should be in a fit condition, even after the drought experienced in late spring/early summer as there has been good grass growth since.

With cows hopefully being in the correct condition, they should be able to calve unassisted, however, it’s important not to be complacent.

Part two of this segment will be published in the coming days.