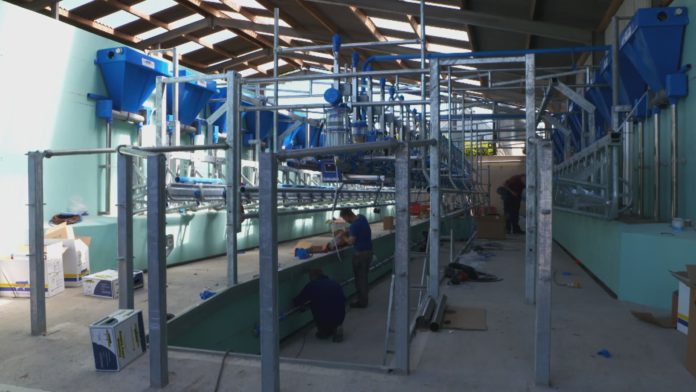 Reducing milking time from 7 to 3 hours per day

The next episode of UTV’s Rare Breed – A Farming Year, which continues on Thursday at 8:30pm on UTV, features five farming families, with everyone involved in outside activities, despite the mixed June weather.

In Crossgar, Robbie and his 3-year-old son Angus, are weaning and checking piglets together. “He’s a great helper, one for the future,” Robbie remarks.

While they work, he talks about the importance of farm safety and “needing eyes in the back of your head”, but Robbie does say that already Angus follows the ‘do’s and don’t’s’ around the yard.

Robbie’s new baby is born during Balmoral Show week, which is “not great timing!”, he jokes.

Fencing and installing a new parlour

In Bushmills, David and Dad Victor are fencing fields in very ‘un-June-like’ wet weather. As they work to protect mosses and wildflowers, Victor points out, “It’s not a fencing scheme, it’s an environmental farming scheme.”

It’s time-consuming and hard work, but they feel it’s a vital job to care for the peatland on their farm. David jokes that he’d like a step counter to see how many miles he clocks up in a day, while his dad prefers to sit in the tractor!

In Cloughmills, it’s all systems go on Wallace Gregg’s farm, with the installation of the new milking parlour well underway. New kit has arrived from Kerry, and Wallace explains what the extra capacity will mean for him and future generations. The main bonus is that once complete, the new parlour will cut down milking from 7 hours a day to just three.

Meanwhile in Antrim, Mark McConnell and his two daughters introduce viewers to more of his menagerie, starting with the llamas – he has a full herd now after buying one out of curiosity 10 years ago.

He talks of the growing interest in llamas, especially in how useful they are proving in protecting sheep.

Daughters, Caroline and Olivia, proudly show off their goats and pony and are a dab hand at looking after both.   Mark points out that they love helping out and that they are not scared of the animals as a result.

Finally, the audience meets the future of beekeeping, with Chris giving some last-minute tips to three young local people who are heading off to Slovakia to the World Young Beekeeper Championships.

He points out that beekeeping is “no longer the sport of an old man” with these young people demonstrating their comfort with, and knowledge of, the bees in their care.