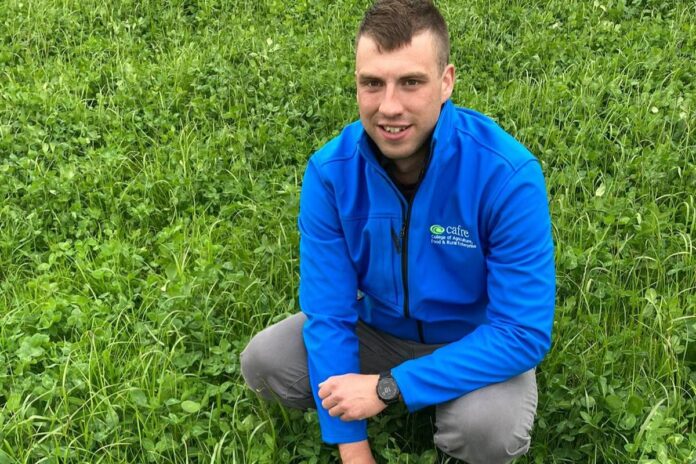 How red clover can reduce reliance on meal and fertiliser

In this article, Adam Jones, CAFRE Beef and Sheep Adviser, discusses the potential benefit of red clover as a long-term mitigation.

With concentrate and fertiliser prices hitting record highs, establishing a red clover sward could be one option in reducing your farm’s reliance on fertiliser and bought-in concentrates.

It also gives the option to finish lambs at grass later in the season with little or no creep meal.

Red clover is slightly different from its white clover cousin. It grows upright and tall and does not creep and spread outwards like white clover.

It has a deep tap root which gives it excellent drought tolerance properties compared to white clover. Red clover also has the ability to fix nitrogen in the soil at around 150 -250 kg N/Ha per year.

Equivalent to between four and seven 50 kg bags of 27% N per acre. This means it requires no nitrogen fertiliser once fully established.

It can be grown as a monoculture sward, but most commonly, it is grown with either a perennial or hybrid ryegrass as a companion.

With all these benefits, it is difficult to see why it’s not more commonly grown across farms; however, it has a reputation of having poor persistence.

With careful management, correct weed control, and field selection, it should have a lifespan of three to four years.

Red clover can be sown as part of a full re-seed between April and late July in well-drained soils.

When selecting the field, ensure it has been red clover free for at least five years to reduce the disease and pest burden in the soil.

To make sure the field has the optimum soil fertility, carry out a soil test before completing the re-seed.

pH should be around 6.2, and phosphate and potash indices should be at index 2+. The field should be sprayed to kill off the existing sward and cultivated to achieve a firm and clean seedbed.

If Cambridge rolls are available, the field should then be rolled and left for three to four weeks until a green haze is visible.

Spray again with Glyphosate or use a light harrow to remove the green haze of weeds.

This is called a stale seedbed and will reduce the weed burden and the challenge to the clover and grass crop, especially as there are few clover-safe sprays available.

The seed should be planted at a rate of 15kg/ha (6kg/acre) for a monoculture sward and for mixed awards, 7kg/ha (3kg/acre) of red clover and 22kg/ha (9kg/acre) of grass seed.

The seed should be planted at the optimum depth of 10-15mm. Ensure the weather is warm but with a rain forecast to get the best germination and strong initial growth.

Again, the use of a Cambridge roller will increase soil-to-seed contact.

Once the crop is established, careful management needs to be considered to prolong the life of the red clover within the sward. With red clover growing from a central crown, it is imperative that this is protected.

If the crown is damaged, the plant will not recover and will die out. Ensure machinery is not used in wet conditions as this may damage the crowns and introduce the fungal disease clover rot or sclerotinia.

When the crop is cut for silage, the cutting height needs to be higher than 7cm (3 inches). This ensures the crown is not damaged.

Silage should be cut when at least 50% of the plants show red flowers; this will increase the quality of the silage.

Ensure the crop is dry at around 25-30% dry matter. Wilt if possible but do not dry out too much as this will result in the leaves and flowers falling off leaving tough stems.

One cut and light grazing

In the first year, it is advisable to only take one cut and allow only light grazing later in the season. This works best for lambs as there is a lower risk of poaching and damage to the crown.

In the second and subsequent years, two cuts may be taken, and grazing can still be carried out later in the season. Ensure lambs are gradually introduced to the clover to reduce the risk of bloat.

Ewes must be kept off the red clover swards and not fed red clover silage for six weeks on either side of tupping.

This is because the high levels of phytoestrogens in the red clover plants can have a negative effect on fertility.

Once the silage pit or bales are open it is important to get a silage analysis carried out to determine feed value.

If using standard silage analysis, quality is often far higher than the analysis suggests due to the manner in which the protein is preserved.

Ensure that a wet chemistry test is carried out by an approved laboratory to obtain the most accurate analysis results.

- Advertisement -
Previous article
The benefits of video marketing for Irish farmers
Next article
‘My health has made things more difficult, but farming is the best job in the world’