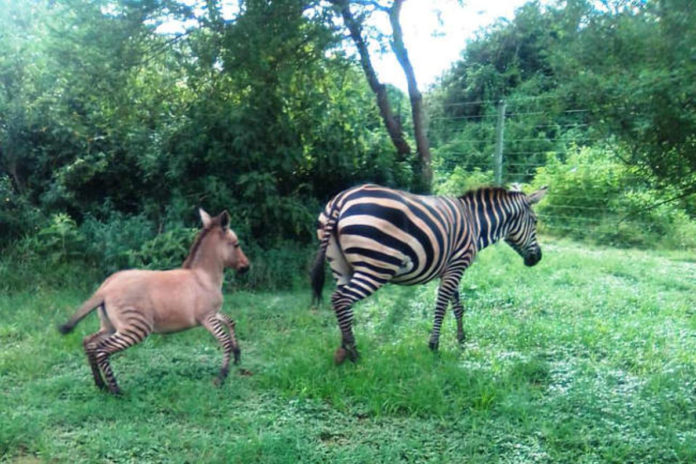 A hybrid of a donkey and zebra has been born in Kenya’s Chyulu National Park. The hybrid has been named as a ‘zonkey’, by the Sheldrick Wildlife Trust.

The animal was discovered after a zebra gave birth to an unusual coloured foal that lacked the typical zebra striping.

The hybrid was created when a zebra from Tsavo East National Park wandered into a community bordering the park. She stayed in the area for a few weeks, joining a group of cattle belonging to the locals, before being translocated back to the park by a team from the Sheldrick Wildlife Trust.

On the discovery, a team spokesperson said: “Earlier this year, our fence maintenance team caught a glimpse of the zebra with a tiny foal by her side. It wasn’t until several weeks later that we finally got a proper sighting of the pair.”

“While zebra foals are born with white and brown stripes that eventually turn black, this little one’s body was suspiciously light on stripes and overwhelmingly tawny in colour.”

“At first, we thought that it had just been wallowing in the mud bath, but then the truth dawned on us: Our wayward zebra had given birth to a zonkey!”

The zonkey combines the sturdy body of its donkey sire and the striped legs of its zebra mother, which makes for a striking creature, according to the wildlife charity.

“We’re happy to report that mum and baby are thriving. Their new home is in an area that isn’t plagued by heavy predation and thanks to the lush conditions, water and grass plentiful it is a good place to call home,” the statement concluded.

- Advertisement -
Previous article
Pedigree bull killed by Chinese lantern
Next article
VIDEO: How many sexed semen straws will I need?