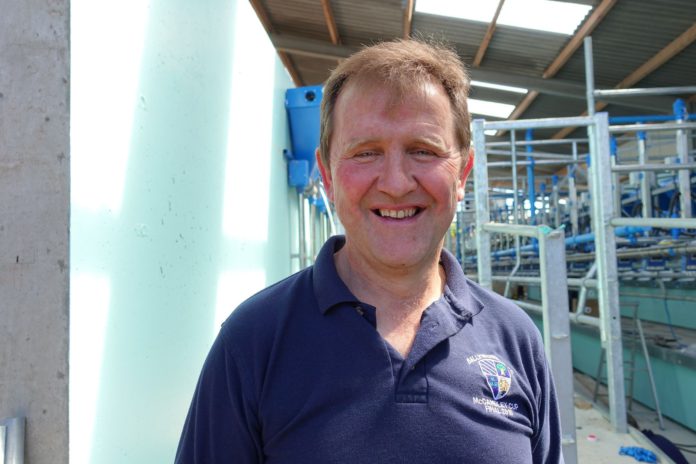 The next episode of UTV’s Rare Breed – A Farming Year features five farming families. The programme continues on UTV tonight (Thursday, January 30th) at 8.30pm and April’s a busy time for the families.

Wallace Gregg, a third-generation farmer, based near Cloughmills, runs a herd comprising of 160 Holstein cows. He has four young children who all get involved in the farm and who look after their own animals too.

Wallace comments, “It’s nice to see the kids helping.” He talks of his love of farming, “You don’t go into farming unless you love to do it because of the long hours….it can be lonely but it’s a way of life.”

He is preparing for big changes this year. After a long wait, he’s finally got permission to build a new parlour. It’s an exciting development but a critical one if the farm is to thrive for future generations.

Valentine and Chris Hodges are checking on their bees at Greyabbey.   It’s a key time to open the hives and inspect the colonies. They need to do this every seven-days to ensure the bees stay active and bright.

Chris picks out a drone bee, which don’t have stings and are much bigger, and explains the vital role they play in the upkeep of the hive.

He’s happy that the bees have wintered well and loves this time of year when he starts operating with the bees more regularly.

We then head to the Belfast Hills where Mark McConnell and his dad Phillip have an anxious wait for the result of a TB test.   They sold a cow that ended up in a herd with TB, so their farm was closed as a result. Vet, Cahir McAuley, who has appeared himself previously on Rare Breed, is overseeing the testing.

Meanwhile, near the iconic Dark Hedges in Co. Antrim, contractors the Lyons Brothers have a ploughing job. They employ European and World Champion ploughman, Thomas Cochrane, to do the work. He speaks with pride about not only his competition achievements but equally about doing a good job as a contractor.

He loves straight lines in a field, and laughs, “This is a new tractor and it has no GPS yet; my eyes are the GPS!”

Finally, Ballyclare vet, Diane Beattie is working a routine morning pet clinic but that soon all changes when an emergency arises. A ewe is lambing, and requires a C-Section. She remarks, “That’s the unpredictability of being a vet, having to switch from one thing to the next.”