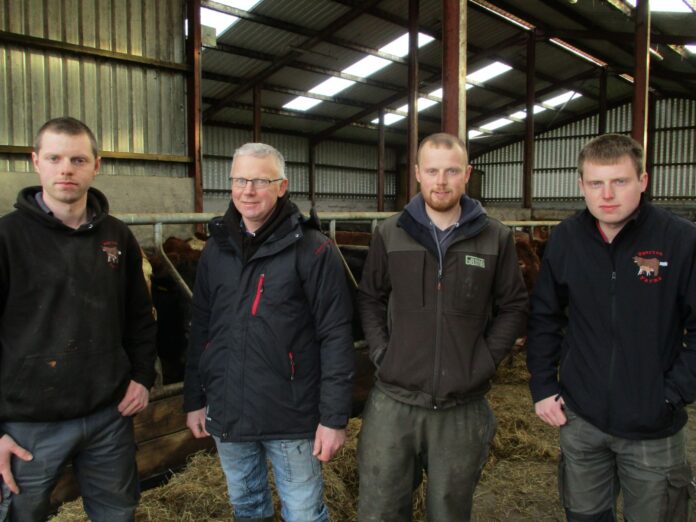 The hugely popular and successful RARE BREED – A Farming Year series returns to our screens next week.

On Thursday, January 19th, at 8.30 pm, it is all change again with new families, new farms and businesses, and new challenges, with some familiar faces thrown in.

Now in its eleventh year, this series follows 12 families as they deal with one of the most unpredictable periods in living memory.

For more than ten years, the series has taken viewers into the farming world through the lives of farmers across the country.

Be it traditional beef, sheep, dairy, and produce enterprises, or social farming, breeding alpacas and sport horses, we see how they face daily challenges and constantly work in all weathers against a backdrop of Brexit, climate change and the War in Ukraine.

In the first episode, we meet six families. First, we are off to Rosslea in Fermanagh, where award-winning farmer, John Egerton farms with his three sons, William, Robert, and Samuel.

The family have a suckler beef herd of 90 cattle and a flock of 250 ewes. In January, John and his sons are looking forward to the arrival of new calves to the farm.

John says all three boys are “mad about farming”, so he had to push the farm to make it a sustainable venture for the future for the whole family.

Near Limavady, we meet Richard and Leona Kane, who have a 750-acre arable farm on which they grow a range of crops, including wheat, barley, and oilseed rape.

They also produce carrots, and in January, Richard is busy lifting them – he has learnt that “it is a really tricky game to get a nice carrot”.

Despite the challenges, harvesting carrots is still one of his favourite jobs.

We are also off to Streamvale Farm on the outskirts of Belfast, where Tim Morrow runs a dairy herd of more than 200 cattle.

In January, Tim is preparing for their busiest time of year- calving season.

Streamvale is one of the longest-running Open Farms – it has been welcoming the public since 1989.

It is very much a family enterprise, and later in the series, we meet an in-law to the Morrow family, Chris Wilson, who runs the open farm business.

Our next stop is in Armagh, where William Gilpin manages the family vegetable business.

The family have been growing vegetables for 50 years, and William remarks the business has continued “to grow depending on what the opportunity is and what the market needs.”

The family supply supermarkets across the country.

In January, they are busy harvesting savoy cabbages, some of which will be making their way to Spain.

It takes teamwork to get the job done, and William is joined by his cousin Richard who oversees the fieldwork.

Joining the line-up at Churchview Farm in Katesbridge, Co. Down is a former Rare Breed participant, Geoffrey Ringland, who produces and rears award-winning goats.

In January, it is all about the day-to-day routine on the farm as Geoffrey feeds and keeps an eye on his livestock.

Next door in Dromara in Co. Down, Michelle Dunniece keeps a more unusual herd of animals – alpacas.

Michelle has been running Mourne Alpacas for 16 years with her husband, Stephen, and their four children.

Originally from Chile and Peru, alpacas are used to a different climate than Northern Ireland.

However, Michelle notes that their farm at the foot of Slieve Croob offers “five-star pastures”.

In January, Michelle and Stephen are making sure their herd is topped up with vitamins, especially through the darker winter months.

- Advertisement -
Previous article
VIDEO: Everything you need to know about colostrum
Next article
6 key aspects of calf accommodation