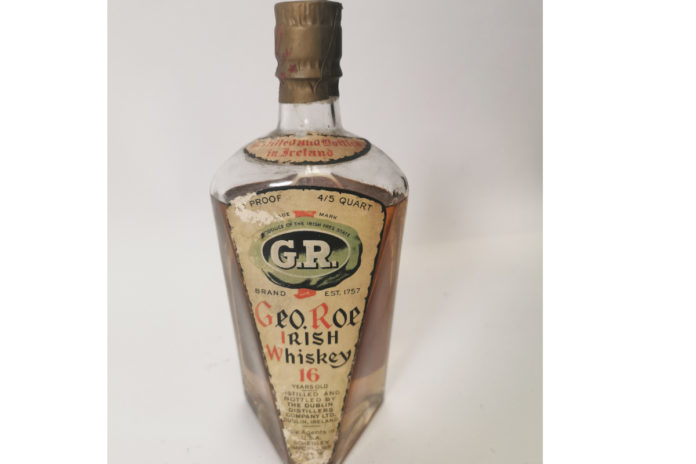 Rare bottle of Irish whiskey expected to sell for up to €12,000 at auction

A rare bottle of George Roe Irish Whiskey is estimated to sell between €6,000 to €12,000 in an online auction next week.

The George Roe brand was over 170-years-old when its Thomas Street Distillery closed in 1923. Allegedly, it took a few years before everything was bottled and sold and this 16-year-old release of George Roe seems to have been produced for export to the USA in the 1930s.

The label proclaims this to be pot still malt whiskey, making this an “incredibly rare” Irish single malt distilled before 1923 at a distillery that has been closed for nearly a century.

The one-day sale is due to take place at 2pm on Wednesday, August 12th.

Victor Mee Auctions has moved their sales online, having recently completed their second successful online-only sale since the pandemic struck.

In addition to the George Roe, Victor Mee Auctions will also welcome a 1950s bottle of John Jameson Extra Quality Dublin Whiskey to the auction block as well as a rare 19th-century copper whiskey still, with both items estimated to sell up to €1,200.

Amongst the array of advertising pieces due to go to auction, are several lots of motoring memorabilia “sure to invoke a wave of nostalgia” for many who grew up in close proximity to the local petrol station or mechanic’s garage.

Lots of motoring memorabilia included in the sale include an original Duckhams 20 – 50 barometer advertisement, an original Shell Motor Spirit Advertising mirror and a rare 1940s milk glass Shell petrol pump globe, the latter estimated to sell for between €400 and €800.

The upcoming sale is offering bidders a wide range of highly sought-after advertising pieces in the forms of figurines, mirrors, enamel signs and decorative structures.

A stand-out lot in the upcoming sale is lot 348, Presse’s Nunns Island Galway Whiskey advertising mirror. This mirror is one of the rarest Victor has ever come across and is estimated to sell at auction for a significant sum of €6,000 to €12,000.

The T.P. & R. Goodbody cigarette cabinet is one of few known still to be on the market in such pristine condition.

This Irish advertising cabinet has been estimated to sell at auction between €3,000 and €4,000.

Another piece that the Victor Mee team is proud to bring to auction is an extremely rare J Vint & Son Ltd Old Irish Whiskey glass advertisement.

“Estimated to sell up to €3,000, this unbelievably rare item has yet to be seen on the market and is guaranteed to be a crowd favourite. “

A nod to Irish football heritage

The sale will offer Irish football and hurling lovers and collectors, of which there are many, the chance to bid on three exceptionally unique advertising figurines, set to sell between €200 to €450 each at auction.

The figurines include rare ‘Please on All Grounds’ Kerry and Galway footballers and a Hurling Player.

Commenting on the Irish Pub Memorabilia & Collectibles sale as a whole, auctioneer Victor Mee said, “We believe that this sale really does have something for everyone and because of this we expect a lot of interest and a lot of bids come sale day.”

“Whether you’re in the market for a fine whiskey, something to add to a sporting collection or a one-off advertising mirror, you are sure to find what you’re looking for in our sale.”