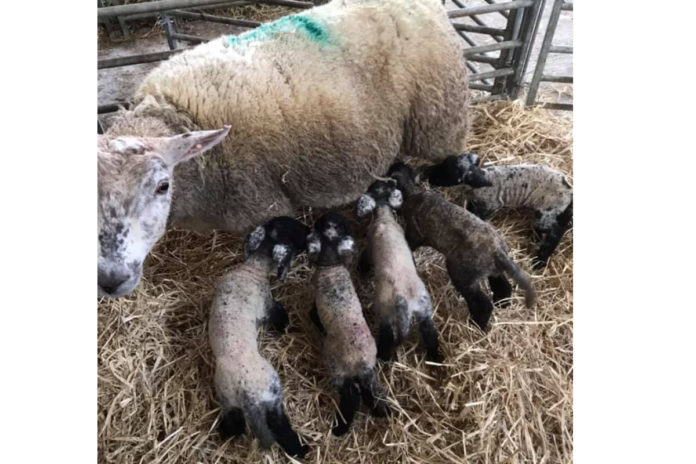 The ewe, which is the Donegal-based flock’s most prolific ewe, lambed triplets in 2018 and 2019 and had quintuplets earlier this week.

Speaking to That’s Farming, the agricultural consultant said: “The ewe was scanned for four lambs initially, so the fifth one was an added bonus.”

The quintuplets, which were born on Monday, April 6th consist of two ewe lambs and one ram lamb. The flock consists of predominantly Suffolk-cross-Texel ewes and had a scan rate of 2.08.

“The ewe was fed along with the triplet ewes pre-lambing and was receiving just over 1kg of Smyths Supreme ewe blend per day in split feeds with ad-lib silage which tested at 71 DMD.”

The quintuplets have brought great excitement but are not something he puts down to management, just a “lucky strike”.

Eoin is, however, a firm believer in monitoring trace element levels in the flock through blood sampling of the ewes and supplementing where necessary as selenium and copper are below satisfactory levels.

He said performance on the farm improved substantially when these deficiencies were addressed eight years ago.

As an agricultural consultant, Eoin said he fortunate to be working with some of the best sheep flocks in the country.

“Many flocks have seen a considerable rise in their scanning percentages this year due to the favourable conditions during the autumn of 2019.”

He has witnessed noticeable increases, particularly in the hill flocks, with significantly more twins scanned than in previous years.

“The Knowledge Transfer programme was hugely successful for many sheep farmers as it gave farmers the opportunity to see what worked on farms at local-level.”

“Farmers could benchmark their performances in grassland management and breeding. Hopefully, we can see the return of these programmes in the not too distant future,” he concluded.