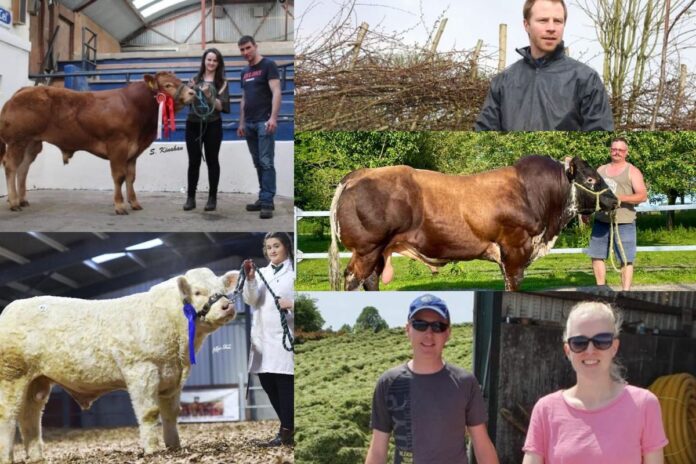 5 of our most popular suckler farmers in 2022

That’s Farming previews five of our most popular suckler farmers in 2022.

Katie Corridan hails from a large pedigree Limousin herd, about 200 cattle, with 100 breeding cows on 205-acres divided across two farms.

“Dad always kept some commercial sucklers, and since he married my mother, Doreen, they started breeding pedigree cattle.”

“Initially, this was a combination of both Charolais and Limousin, but in recent times, purely Limousin, and slowly, the herd became fully pedigree over time.”

“I regularly go to Europe with mam on the hunt for new genetics. Sometimes the most difficult part is how to explain to my commercially-minded dad that a 10-year-old cow was worth the price of 10 suckler weanlings.”

The family invested in further females from Cottage Charolais and at other dispersal sales.

She told freelance writer, Conor Halpin: “Farming has been a family tradition of breeding pedigree Charolais cattle since my father was younger.”

“My father tries to keep all of us happy. I am into Charolais cattle; my sister is into Belgian Blues, and my brother is interested in breeding Limousin cattle and has a small flock of pedigree Charollais sheep.”

“Moreover, I am completing my Leaving Certificate this year. I hope to study agricultural science at NUIG, have a career in agriculture and hopefully, someday, take over the farm.”

“Farming for free where there will be little or no cheques for inputs or contractors to be written”.

That, quite frankly, is Clive Bright’s ultimate goal on his 58ha suckler-beef farm in Ardsallagh, Ballymote, Co Sligo.

He believes that holistic planned grazing on a year-round basis is “key” to helping him achieve this objective.

He takes all progeny through to slaughter and sells beef directly to consumers under his own beef brand, Rare Ruminare.

The accomplished artist began farming in 2003 when his mother retired and converted to organics after a ten-year stint.

He felt that “synthetic fertiliser was not doing his soil any good, and the farm was struggling to return a profit”.

His mission statement is to “leisurely, profitably and perpetually farm an aesthetic landscape, to feed the minds and bellies of ourselves and others”.

He farms approximately 40 livestock units – including 15 suckler cows on a high clay content soil – across 58 ha, 15ha of which he rents.

Conor is a full-time secondary-school teacher, the owner of a music school and suckler farmer managing a 46-strong suckler herd across 90-acres.

The secondary-school teacher has taken responsibility for managing his grandfather’s (92) farm in Portarlington.

He is a third-generation suckler farmer who hails from Cooley, Portarlington.

The Mitchell family relocated to Cooley 60 years ago. The transition from Athy to Cooley was provoked by the tragic loss on the farm of Conor’s great-uncle.

In recent years, Conor’s grandfather had left the farm to his uncle, and with other commitments, he then took full responsibility for the farm.

He told freelance writer, Alicia Temple: “My farming career initially started with hens and then we went on to produce 100 turkeys for Christmas.”

He sells beef direct to consumers through his farm shop and for him, “it is a case of the heavier, the better” when it comes to carcass weights.

He told our resident editor, Catherina Cunnane: “We keep all heifers as replacements and sell better quality bulls for breeding. Then we fatten or sell secondary bulls up to 500-550 kg carcass weight.”

“Furthermore, we fatten cows for slaughter after two or three calvings. They weigh around 500/600kgs, and the good-producing cows stay on longer.”

“Most cows calf once a year. If they are not in-calf in the autumn, we fatten them for slaughter during the winter months. However, if this happens with one or two of our better breeding cows, which are not in-calf, we start AI’ing in February.”

“Keeping your cattle up and feeding, keeping your fences up, keeping costs low, and keeping your spirit and breeding passion up are among the key elements of running a successful suckling enterprise.”