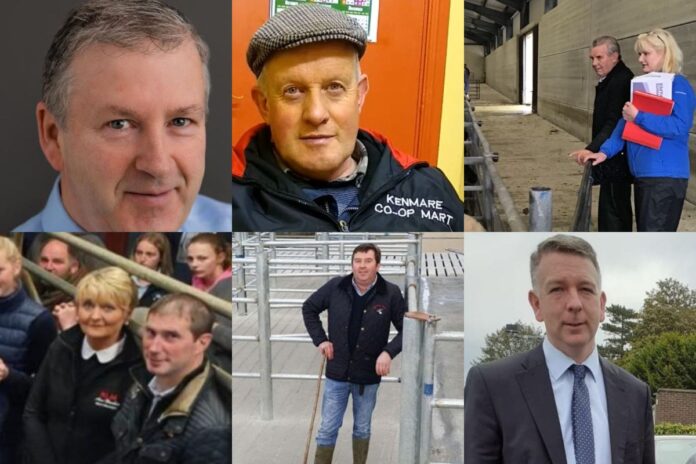 6 of our most popular mart managers

In this article, That’s Farming previews 6 of the all-time most popular mart managers that we profiled as part of our Mart Focus series.

Maurice Brosnan (49), born in Tullig, Castleisland, County Kerry, took over the management and ownership of Gortatlea Mart in January 2014 from his late uncle, Sean, aged 76-years-old.

Maurice left school at seventeen years of age to work for the late Jack McAuliffe as a pig farm manager in 1986 for nine years, looking after a 100-cow dairy herd and a 250-sow unit.

“I tried to take Fridays off to work with my uncle Sean at Gortatlea Mart; Jack always encouraged me to buy my own cattle. He also had a big dairy herd the year my father died, and he purchased all the in-calf heifers my father had ready for sale,” Maurice Brosnan told That’s Farming.

“After the untimely death of my father, I became more involved with farming and the cattle business. My late father and uncle Sean were well-known in the cattle trade and worked together as the Brosnan Brothers.”

In 1996, Kenmare Co-operative Mart opened through a visibility study led by Stephen O’ Brien and a development group. The mart serves a 30-mile-radius catchment area of The Bear Peninsula and south Kerry.

“I am farming all my life; my family have been living in Kenmare for generations. There was just not any education or qualifications for it then,” McCarthy told That’s Farming.

“I left school when I was 16, did the Inter Cert and did not come out with honours in any subjects; I got into it with pure hard graft and kept working at it. To note, I was secretary and chairman before that, and one of the committee members asked me would I take on the role as no one else was interested at the time.”

John Tevlin, from Co. Meath, runs a beef enterprise with his sons, Philip, and Patrick, in the small village of Carnaross. His wife, Olivia, is a financial advisor and auctioneer with Rogers Tevlin Auctioneers.

John is in his fifth year as manager at Ballyjamesduff Co-operative Mart. Previously, he managed Carnaross Mart, having worked there for twenty-five years.

He told us: “I come from a farming family and live close to the local mart where I have worked from when I was at school.”

“I took over the family farm at a young age as my late father was in poor health. I was farming and working part-time in local marts; it developed from there.”

The Coolfadda, Ballymote native, took over the general manager position from Martin Walsh, who filled these shoes for over four decades.

“The Aurivo Co-operative own four livestock marts. Balla Mart is the big mart with a Saturday sale and three rings in operation. In addition, there are three smaller marts, namely Ballymote, Mohill, and Ballinrobe.”

She previously worked as an accounting technician role for two different agricultural contractors, followed by a farm seed business for seven years.

“I have had no bad experience with gender stereotyping. I had worked in the mart for 14 years before the role, which made the transition more acceptable.”

To feature as part of our Mart Focus series, email – [email protected]