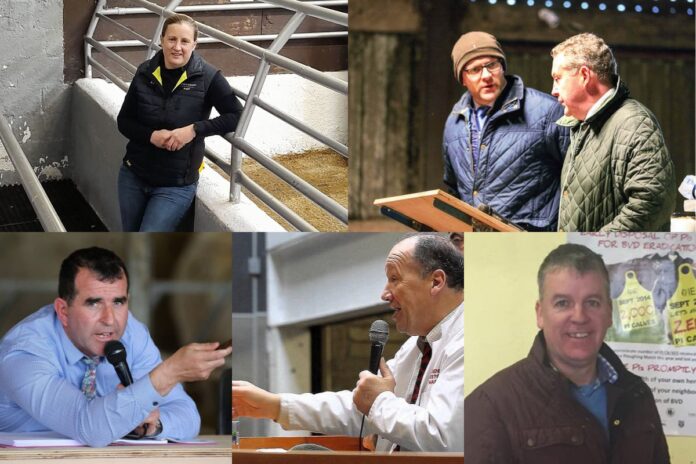 5 of our most popular livestock auctioneers

In this article, That’s Farming takes a look at some of our most popular articles as part of our On the Rostrum series.

Pat Burke, County Galway, is a livestock and property auctioneer and a Department of Agriculture, Food, and the Marine independent valuer.

The Caherlistrane native farms a 30-cow and a 40-strong flock across 80-acres of owned and land. He is married with three children who support him and help on the mixed farm.

“My father was a farmer, but I was only ten years old when he passed away. So, I used to go to the mart with my uncle. I would always be watching the carry on around the mart, which intrigued me seeing people buying and selling,” Pat Burke told That’s Farming.

“So, I left school when I was 16; I was lucky I got the break. It is not as simple nowadays for anybody thinking about going auctioneering or any walk of life. You have to get a good education, and if you are willing to work, you will have every chance in the world.”

In this article, he tells us about his 27-year career as a property and livestock auctioneer.

Eamonn Gaffney, from County Cavan, is a licenced property and livestock auctioneer, dairy farmer, and chairman of Cornafean GAA, having played senior football for twenty years.

The Cornafean native is a full-time employee at Progressive Genetics, working in the northeast and midlands servicing over 800 DIY AI flasks every three months.

In 1995, Eamonn enrolled in Ballyhaise Agricultural College where he obtained a Level 5 Green Cert.

The business resulted from the Dunleer, Louth native’s realisation, while on a J1USA visa in Boston, that auctioneering would enable him to be involved in the dairy industry.

“I knew that I could not be a dairy farmer, but I figured that being a dairy auctioneer would keep me involved in the whole dairying side of things,” Michael Taaffe, a Multyfarnham Agricultural College and UCD general agriculture graduate, told That’s Farming.

Michael travelled to the UK before establishing his business and spent two years at Wright-Manley, selling small implements before branching into livestock.

Lisa Keenan is one of the only, if not the only female livestock auctioneers in the country.

She also holds the weighty title of mart manager at Kingscourt Mart in County Cavan.

Originally hailing from Kilbeg, Kells, County Meath, where the family still have a suckler farm, she developed an interest in auctioneering from a very young age.

And this passion was nurtured by her late father, Jim Keenan, with whom she had a very close relationship.

Her father bought Kingscourt Mart, and it grew in popularity and numbers as the years went by.

Read about Lisa’s journey so far.

George Candler, from Ballintubber, County Roscommon, grew up on a 100-acre farm.

His mart involvement began through his dad being founding chairperson of Roscommon Mart, who held the position from 1959 to 1986.