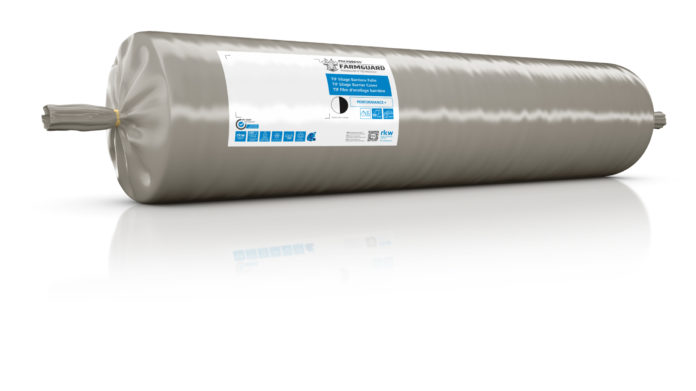 According to the company, the film offers a “significantly improved” oxygen barrier to protect silage and easier handling.

There is “no longer a need for vacuum film”, saving farmers time, effort, and material and reducing waste.

The company claims its 100 µm Polydress® FarmGuard silage barrier film is up to 100 times more effective as an oxygen barrier than standard silage films.

Moreover, it is easy to handle due to its extreme strength, as the dart drop test demonstrates.

“With this new product, we are giving our customers a seven-layer silage film that unites outstanding practical benefits with high-tech to create a truly sustainable solution for the future.”

“The excellent barrier function prevents oxygen from penetrating into the forage, ensuring the quality of the silage remains at the highest possible level for a long time. It also promotes the fermentation process.”

“Farmers benefit most from Polydress® FarmGuard when they need to store silage over longer periods.”

Maximum protection against oxygen means that:

Initially, RKW is offering Polydress® FarmGuard in widths from 8 to 16 meters / 32ft up to 50ft.

Other silage films, such as Polydress® SiloPro and Bunker Cover, will also be available from the autumn in widths of up to 39 meters / 127ft.

“We at RKW take sustainability seriously. We are committed to the responsible use of plastics, particularly in the agricultural sector.”

Among other things, this includes optimised processes in development and production that lead to less waste.

In addition, the special composition of Polydress® FarmGuard, with the EVOH oxygen barrier, does away with any need for additional vacuum underlay films for covering the silo.

This means farmers can make “multiple” savings through:

The high-quality recycled materials can be recovered to make garden furniture or other agricultural films.

- Advertisement -
Previous article
Post-auction report: €630,000 for 40-acre holding with farmyard
Next article
Electricians the most professional and expensive tradespeople – survey