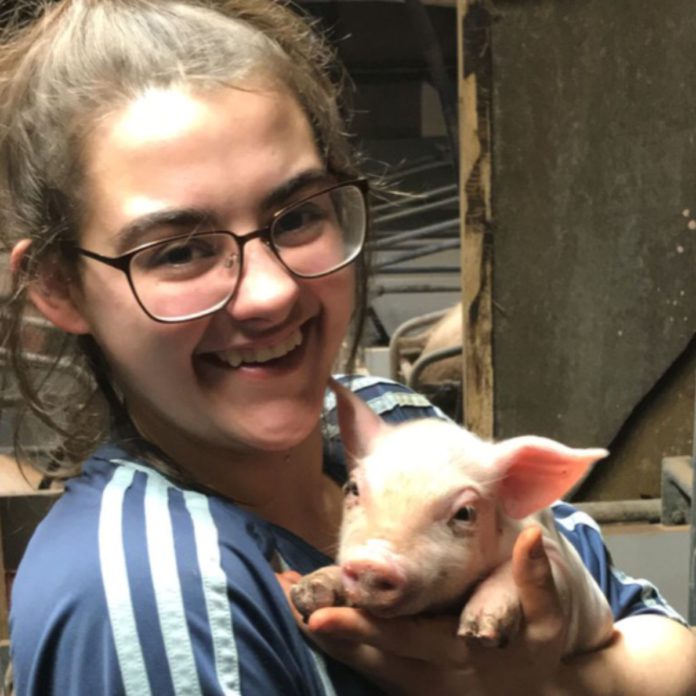 How this 20-year-old ‘townie’ became a farmer

In this week’s Women in Ag segment, That’s Farming, speaks to Amy Barry, who reveals how placement on a pig farm during her second-level studies shaped her future.

Amy Barry, who was not born into a farm family, is proof that it is possible to carve a career in agriculture by following an alternative route.

The Mallow, Co. Cork native openly admits that she “never expected to be farming”, but life took an unexpected turn during her teenage years.

The 20-year-old believes that she “probably would not be where I am today” without the assistance and guidance of her brother, who helped her secure her first job in the agricultural sector.

“My brother, Denis, was working on a pig farm and offered to ask his boss if I could work there. I started work experience on the farm in January 2018 as part of school.”

“I always wanted to do something with animals when I was younger but never considered farming. Then when my father got sick, I started to take care of him. I then took a view to care for the elderly as a career.

“I started farming just before my 18th birthday, so I was young enough, to be honest. Before placement on this farm, I had only been on open farms throughout Cork, including Kennedy’s Farm and Leahy’s Open Farm. When I started farming, I realised I want to stick with it, so I have been on the pig farm ever since.” 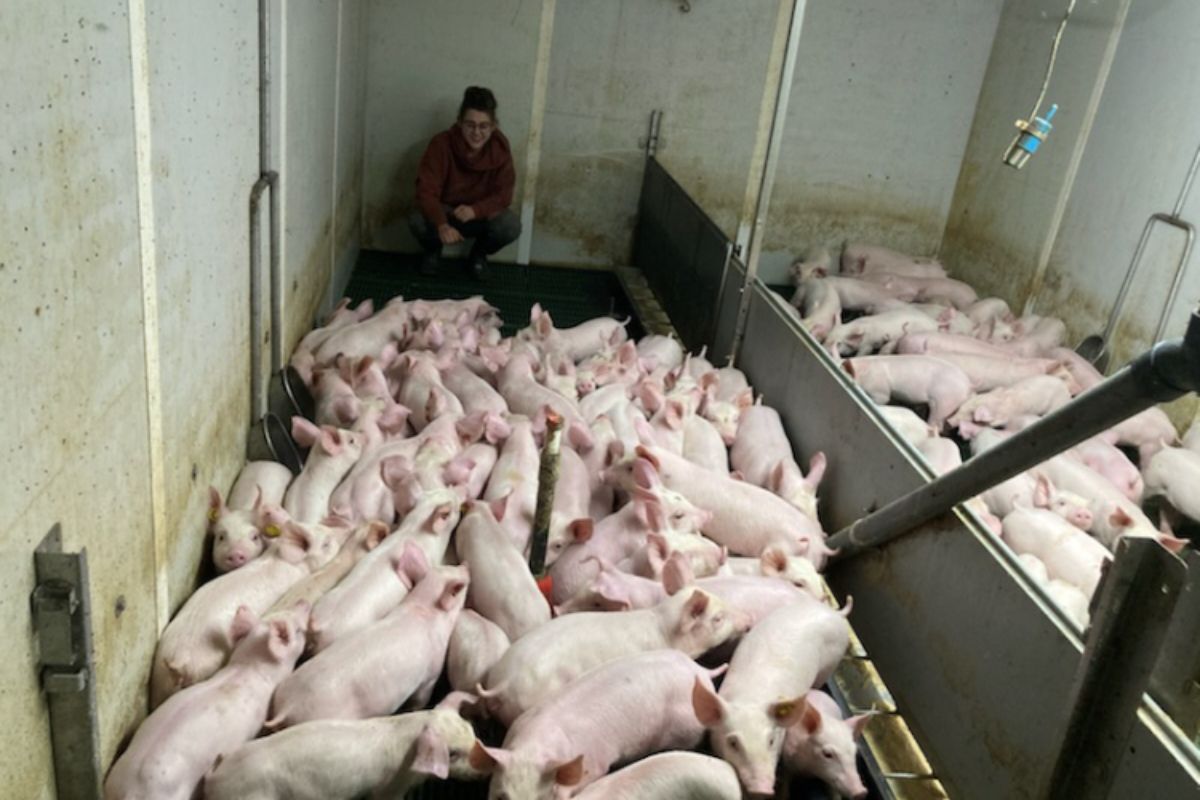 The piggery is an integrated unit with high biosecurity measures that farrows sows weekly and keeps piglets here for 26 days before weaning on Thursdays every week.

“They go into the grower house where we keep them at a temperature of 30 degrees and feed them liquid feed to avoid stress. We keep them in there for four-to-five weeks before moving into the next stage at 23 degrees for six weeks. Finally, we move them to the fattening stage for 12 weeks and sell them.”

“Sows farrow about 2-3 times every year, and all animals are fed wet feed through a computer-automated feeding system. This system is very accurate for measuring feed intake and, thus, is easy to measure growth rates at every stage, which is very important in pig production.”

“Pig production is very high input and can be very low in returns at times, so one must know the cost of production. My favourite thing about farming is spending my time caring for bonhams, watching each of them grow and forming a friendship, somewhat, with them. Not one day is boring, as every day is never the same.” 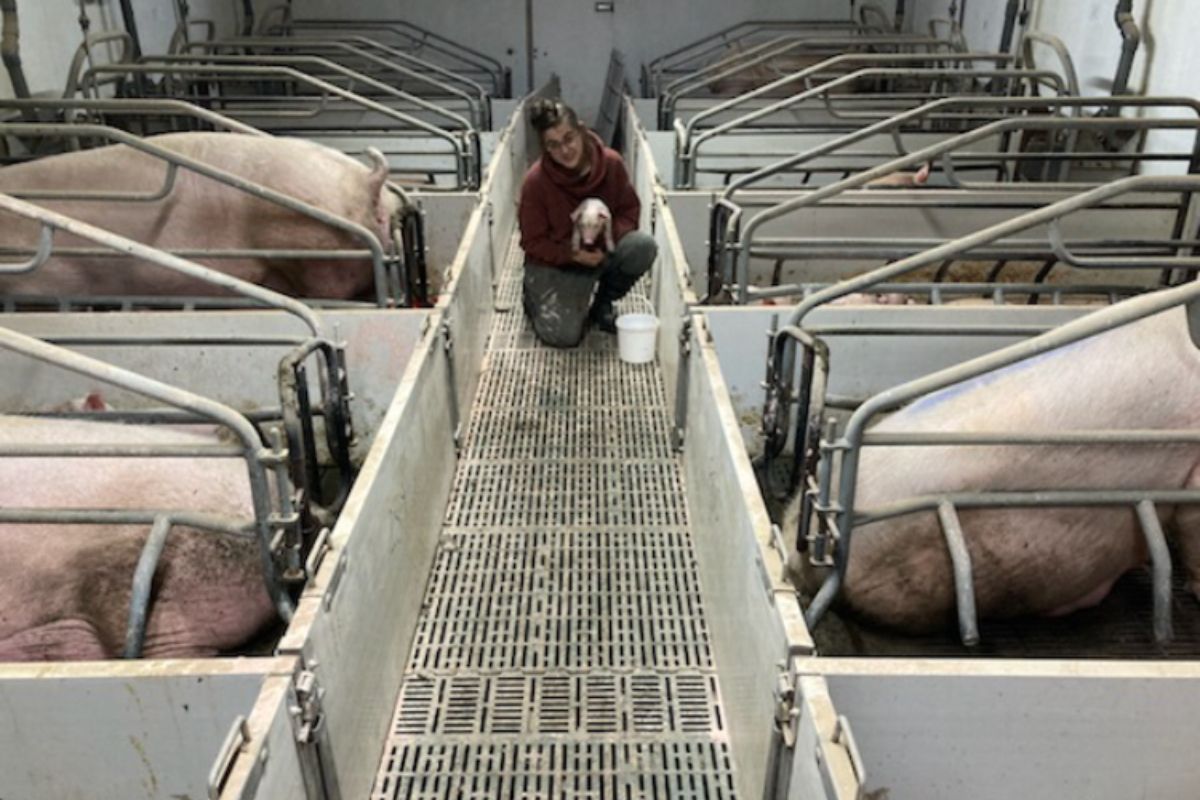 Having identified her new-found passion, Amy liaises with her brother, Denis, and farm-owner, Tom, daily as part of her work at the Dromahane-based piggery.

Denis has taught her about the practical side of agriculture, while Tom has provided her with knowledge of animal health, welfare, nutrition, and data recording.

“I consult with my brother on a day-to-day basis to complete tasks and to prepare for the next day. If I need help with anything that I do not understand, he is there to help me out every time.”

“He has taught me about AI and everything associated with the process of breeding, including gilts’ heats, along with moving sows and handling bonhams.”

Amy has gained invaluable farm experience over the past three years and is being handed increased job responsibilities as time progresses.

When the farm first employed her, she worked one day per week and secured a four-day-a-week position after finishing her second-level studies.

“I do not have a specific title as such as there are three of us on the farm. However, I am more to the side of caring for new-borns and preparing them to be moved to the next stage of their life on the farm.”

“It did not take me long to adapt to animals, but it took a week or two to adapt to the different jobs I had to do with animals.”

Looking ahead, Amy intends to further her studies by completing an agricultural-related course in the future to solidify her opportunities in the sector.

She has a burning desire to continue her work in this line, with a view to climbing up the career ladder and possibly branching into nutrition.

“I would rather continue to work as an employee on a farm as opposed to owning one myself. Life as a woman in agriculture has its ups and downs, but, all in all, I love my job and all the experience that comes with being a farmer. I love doing what I am doing each and every day I am on the farm.” Amy concluded.