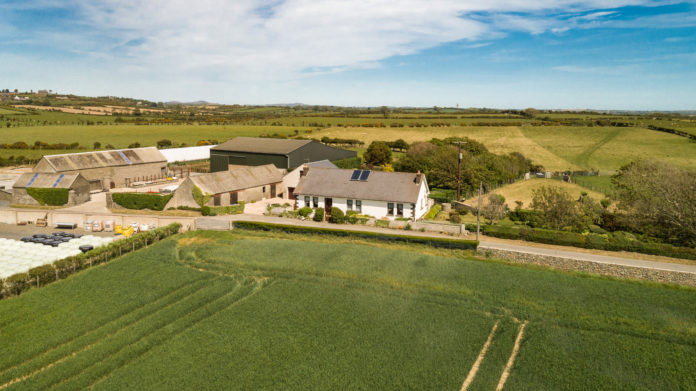 PHOTOS: Over €1.6 million sought for mixed able and livestock farm

The selling agent, Savills, has said the property in Rossglas, Downpatrick, has a “spectacular coastal position with exceptional views” over the surrounding County Down landscape, in particular, towards the Mourne Mountains.

“The area has a reputation for productive, high-quality farmland at low altitude and has a well-developed agricultural infrastructure, including several agricultural machinery merchants. It benefits from a mild, temperate climate.”

The farm includes a renovated farmhouse and an “immaculate range” of farm buildings.

Situated to the west of the farmyard and with separate access, is a site with foundations laid and planning permission to construct a dwelling house.

“The free-draining, productive farmland is in five separate holdings, with each block having the ability to grow arable crops and good swards of grass.”

There is “excellent” access to all blocks of land via public roads.

“A particular feature is the standard of fencing and hedgerows throughout the farm, with many double fenced.”

“The fields are generally of a good shape and size for modern agriculture and have a mains water supply, with the majority of the fields having drinking troughs.”

The current farming system includes an in-hand commercial flock of breeding ewes and a herd of suckler cows.

Arable crops are grown on the farm, including winter wheat and spring barley in 2020.

The farm is 2.5 miles to the west of the village of Killough which provides for everyday necessities and has a grocery store, chemist, primary school, and café.

It also conveniently lies a short distance from several towns including Ardglass (5 miles) and Downpatrick (7 miles) which offer a wider range of amenities.

The local area has a selection of “magnificent” beaches, including Rossglass, Tyrella and Newcastle.

The picturesque St John’s Point Lighthouse is 3 miles by road, with its surrounding waters famed for the sea trials carried out by the Titanic.