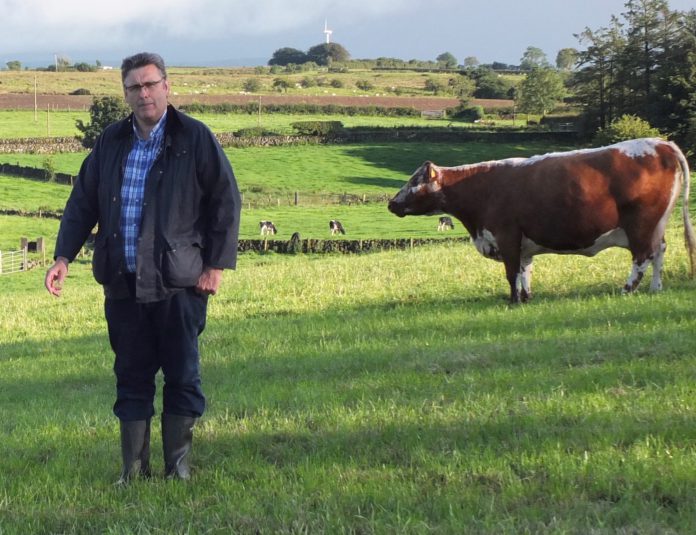 ‘People are going back to native breeds’

A breed society is gearing up to hold an online timed auction later this month.

The Irish Moiled Cattle Society’s sale of elite cattle will begin on Thursday, September 24th, 2020 at 12pm and will end 48 hours later, on Saturday, September 26th.

Harrison & Hetherington has been appointed to conduct the sale, which according to the society, has attracted 38 entries in total, from Great Britain, Northern Ireland, and the Republic of Ireland.

25 females and 12 males of “elite quality” will be sold to established herds and potential new breeders.

Brian O’Kane, chairman of the society, said: “This is an elite sale with some of the absolute best Irish Moiled cattle in the world.”

“We chose H&H because they are the best at what they do. We are confident that they have the knowledge, and with the breed experiencing a surge in demand, we wanted a company that would know how to handle the sale and support us in the most professional way.”

One of just a few surviving native breeds to the island of Ireland, the Irish Moiled is gaining attention from beyond Britain’s shores.

They are a hardy, medium size cattle, a dual-purpose breed reared for both milk and beef.

They also boast a long life which sees them calve well into their teens. This premium beef is notably in high demand for its marbling and fine flavour.

The Irish Moiled Cattle Society has been at the “forefront” in protecting the unique genetics of the breed and a certification scheme, which verifies the cattle as 100% Irish Mollied pure-bred, thus, includes DNA parent profiling.

“This assures sale confidence in buyers, wholesalers and bidders as all animals offered for sale will have full registration status or pending for young calves.”

“It is a niche market that is currently growing. People are going back to native breeds which are easy to look after, easier to calve and are milkier animals.”

“This is because the breed remains true to its native traits, and so has many big selling points such as being naturally polled and being a great mother.”

With the current emphasis on the environmental impact of farming, this breed can offer a “fantastic opportunity for environmentally conscious farmers to thrive in the industry”.

“It’s ability to out-winter and fatten on a grass-based system coupled with its highly marketable appearance makes it an attractive opportunity, happy bidding.”

In another first, last month saw Irish Moiled semen exported to New Zealand and Australia, which is, the society said, “further evidence of the expanding demand and of these unique genetics being sought-after all over the world”.

‘Consistently deliver firsts in our field’

“At H&H, we are proud of our ability to consistently deliver firsts in our field, whether it’s the first time bringing a full pedigree breed to public auction or it’s implementing new technological solutions to the industry.”

“As much as being there in person is a big part of the atmosphere and process of pedigree livestock trading, we’re actually able to reach more potential bidders with this format of a virtual sale.”

“We’ve worked really hard to make sure that we are offering the best possible platform to provide the breeders, society, vendors and auctioneers with the confidence to take part, and to achieve successful sales of the cattle.” Pritchard concluded.