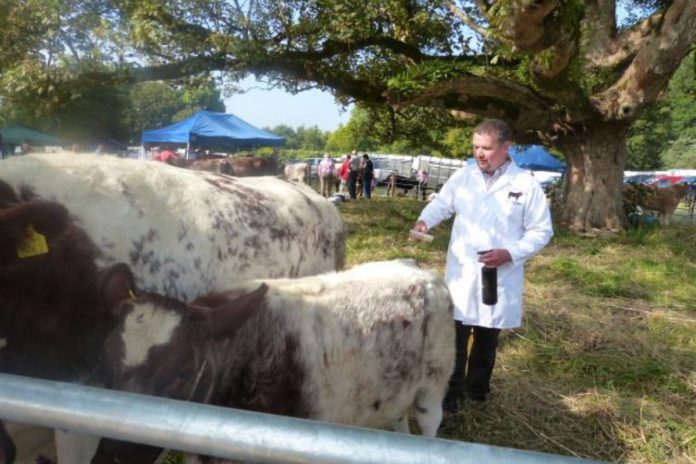 In this week’s Suckler Focus That’s Farming, speaks to cattle breeder, Jude Benson of Gavan Pedigree Herds and Rathmullen Angus. We discuss how he established his Shorthorn herd as a teenager,  24-month-old calving, sourcing semen overseas, and how he feels the demand for roan cattle is outstripping the supply.

The bloodlines of Jude Benson’s cattle on his 120-acre farm in County Sligo dates to 1945. This year, the third-generation farmer’s grandfather bought two pedigree Angus breeding females under the Rathmullen Angus prefix.

The Rathmullen Angus prefix is very much alive today, along with Gavan Pedigree Herds. It consists of 8 pedigree Angus cows, 18 pedigree Shorthorn breeding females plus their followers, and 40 Suffolk and Suffolk-cross-Texel breeding ewes.

“When my father started farming on his own, he had a few pedigree, Angus. So, it was probably split 50:50 between pedigree Angus and commercial Shorthorn cows which we mated both to the Shorthorn and Angus,” Jude Benson told That’s Farming.

Jude first got attached to the breed through the visual red, white, and roan colour. He believes there is a huge demand for roans, with the factor in his eyes “being the market supply being big enough”.

“When a cow goes calving out of a Shorthorn, one of the big things is going to be what colour the calf is going to come. So, it is another bonus when you get a lovely roan heifer.”

The next step in his journey brought him to Canada, flushing New Beginnings Elsies Jade and bringing home the resulting embryos. He also purchased from the Rose cow family, owned by the late Larry Lavin of Lacken, Strokestown, in County Roscommon.

“We were lucky enough to get two heifer calves from that flush. New Beginnings Elsies Jade formed the basis of that cow family, so we have many descendants from those two embryos.”

Jude believes Shorthorns have “so much to offer, quiet cattle, and a pleasure to deal with”. He focuses on commercial traits, and docility is paramount.

“I want to be able to go out the field and walk up to any animal. It does matter if it is a calf or a cow; docility is a huge thing. When labour is such a scarce commodity on farms, people need cattle that are quiet and easy to deal with.”

“So, if you have any job you need to do, and you need to do it on your own, there is no problem, you can do it. There is no banging of gates or animals trying to jump over a crush or anything.”

“Docility is a huge thing in cattle that is underrated, and it just makes life so much easier when you have cattle that are quiet.”

“The big thing about the Shorthorns is that they are a very maternal breed. They have great milking ability and cross so well with the commercial sector. You can cross them to any breed of bull, and they breed a great calf.” 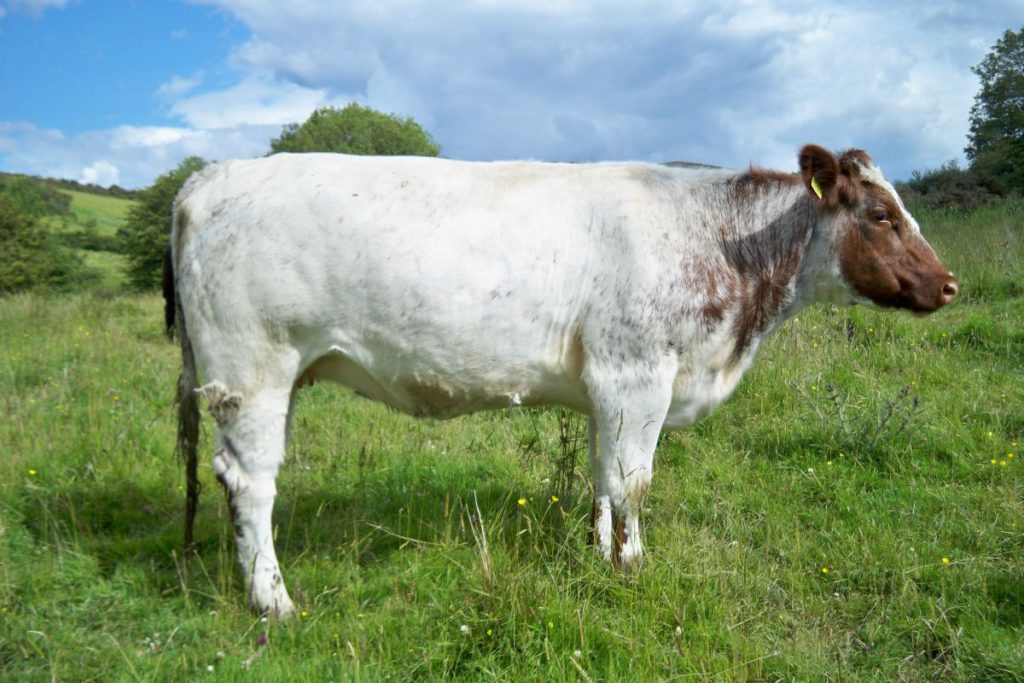 Jude’s ideal cow is medium-sized, easily fed, between 650-700kgs and good on her feet. He expressed that he does not pare any hooves and has not done so in over 16 years.

“When I am sourcing a bull to use, I deliberately source them from herds that focus on commercial traits.”

“They are pedigree herds in Canada and Australia, but they are very commercially orientated. They focus on easy calving, udder quality in the females, and good legs and feet.”

“I have used Sliabhbhui Prince again last year and again this year on selected females almost 20 years after he was born.”

“I believe if a bull is good, and he is timeless, you can keep going back to them and using them genetics again.”

Other semen imports that proved successful were from four bulls from the Alta Cedar herd and a Paintearth Rama bull.

In recent times, he sourced semen from an IBR negative Australian bull, Sprys Patents Ace, which sold for $46,000, which he spotted as a yearling.

“He is proving very successful for us as well. The cattle are very quiet, have tidy udders (the females) and make great cows.”

“I noticed this year in my calf crop some of the best calves are out of Painterface cows,” the pedigree breeder added.

Jude sold a Sprys Patents Ace, son, Gavan Summit, to the Gene Ireland Programme several years ago. He described this bull as having “a mix of maternal traits with very good permanent traits and well-muscled”.

Jude’s highlight so far has been the sale of this bull, which currently stands in James Muldowney’s yard in County Laois with his pedigree Shorthorn and commercial herd.

In May 2021, a Gavan Summit daughter Muldowney bred made €3,840 at the Irish Shorthorn Marketing Company’s Shorthorn-cross sale at Roscrea Mart.

“It was great to see James getting on so well with Summit’s progeny. He is breeding consistently for him, and he is delighted with what the bull is throwing for him.”

“They are progeny testing some of Gavan Summit’s progeny up in Tully Test Centre. The first heifer that was killed out a Salers dam graded a U.” 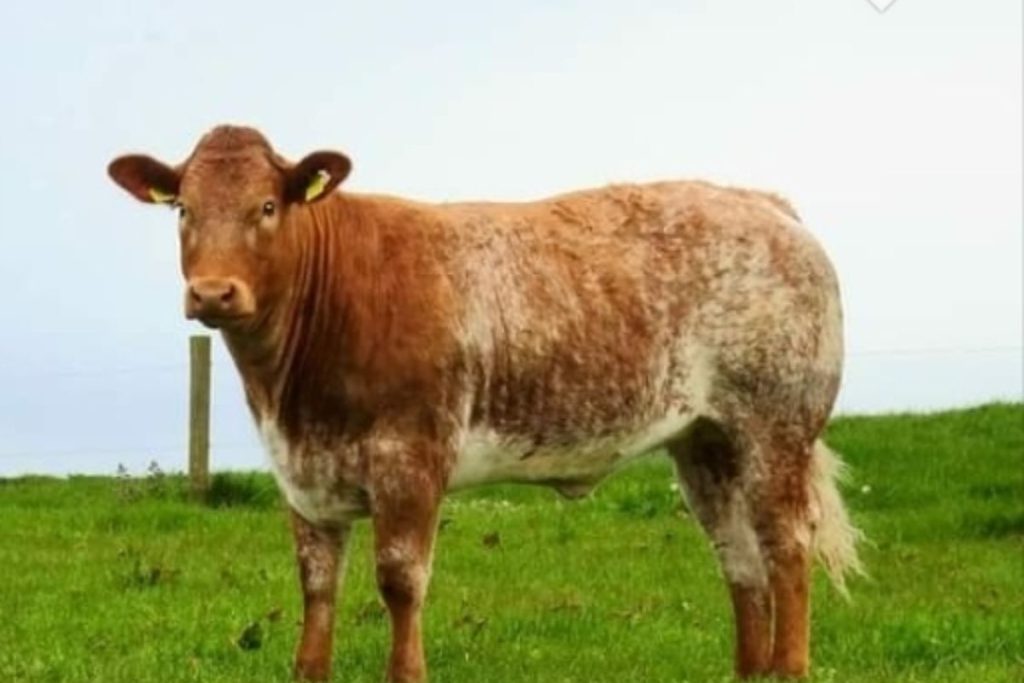 “The first daughters of Crooked Post Drover I have just inseminated to calve down at 2-year-old. I calve everything at 2-years-old because I think females should be able to calve at two, so you have a cow that has a longer and more productive life.”

“I do not see any sense in letting heifers calve down at three or three-and-a-half-years-old. You have lost a lot of time in their productive life when they could be having calves for you.”

Jude’s current stock bull on the farm is a DRS Super Mario son; a Canadian export alluded to earlier.

The suckler farmer noted that his breeding programme revolves around AI. However, he kept this 1-year-old bull for his females, crossing a red and white giving him a roan.

“There is level and depth of consistency. That is what is keeping me keener to use him as a stock bull as well.”

Jude finds that AI is a convenient option allowing him to access overseas genetics for very little cost.

“They could be a bull from Australia or Canada that sold for $46,000, and through AI, you can use that bull on your own small farm in the west of Ireland for €40.”

“AI allows you to match a sire to a cow. So, if you think a cow’s progeny could do with a little bit more size in the next generation, you could use a bull to do that or if you think you need more milk or some other little thing lacking.”

“The great thing about AI as well is you can select new genetics, which helps keep the bloodlines fresh and offers you something new.”

“I usually have bull calves that are the first sons born in Ireland of a particular bull. Therefore, there is no danger they would have that breeding at home.” 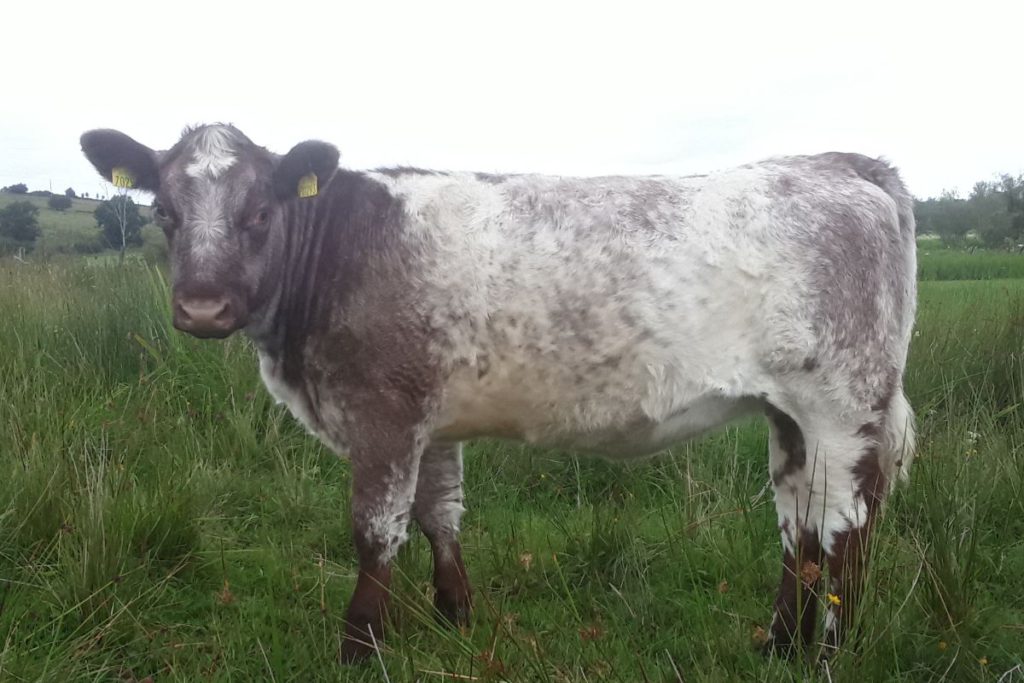 As part of the Irish Shorthorn Society’s Fastrack, breed improvement programme, 150 straws from Denmark will be coming over to Ireland from a bull called Jelzen.

According to Jude, Jelzen has over 1,000 calves on the ground in Denmark and will be available to all pedigree and commercial farmers in Ireland.

The Sligo breeder noted that the importation of straws and flushing on-site is of huge benefit. The other option available to him is bringing in a stock bull from abroad which requires an IBR negative status.

“The main reason I was attracted to him was that he was a proven bull. His daughters in production are outstanding cows,” the pedigree breeder added.

“Hopefully, he will continue those traits when he is crossed into the Irish gene pool. After that, it will be just offering something different and helping keep the bloodlines fresh and renewed.”

“I calve a few in the autumn. So, suppose they happen to have bull calves. In that case, you have a stronger, more advanced bull to sell to farmers seeking a bull looking to run with larger numbers of females in their first working season.”

The pedigree breeder sells most of his herd’s progeny through on-farm sales. Customers arrive in October and November, with bulls retained until they are between 12 to 14 months.

Pedigree sales are occasionally an option for him. However, he usually has customers making enquiries directly about purchasing stock from him, which is “very convenient”.

Jude will continue to focus on female maternal traits, breed character, and the polled gene [in his Shorthorns] the market requires. He added an adage, “the bulls will come through themselves”.

“I hope through the use of bulls from outside the country internationally to use fresh genetics from Canada and Australia especially. The genetics that will offer me what I go to in terms of my breeding goals.”

Furthermore, over the next five years, he will increase his Rathmullen Angus herd by five cows.

He has started the process by flushing a Deverall Elize Scottish cow (a 3-year-old prize-winner at the Royal Highland Show) to Youngdale Dudley, a Canadian straw due in September, ahead of the incoming embryo importation regulations.

He noted that the Shorthorn breed has experienced a resurgence of interest from commercial farmers, with the number of pedigree Shorthorn herds also on the rise.

“It is great that pedigree Shorthorn breeders are getting fantastic prices at home and pedigree sales for their cattle.”

“Hopefully, the more commercial farmers that use Shorthorn genetics, the more they will see what the breed can offer in every sense.”

“It is great that more people are waking up to all the positive attributes that the breed has.”

“A big event that is coming up in the Shorthorn world is Elphin Mart on September 11th, when the first-ever national Shorthorn show will be held.”

“We look forward to seeing all Shorthorn enthusiasts. Anybody with interest in the breed is welcome to turn up on the day. It should be a great day for everyone.”

Jude believes the focus in suckler farming should be on quality, and it does not matter “what breed or native or continental genetics.”

“At the end of the day, when you go out with your animal to sell, you get paid for weight, and you get paid for shape. As a bonus, if you have an animal that is eye-catching or has a nice colour or good coat of hair on it, it is like the icing on the cake.”

“Especially, for the suckler farmer, if you have cows in the herd that have fertility problems or bad feet, cull them out because they will breed them into their daughters.”

“Sometimes, it can be a hard decision to cull an animal out. A lot of farmers in Ireland are small farmers, but the more you cull for bad traits you will find, the better your herd will become, and the better quality each generation will get on your farm of stock,” the pedigree breeder concluded.

Are you a pedigree breeder? To share your story, email – [email protected]

- Advertisement -
Previous article
Supplies of finished cattle to be ‘tight’ for rest of 2021
Next article
‘Drivers of agricultural vehicles, including quads, are not exempt from road traffic legislation’