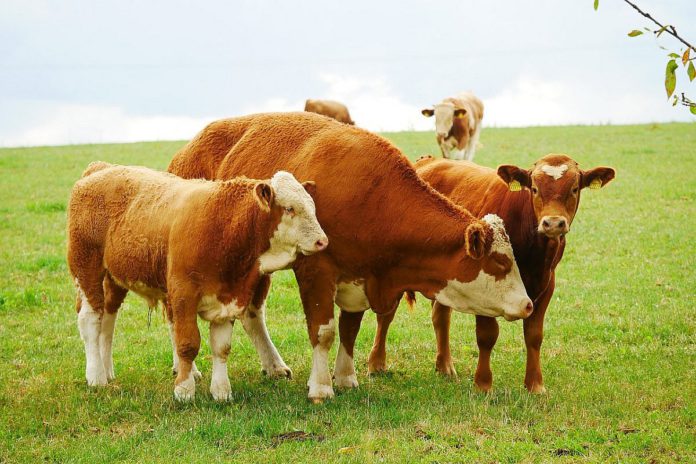 Over 1,700 southern cattle slaughtered in NI factories in July

Base quotes in plants across Northern Ireland ranged from 360-366p/kg for U-3 grade steers and heifers, according to the Livestock and Meat Commission (LMC).

It added that reports have indicated that higher prices are available.

Base quotes for O+3 grading cows were in the region of 270-290p/kg. “Similar quotes for all types of cattle are expected for early next week.”

Overall, cattle throughput in NI was nine per cent higher during July 2020 when compared to the same month last year with the volume of beef processed increasing by a similar margin to total 13,573 tonnes during July 2020.

Imports of cattle for direct slaughter from ROI last week included 378 prime cattle and 208 cows, which was similar to the previous week, the LMC added.

Prime cattle imports for direct slaughter from ROI during July 2019 totalled 1,757 head and accounted for 6.1 per cent of prime cattle throughput in local plants.

During July 2019, 1,330 prime cattle were imported for direct slaughter from ROI and accounted for 4.9 per cent of prime cattle throughput in NI processing plants.

The LMC outlined that the deadweight cattle trade has continued to improve in NI with the R3 steer price up by 1.7p/kg to 374p/kg while the R3 heifer price increased by 2.6p/kg to 375.6p/kg.

The young bull trade has also continued to improve with the R3 price up by 2p/kg to 366.6p/kg.

Reported prices for O grading cows, generally, improved in NI last week, however, prices for P grading cows came under some pressure which contributed to the 1.9p/kg decline in the average cow price to 269.9p/kg, the LMC explained.

There was a “strong improvement” in the deadweight cattle trade in GB last week with the average R3 steer price increasing by 6.7p/kg to 374.5p/kg.

R3 steer prices increased in all of the GB regions last week with the strongest increase recorded in the Midlands and Wales where R3 steer prices were up 8.9p/kg to 372.3p/kg.

The improvement in average R3 steer prices in GB last week has moved prices ahead of the NI trade, the LMC outlined, however, it is worth noting that the R3 steer price in NI last week was still the second highest reported price in the UK behind Scotland.

The cow trade “came under some pressure” in Scotland and Northern England last week, however, strong increases in reported prices in the Midlands and Southern England resulted in the average cow price in GB increasing by 1.9p/kg from the previous week.

- Advertisement -
Previous article
VIDEO: Taking over the farm at 18, doubling cow numbers and building a new parlour
Next article
Farmers who supplied cattle to Algeria advised to apply for €100/hd beef payment