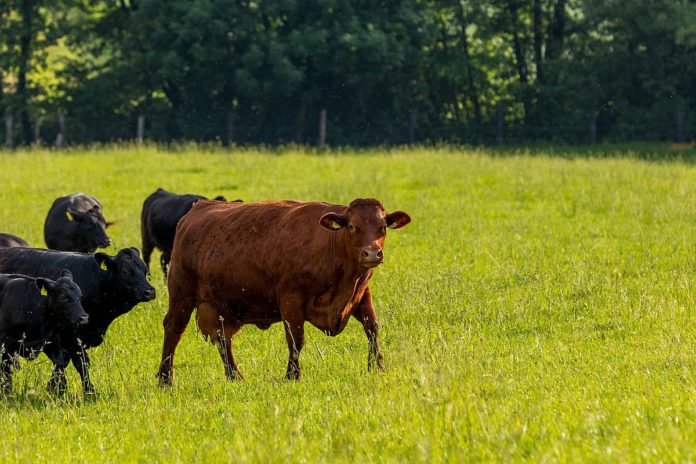 Base quotes for U-3 grading prime cattle held steady across plants in Northern Ireland this week, according to the Livestock and Meat Commission (LMC).

Such prices ranged from 354-364p/kg with the majority of plants quoting at “the upper end of this scale”.

“With such a range in base quotes, producers are encouraged to shop around to get the best possible deal for their cattle.”
The LMC reported that the cow trade has held steady with base quotes of 260-280p/kg for good quality O+3s.

“Some of the major processors have reported a slight improvement in cattle availability in the last few weeks with 6,406 prime cattle processed locally last week.”

This was down 321 head from the previous week, however, was just ahead of the 6,214 prime cattle processed in NI during the corresponding week last year.

Cow throughput has remained strong in NI with 2,324 head in this category processed last week; this was similar to previous weeks, however, well ahead of the 1,841 cows processed during the same week in 2019.

There were 425 prime cattle imported from ROI for processing in local plants last week, the lowest level of import recorded since the last week of May this year.

Imports of prime cattle have totalled 3,217 head during the last six weeks compared to 594 head in the same period in 2019, according to the LMC.

“A widening price differential between NI and ROI, combined with tighter domestic cattle supplies, have contributed to this increase in prime cattle imports for direct slaughter.”

There has also been a strong increase in cow imports for direct slaughter in local plants with 1,550 cows imported during the last six weeks due to stronger cow prices in NI.

Cow imports for direct slaughter were up from just 119 head during the corresponding period last year when cow prices in ROI were tracking ahead of NI prices.

The deadweight cattle trade has continued to improve in NI with the R3 steer price increasing by 3.6p/kg to 368p/kg. This is the tenth consecutive week in which the R3 steer price has increased and is the highest reported price in NI since June 2018, the LMC added.

The R3 heifer price in NI has followed a similar trend and increased by 3.1p/kg last week to 367.5p/kg.

The deadweight cow trade in NI has also continued to improve with the O3 cow price increasing last week by 3.3p/kg to 289.6p/kg. This placed it 35.6p/kg ahead of the equivalent price in ROI and 8.9p/kg above the average GB price for O3 cows.

“The deadweight cattle trade has come under some pressure in GB with many reported prices back from the previous week.”

The average R3 steer price in GB last week was up by 1.1p/kg to 368.1p/kg, however, this was driven by a strong increase in reported prices in Northern England while all other regions recorded a decline.

The R3 heifer price in GB last week was back 1.7p/kg to 367.6p/kg with declines in reported prices recorded in Scotland, Northern England, and the Midlands.