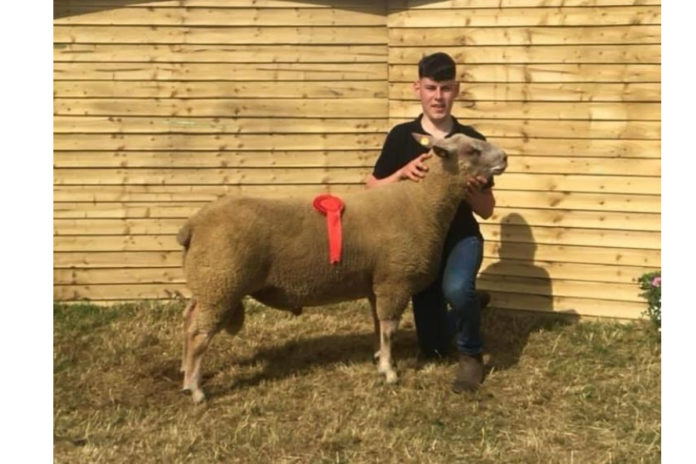 ‘Once we went with Charollais, we never looked back’

Farming in Laragh, Maynooth, Co. Kildare, Eugene O’Sullivan has grown a flock of top-quality Charollais sheep, having started back in 2012 with just a pet lamb.

Originally a suckler and commercial sheep enterprise, the young farmer has amassed a flock of 40 pedigree breeding ewes.

“I was given a pet lamb by a friend initially. Then we went and bought 5 or 6 pedigree ewes and bred off them. I decided then to invest in a stock ram and from there it has grown every year.”

“I never would have seen myself getting into pedigree breeding, but we said we would give it a try. We used to have around 100 Suffolk-cross ewes but once we went with the Charollais, we never looked back.”

Keeping within the society guidelines, which states lambing cannot commence prior to the 27th of December, O’Sullivan started lambing on 29th and the season carried on through the month of January.

His breeding and lambing strategies are both decided with the show season in mind. For the last number of years, he has competed with his pedigree Charollais’ in shows across the country.

Speaking on his success to date, Eugene told That’s Farming: “You win and some and you lose some. We’re not up to the champion standard yet but we’ve had a few 1sts and reserves.”

Lambs are weighed at birth and again at 40 days in order to identify the best ones for showing later in the year. When the rest of the sheep are being turned out in the spring, those chosen for shows are kept indoors and creep fed meal ad-lib.

Once weaned, they will be turned out at the end of March or the first week in April, Eugene explained.

Each year the Kildare native will enter his best ewe lambs and hogget ewes in the shows. The shows and sales are the main source of income on this farm for the sheep, as all of the lambs are sold privately.

“It’s all private sales because if you go to the mart you will only be getting factory prices. You would want to be getting more for your lambs because they eat more than they are worth in mart prices.”

“Last year, we were flying and demand was good. I don’t know what to do now without shows.”

Although sheep are his main interest, the farm is also home to a number of suckler cows. The cows are Simmental, Limousin and Aberdeen Angus breeds, all bred to a Limousin bull.

“This year we started calving in March and had the sheep lambed by the first week in February, so we had a bit of a break. The cows are dragging on a bit this year, but other than that it’s been good.”

As he expands his flock, the demands at lambing time will increase. Rather than sacrificing the cows completely to solve this problem, O’Sullivan has plans in mind for a change in system.

“When my father retires, I’ll probably start fattening heifers along with the pedigrees, but I wouldn’t go completely into sheep. I’ll probably stretch to 60 ewes but the main thing I plan to do is put up a few more sheds and improve the infrastructure.”

The 22-year-old has just finished his second year in Mountbellew Agricultural College and hopes to make big changes to his farm once he finishes his studies.

With a long future of farming ahead of him, Eugene has many plans for the farm when his time comes. How far into the future that will be is yet to be determined, but the young farmer is still working away to make sure his farm continues to produce high-quality lambs.

Although he has achieved many accolades in his years of showing, he’s not willing to settle until he reaches the very top and that is his main concern for the future.

“I want to breed a premier lamb. That is my main objective going forward,” he declared.

If you want to share your story, email info@thatsfarming.com