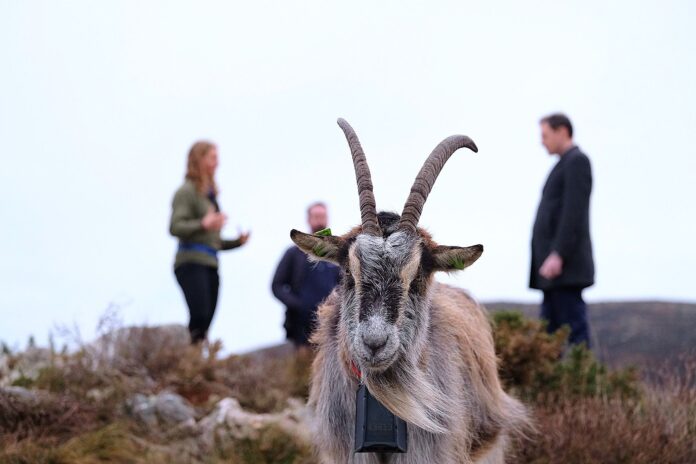 The Old Irish Goat is now a native rare breed, Minister for Agriculture, Food and the Marine, Charlie McConalogue has confirmed.

The DAFM also now recognised the Old Irish Goat Society as a breed society and has approved it to maintain a breeding programme for the breed in Ireland.

According to the DAFM, there are “many” factors such as historical, cultural and genetic diversity that make the breed a “unique” breed with a “rich” history to Ireland.

The breed arrived in Ireland during the Neolithic age and adapted naturally to the Irish landscape over time.

The portrait of the Connemara Girl by Augustus Burke 1880 captures the phenotype of the Old Irish Goat:

The Old Irish Goat can control the accumulation of gorse due to their skilled grazing behaviour and efficient digestive systems. They can adapt to feeding in harsher environments.

The Old Irish Goat is part of a conservation grazing project in Howth Head which commenced in 2021.

Goats are reducing gorse cover in the area that has been “plagued” with wildfires.

By returning to the old ways of grazing land, this method of grazing is a more sustainable and environmentally friendly way of managing the landscape in heathland habitats, the DAFM says.

The society has a core of “enthusiastic” breeders who wish to preserve the breed into the future.

The society received funding through the Genetic Resources Grant Aid Scheme that the DAFM administered over a number of years for it to obtain this recognition and operate its breeding programme.

Following extensive work by Weatherbys on DNA profiling using the latest genotyping technology, the breed has been shown to be unique, based on the genetic distance from other breeds.

According to the DAFM, based on FAO criteria, the breed is ‘at risk’. Furthermore, it is in the Critical Maintained category due to the number of breeding females.

Figures indicate there are currently 37 breeding females and 25 breeding males.

The DAFM says this indicates numerically the breed is scarce and considers it to be of critical status as per FAO guidelines.

A DAFM spokesperson said: “The breed’s survival is, therefore, of concern to DAFM.

“Recognition of the breed as a native breed with a conservation status at risk means that it could be considered for future participation in appropriate CAP funded schemes,” the spokesperson concluded.