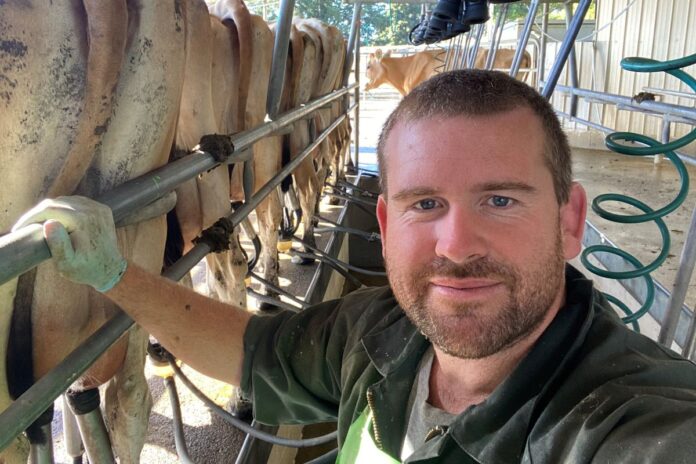 “I live with my wife, Holly, and children, Willie (3) and Frankie (1.5). Our farm is in Paterangi, just outside of Te Awamutu in the North Island, New Zealand.

My father employs me to manage the farm, but he also works on it; we do not employ anyone else.

It is called Coshquin, which was the name of the farm owned by my great, great grandfather who immigrated from Ireland back in 1853 (they were Ulster-Scots).

My great grandfather bought it in 1912. He owned another farm down the road, but he sold it when they built the railway.

Instead, he brought this one closer to the train station so his kids could go to school in Hamilton.

It was a sheep and beef farm, and he converted some of it to dairy in the 20s or 30s.

My grandfather bought the dairy part from his father when he returned from the 2nd World War; it was 46 hectares. The sheep and beef part went to one of his brothers.

I am the fourth generation to farm here, and our family has been in the area for almost 150 years.

Around 30 years ago, my father purchased the farm from his father and, at about the same time, brought 20ha off a neighbour as well.

He milked 210-220 cows by himself, up until four years ago when my cousin retired and sold half of his farm (30ha) to him.

This meant I could come home and farm alongside dad.

We have two herds.

Currently, we are milking 310 straight Jersey cows and are trying to peak milk at 320. They all calf in spring and are milked OAD from the start of lactation.

Calving starts on July 18th, which is a little late for our area, but we find it works well because we can get short of feed in September-October, so calving a little late gives us more cover.

We graze our cows outside for all of the year and dry them off altogether at the end of May. That means June through until the start of calving; we do not milk any cows.

Also, we do not feed any supplement out either through that time. Cows are on a 100-day grass rotation. I try and carry all the cows through until dry-off and then send culls away where, as dad used to cull when it got dry.

I prefer to hold onto them until the end because empties milk really well, and it is beneficial to keep a bit more supplement and carry them through. 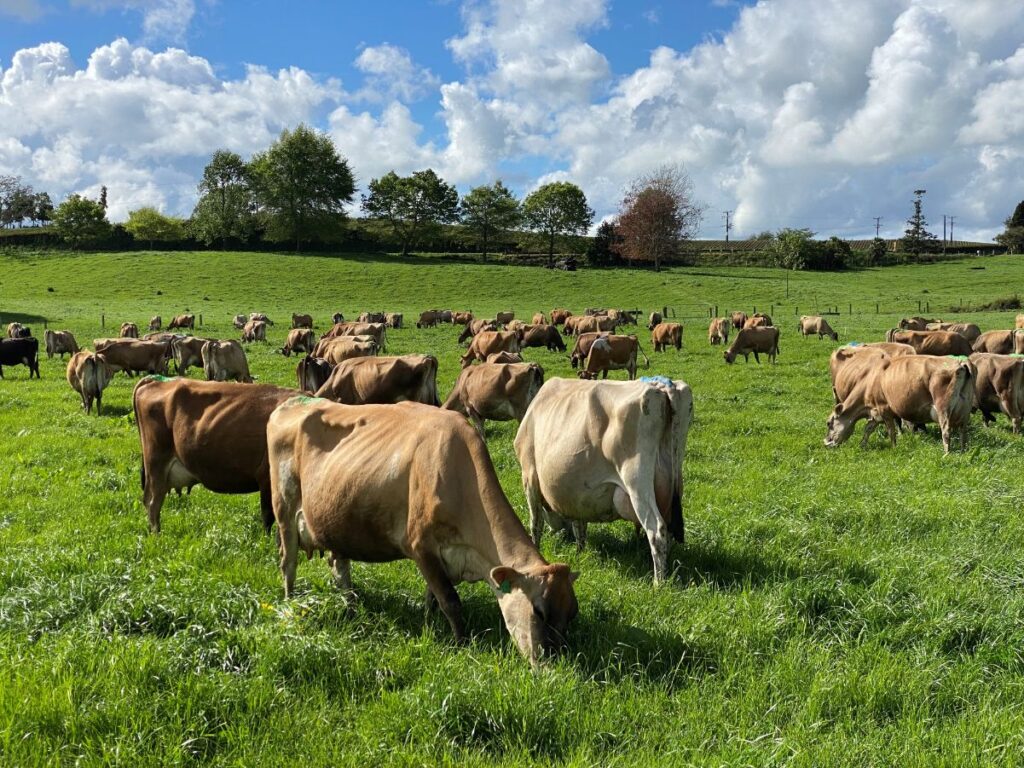 We farm Jerseys for a couple of reasons. Firstly, all previous generations farmed them (not the same herd).

Also, they are a lighter framed cow, which is good in winter, reducing pugging. Furthermore, they are great converters of grass to milk solids (because we get paid by the MS, not litres) and adapt well to OAD.

My idea of the perfect cow is one with a great udder that has good teat placement, longevity and high fertility.

We start AI on October 18th and use AI for 4-5 weeks and then put a Jersey bull with the herd to mop up.

Moreover, we prefer to stick with Jersey to Jersey as it is easier on cows, having a smaller calf.

We have tried beef bulls in the past and have had big problems. Dad does all our own AI, which is handy. I utilise a mix of frozen and fresh straws and mainly use NZ genetics.

Also, I tried using sexed semen for the first time this year. I only brought 30 straws over, which get delivered fresh over the first 9 days of AI.

The main reason for that was getting more heifer calves from my better cows and faster genetic gain.

My main goal is to push the 3-week rate up. I keep 25% replacements but only want to keep them from the first 3 weeks.

Furthermore, I believe this is detrimental in breeding a more fertile cow, which is also another main goal. I want to get our empty rate down to around the 5% mark.

Preg scanning is completed at the start of February. Two years ago, the empty rate was 11.5%, so it is slowly going down.

I do not keep carryover cows; if a cow does not go in-calf in that ten weeks of mating, then I remove her from the herd. At the end of the day, it is all to do with breeding higher fertility cows. 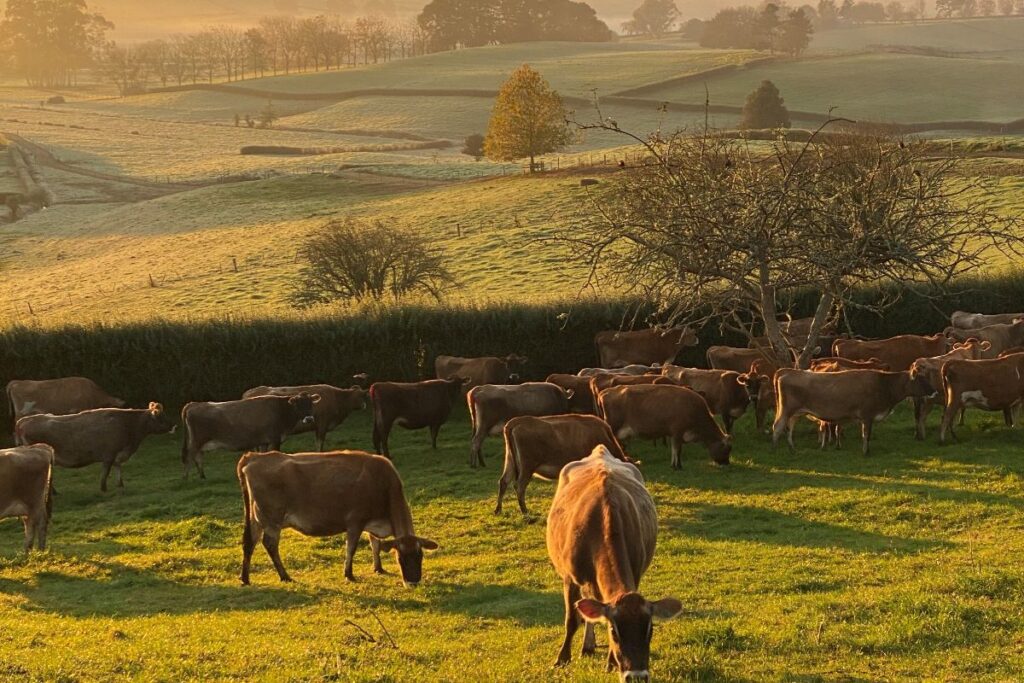 I try and sell as many bull calves to calf rearers as possible who rear them for service bulls.

However, that market fluctuates a lot from season to season, so my goal is to get more heifer calves that I can sell.

That is when the rising in-calf 2-year-old heifers come back onto the farm as well. They are contract reared at someone else’s enterprise about 30 minutes away.

It makes better financial sense to send them away to land that is not so suited to dairying rather than rearing them on-farm.

Our milking shed is a 16-a-side herringbone swing over (the 1970s). It is too small for our farm, but milking OAD is not too bad.

However, we are looking at extending it to a 24+ over the next couple of years to make life a bit easier.

We need a bigger shed. We supply Fonterra, and this season, to date, we are up 3% compared to the last. However, at the time of this interview, this was dropping rapidly due to going into a drought.

The herd delivered 320kgs of milk solids/cow last season, which is a record for us. Furthermore, we are looking to improve that, but that all depends on when it rains next.

I always budget on a drought as we tend always to get one at some point. It is just a case of when and for how long. So to try and mitigate for it, I make about 80-90 silage bales around November.

Also, I grow 6ha of maize (average 23-25tDM/ha). I harvest in February/March and mainly store it for the next season.

Also, I direct drill 4ha of chicory, which is a herb that is rotationally grazed from December to April.

Lastly, I import 80t of palm kernel that I feed with maize.

I get asked quite a lot what it is like working with my father and how open he is to embrace new ideas of mine.

To be fair, he is always keen to let me give anything a go within reason. 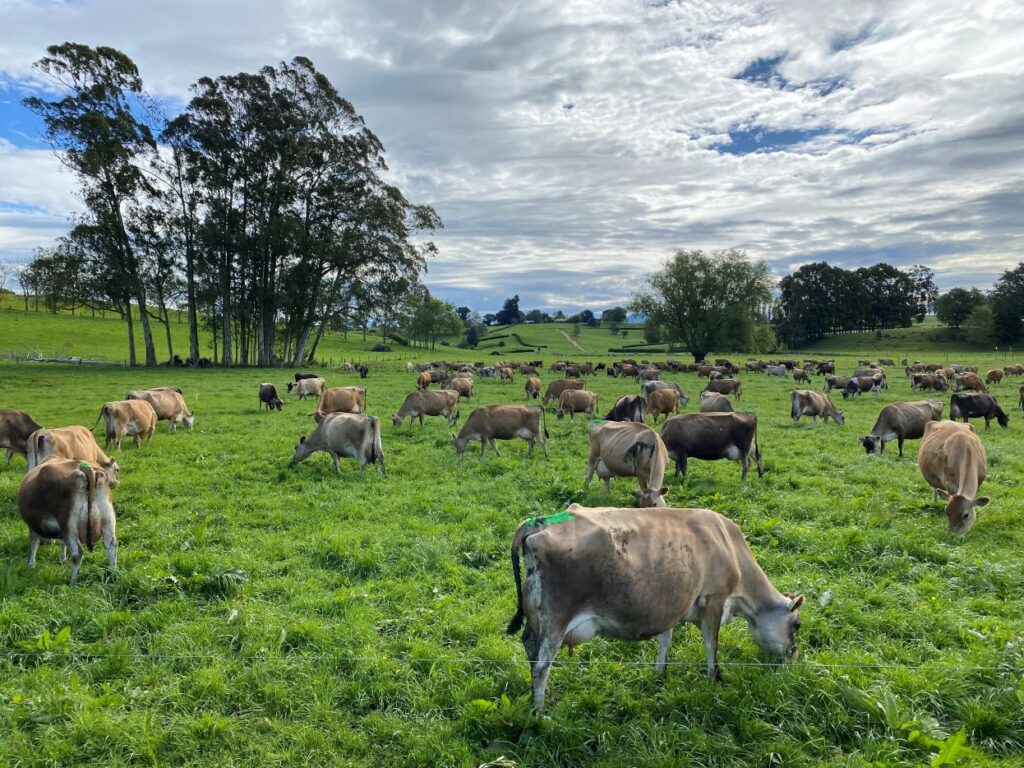 Dad decided to go to OAD milking around 7-8 years ago as summers started to get dry. Plus, milking 220 cows on your own is also a lot of work.

Since making the switch, he has never looked back. Plus, cows recover well after calving, lameness cases have massively reduced, there is better repo (due to condition), and we have a much better lifestyle!

The best he did when operating a TAD system was 327kgMS/cow.

We run a pretty low input system, which that suits our lifestyle but it is also resilient when the payout is not so good.

The biggest challenge we face is our dry summers; we grow more grass in the winter than we do in our summers! That is crazy, right?

Our farm is centrally located in the North Island; about 1.5 hours from each coast, Lake Taupo and also Auckland Airport.

It is also a good dairy country, which means that land is pretty expensive. Currently, land around here is roughly worth $60,000 NZD + / ha.

I would love to expand the farm if the opportunity ever comes to pass. Ideally, I would like to milk 450 cows, but we have a well set-up farm with only two labour units.

I started watching dairy farmers from all around the world on YouTube and found it so interesting. There are quite a few that are really big too.

However, there was not really anyone in NZ doing it big time, so just over a year ago, I brought a GoPro and thought I would give it a shot.

After all, I had nothing to lose, plus I thought people would want to see our farming methods down here as it is so much different from the rest of the world.

So, just over one year and 12k subscribers later, I am still doing it, About 35% of my viewers come from the UK/Ireland, and the feedback I get is really cool and positive.

There is also a lot of interest in the OAD milking system.

I get a buzz when people leave comments saying where they are watching from. It is amazing that the channel is reaching people all over the world! 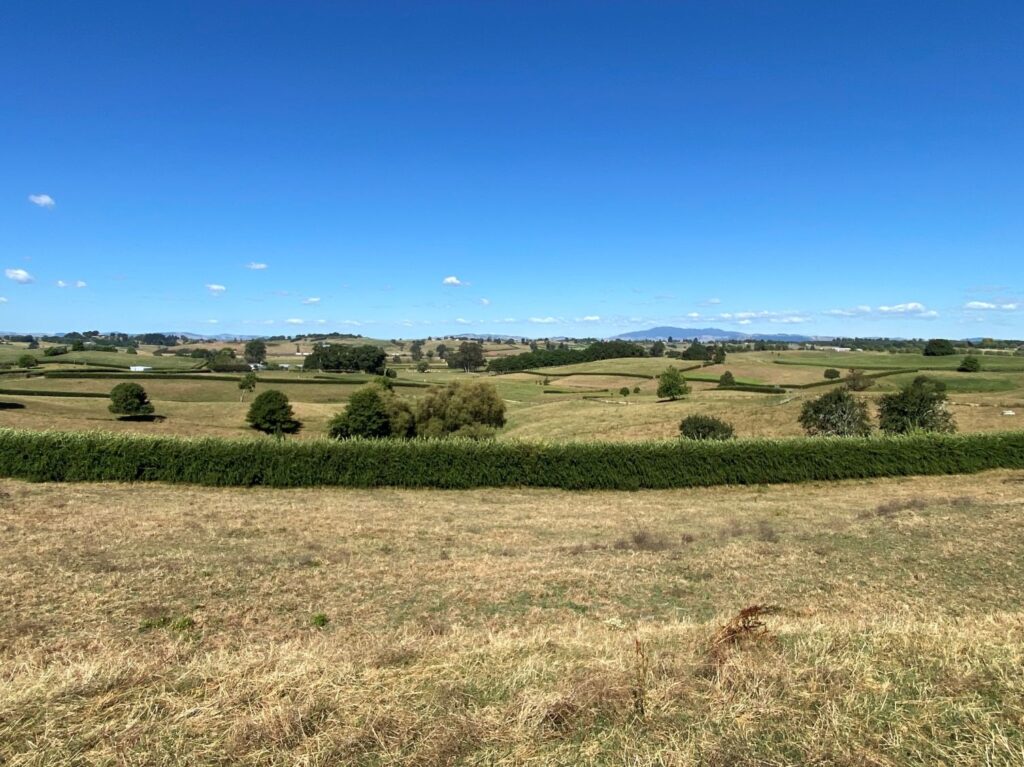 Our short terms goals and plans are to keep doing what we are doing and hopefully be in a position to extend our cowshed within the next couple of seasons.

Our target production is 350kgMS/cow. I am a long way from that, but that is my aim and I think is possible with good breeding and minor tweaks here and there.

Also, it depends on what summer looks like and has a significant impact on production.

Currently, the outlook for dairy in NZ is very, very positive. With a record-high dairy payout and good global dairy auctions, the future is very bright and exciting.

It has been such an amazing journey being able to come home and work alongside my father and learn from him as much as possible and introduce new things along the way.

I hope I can leave the farm in the best shape possible for future generations,” the OAD farmer said.

- Advertisement -
Previous article
‘Concern among hauliers that fuel will be hitting €2.50/L by the end of the week’
Next article
North-West Macra king and queen crowned