That's FarmingThat\'s Farming Irelands Largest Farming News, Properties and Classifieds Network
HomeBeefReport: 12 of some of the highest-priced suckler cattle in 2022 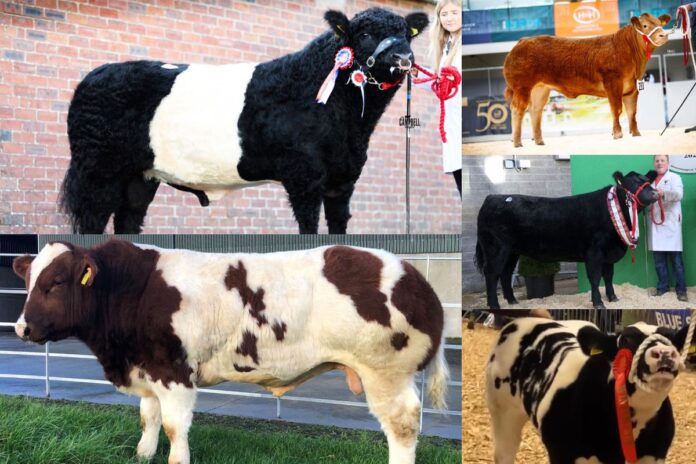 Report: 12 of some of the highest-priced suckler cattle in 2022

In no particular order, we take a look at some of the highest-priced suckler cattle featured on That’s Farming in 2022, writes editor, Catherina Cunnane.

Graiggoch Rambo sold for a new Limousin bull record price when he went under the hammer for 180,000gns at the British Limousin Cattle Society’s sale in Carlisle in May.

According to the sales catalogue, Rambo is the first bull the Graiggoch herd in Wales has ever offered for sale.

Gerwyn Jones, breeder, said the bull has “a pedigree packed with power and quality, with sires, Broadmeadows Cannon, Ronick Gains and Wilodge Vantastic and two of the top brood cows in the breed, Ravenelle and Broadmeadows Ainsi”.

Read more on this bull.

Earlier this month, a January-2022-born Belgian Blue bull sold for €52,500 in a timed virtual auction.

Read more on this mart report.

Pedigree Limousin heifer, Sassy Girl, made headlines after selling for a record-breaking £36,000 (just over €41,000) to a phone bidder.

The Trueman Idol daughter out of Rocky-sired, Ashmara Classygirl was tapped out as reserve champion at the Welsh Winter Fair 2022.

She previously scooped the supreme champion silverware at Harrison and Hetherington’s 13th Borderway Agri Expo, as reported by That’s Farming, and secured the first prize winner rosette at the Limousin Society’s 50th-anniversary show.

The Limousin heifer is from the joint (Katrina and James from Wigton) and Shortt (Allen and Little Emma Shortt, Co. Tyrone) partnership and was bred by Chris Johnson, Fivemiletown, Co. Tyron

The O’ Connell brothers’, Carrickmore Schumacher ET, has found a new home at Trevor Shields’ Glenmarshal farm in Co. Down, after changing hands for €30,000 in Carrick-on-Shannon in October.

John and Karl, from Co. Meath, sold the bull in the yard after he scooped the intermediate male, overall male and overall Limousin reserve champion silverware at the Irish Limousin Cattle Society’s 50th-anniversary show and sale.

The September-2021-born bull is a son of Sympa, and his dam is Baileys Ice Princess, the overall champion at Royal Ulster Show 2015, National Limousin Champion 2015 and 2016 and World Limousin Congress Champion in 2016.

Ice Princess is also the dam of the €38,000 Carrickmore Maximum (S3706), Schumacher’s half-brother by Ampertaine Foreman, who sold at the Irish Limousin Cattle Society’s premier sale in Roscrea in October 2018.

Lot 525 from the Charlestown, Co Mayo native was tapped out as the junior blue champion during Sunday’s show.

She was born in May 2022, crossed the scales at 331kgs and stood first in her class 37: Belgian Blue-cross female calf 350 kgs or under, sponsored by Eurogene AI Services.

Have a look at more highlight lots from this year’s sale, which saw vendors, including Cian McGloin and Pearse McNamee, fetch over €10,000 for lots.

Carrowboy Untouchable ET unarguably lived up to her name when she went under the hammer in Carrick-on-Shannon on Saturday, December 10th, 2022.

The first to be offered for sale from the Carrowbow Angus herd, property of Alan Gibbons, Caggle, Strokestown, Co. Roscommon, she secured the highest price tag of €10,000 at the Irish Angus Cattle Society’s 2022 elite show and sale.

By Rawburn Boss Hogg N630 and out of Kilteevan Damsel, a Bohey Jasper daughter, the January-2021-born female has been successfully shown for the past two years.

She has picked up several titles, including the Angus female calf champion silverware at the 2021 calf show.

Another heifer up there in the price ranks was the €8,500 sale-topping Chocolat daughter at Tateetra and Rathmore Farms’ fourth annual sale, which it held at Carnaross Mart on Friday, September 23rd, 2022.

The four-star female was born in November of last year and is out of a Kilcombe Matilda ET dam. Read more on this mart report.

A 17-month-old bull from the herd of Alison Taylor set a new breed Belted Galloway breed record of 14,000gns when he went under the hammer at the society’s annual sale at Castle Douglas on Friday, October 28th, 2022.

Grassknop Idris, by Cairnsmore Fergus and a home-bred cow, Grassknop Mai, scooped the pre-sale show male champion silverware before he went out to sell for the record-breaking price tag.

He was successfully exhibited at agricultural shows and picked up the reserve breed champion rosette at the Great Yorkshire Show earlier this year.

Read more on this article.

Superb is by the noted Derrygullinane Kingbull and out of Jalex Missy,  a home-bred cow bred by Bassingfield Hobama and Trueman Isabella, a full sister to the well-known Trueman Idol.

All records were broken at Ballymena Livestock Mart’s first suckled calf sale of the season on September 24th, 2022.

That is according to a spokesperson, who reported that Stephen and Sandra Gowdy’s 8-month-old Belgian-Blue-cross weanling heifer with “tremendous show potential” crossed the scales at 310kgs and changed hands for £9,000, which is just over €10,100. Read more on this report.

Topping the first on-farm Jalex Select sale of in-calf heifers on James Alexander’s farm in Randalstown, Northern Ireland at £10,000, was a “truly outstanding” British Blue-cross heifer by Sheehill Fearless, an Empire D’Ochain son out of a Wilodge Topgun cow.

She was carrying a heifer calf by Brookland Poet, as outlined in this report.

At 30,000gns, Denizes Lancelot sold for what the British Simmental Cattle Society understands to be the second-highest price for the breed at auction in the UK.

Denizes Lancelot is a son of the home-bred sire, Denizes Impeccable 17.

He is out of Denizes Hannadante 9th, who at 13-years-old is one of the oldest cows in the herd. She has previously bred bulls to 15,000gns and is back in-calf.

Read more on this mart report.

The above cattle are just a sample of those featured on That’s Farming this year. You can view our full mart report section.

- Advertisement -
Previous article
Quiz: How much did these cattle sell for at Carrick Winter Fair?
Next article
‘I trained and worked with the “work hard, play hard” ethic’ – vet on career break