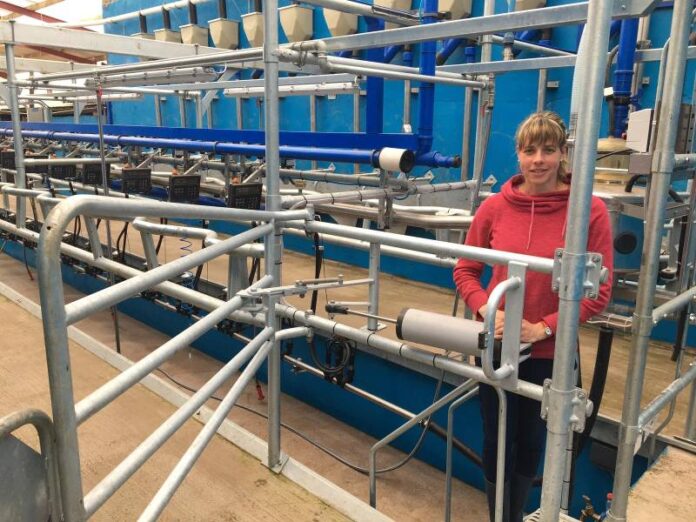 Jillian, a member of a CAFRE Business Development Group (BDG), farms with her father, Tom Phair, at Garvary.

The farm has dairy and suckler beef enterprises, extending to 250 ha, running from lowland to heather moorland.

Currently, there are 50 dairy cows plus heifer followers and 30 suckler cows, and they take all progeny to beef or forward stores.

Up until late May 2022, they milked the dairy herd through an old 6-point parlour they installed in the late 1970s.

This parlour, according to Jillian, had become outdated and was not practical for the father-and-daughter duo’s expanding herd.

Over recent years, the dairy herd has expanded from circa 30 cows to the current 50-cow herd.

Jillian aims to increase the herd further to around 65 cows. With this in mind, she decided to build and install a new 12-point DeLaval parlour with Auto-Identification and a Feed-to-Yield system.

The new parlour software will also link to the existing Sensehub heat detection system, which aims to tighten calving patterns.

As Jillian explains, “In the old parlour, it was hard to assess levels of meal feeding needed. This tended to result in some over or underfeeding of concentrates.”

This parlour has been in operation for a month, and Jillian is finding cow management much easier in terms of feeding as they can now feed each cow individually based on milk yield.

She also reports that cows are “more settled” and can be milked much quicker.

“As part of her local BDG, Jillian has completed CAFRE Benchmarking annually for several years to keep an eye on dairy herd performance and feed efficiency.”

Milk output and the level of milk from forage have increased significantly over the past few years, with production having increased from just under 6,000 litres and milk from forage increasing from 2,294 litres to the current level.

Cows are normally grazed both during the day and at night, which has been “challenging” this year in May and early June due to wet conditions.

They have reseeded a “significant” area of the more lowland area of the farm in recent years.

This, along with improved grazing management and cutting silage earlier, has contributed “greatly” to the increase in milk yields from grazed and conserved grass.

“This year, the first cut silage was made later than intended due to the inclement weather and poor ground conditions. This may have an impact on the levels of concentrates needed this winter.”

“A second cut is planned in mid-July with the aim of making high-quality silage. Further reseeding is planned for later in the summer, with a traditional full reseed using ploughing being preferred.”

“This helps to alleviate any compaction issues which the heavy soils on the farm can be prone to,” she adds.

Breen adds that Jillian is now hoping that the benchmarking results will be “even better next year” due to the new parlour offering more accurate feeding leading to improved feed efficiency.

- Advertisement -
Previous article‘Life is not for sitting in traffic, wasting hours to get to and from work’
Next article‘The government’s answer is to take 49% of the cost of fuel in tax’