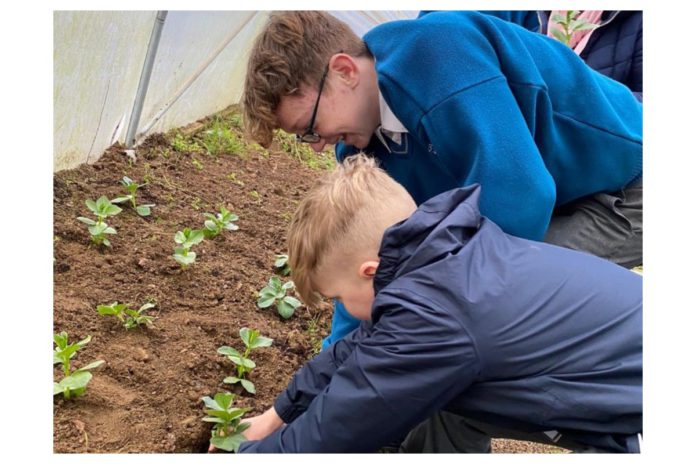 Dean O’Connor, from county Wexford, is shaping the farmers of the future by implementing new, interesting ideas into his school to teach the students about farming and where their food comes from.

Dean spent a lot of time on his uncle’s beef and suckler farm growing up and still does today.

Teaching was always his dream job, even at a young age, and this led him to study post-primary teaching in St. Patrick’s College, Thurles, which is part of Mary Immaculate College.

The Wexford man has been teaching in Adamstown for the last four years. “I went up to Adamstown for a day as a substitute teacher and I’m still here 4 years later.”

The young teacher decided to start an agri-club in the school, a club which allowed students to get a practical understanding of farming and sustainability.

“It all started off with my interest in poultry. I had an incubator at home and I wasn’t using it.”

“I decided in my learning support classroom that we’d hatch out a few eggs in the class. I saw how interested and engaged the students were and I could see the excitement of the whole school over these baby chicks and ducks.”

“The school had a polytunnel that wasn’t being used, so I said I better use these facilities that we have in the school, and that’s where it all started.”

In 2018, the agri-club was established in the school on the back of the interest from students. That club now has more than 60 members and they often attend farm walks and talks in conjunction with Agri Aware.

On the school ground, the agri-club have established a fully functional polytunnel and a chicken coop for their 30 laying hens. They have turkeys, ducks, geese and broiler hens in the school also. The chicks were generously donated by O’Leary Poultry in Cork.

“I felt the need to develop a new subject for the students because Adamstown is a rural community and we are in the heartland of agriculture in Wexford.”

This idea coincided with the reform of the junior cert cycle. Dean decided to develop the new subject, agriculture and self-sufficiency.

Mr. O’Connor compiled his ideas and brought it to the National Council for Curriculum and Assessment (NCCA). After completing the application process and submitting his final draft, the course was approved. His idea was praised by a member of the NCCA.

“He said this course will be in great demand because it focuses on practical life skills – it’s relevant to the kids and it’s interesting and engaging.”

The subject was made available to incoming first-year students in 2019 with 24 students choosing the subject. It has already attracted a lot of interest for next years incoming students and the school predict that they’ll have two classes next year.

Word of the new course has spread around the country and the teacher’s phone has been ringing non-stop.

“I’m after having about 40 or 50 schools ringing me. At the minute, I’m keeping it to my own school, but I will eventually roll it out to other schools.”

“It’s very sentimental to our school. It makes our school unique.”

In order to raise funds to further develop the agricultural facilities within the school, Dean has organised to raffle an Aberdeen Angus calf, with tickets, which can be purchased here, costing only €5.

“It’s received a great response locally. The local marts in Enniscorthy and New Ross have been selling tickets as well and the response there has been great.”

“We want to build a proper chicken coup for the school, with a concrete base, that’ll be in the school for years.”

The monies raised will also go towards repairing a polytunnel that was damaged in a recent storm.

For anyone looking to promote agriculture in their own school, Dean says “make it relevant, make it interesting and make it practical.”

“We’re responding to student’s needs. I felt that I wanted to instil my passion for agriculture in the students while meeting the needs of the school.”

“Overall, it’s been a really positive experience. I think we’ve met the needs of the school and that’s what is key.” he concluded.

- Advertisement -
Previous article
Marts across NI to close due to Covid-19
Next article
PHOTOS: Covid-19 – How one mart facilitated buyers and sellers