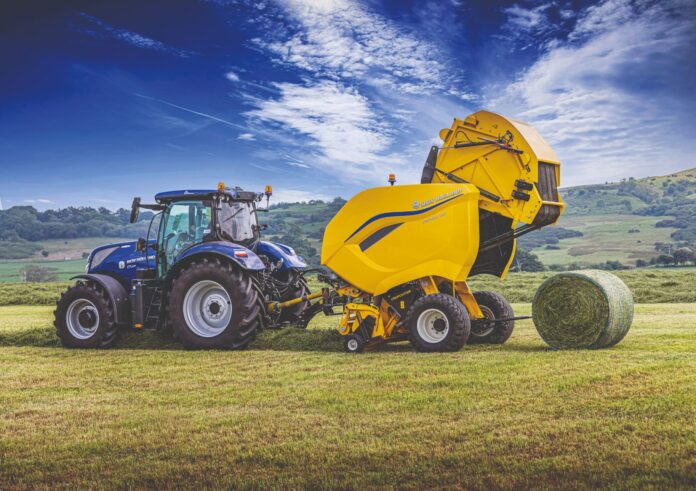 According to the company, its new Pro-Belt premium baler stands out for its:

The machinery giant will launch the new machine to the public in November 2022.

New Holland designed its Pro-Belt based on feedback collected through numerous customer test drives conducted across the world.

According to New Holland, participants “clearly” expressed the performance characteristics they considered fundamental:

New Holland claims that its new baler delivers on all counts with “outstanding” performance.

It has developed the new baler for reliability and durability. There is a split gearbox for high mechanical efficiency and robustness and a streamlined design with fewer, stronger components and moving parts.

The heavy-duty 520 mm-diameter rotor, in combination with the active drop floor, provides constant feedback to the operator. This enables operators to maximise productivity with high throughput and non-stop feeding.

“With a capacity up to 30 tons per hour and 140 kg/m3 in straw, the Pro-Belt will enable customers to bale their crop faster, finishing their field in less time with fewer bales.”

“We developed the Pro-Belt Series to meet the specific needs of contractors and farmers who clock up a high annual use of their balers.”

“Its dependability is a key success factor for them. It performs equally well when the harvesting windows are anticipated or postponed.

“It stands out for its exceptional productivity in all crop conditions, delivering high bale density that helps maintain the nutritional properties of the freshly harvested crop.”

“What is more, this outstanding versatility and performance come in a stylish, streamlined design.”

The machinery giant will preview the new Pro-Belt Series in demonstrations and local events in France, Italy and the UK during the first half of 2022.

This will pay the way for its official launch to the public in November at the SIMA show in Paris, France and Eima exhibition in Bologna, Italy.

The unveiling of this new baler from New Holland comes days after Kuhn took the wraps off its new VBP 3165.