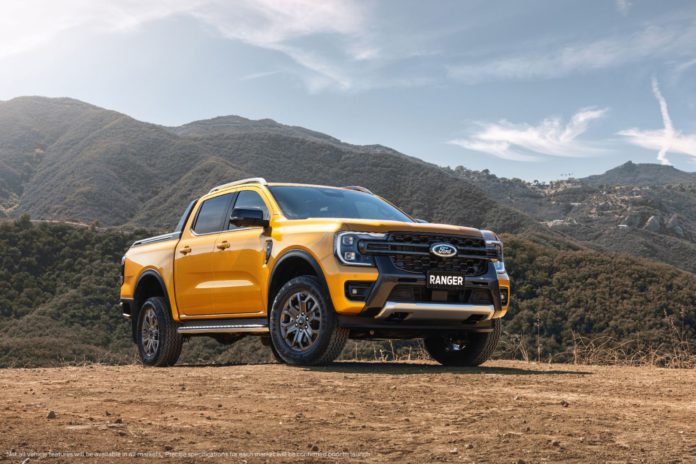 Video: New Ford Ranger ‘most capable and most versatile ever’

Ford has taken the wraps off its new 2022/2023 Ranger, which it claims, is its “smartest, most capable and most versatile ever”.

The company has redesigned the next-generation Ranger “from the ground up” to deliver “even more of the strength and style that customers value”.

“Ultimately, we want our customers’ experience with the pick-up to enable and enhance their lifestyles,” the company said.

Ford calls this ‘Living the Ranger Life’. This is something every designer and engineer involved in creating the next-generation Ranger share.

“Our team focused on one goal – to make this Ranger the toughest and most capable we’ve ever created,” said Graham Pearson, Ranger vehicle program director.

Developers put the vehicle through the “most exhaustive” global testing schedules the company claims to have ever developed. “They would not rest until we were satisfied that it was built Ford tough.”

The company claims that customer input was “key” to developing the next-generation Ranger’s “rugged” new look.

Visually, the next-generation Ranger is “bold and confident”, with a purposeful exterior that shares Ford’s global truck design DNA.

The design features a defined new grille and signature C‑clamp headlight treatment at the front. A subtle shoulder line down the sides incorporates bolder wheel arches that give Ranger a “sure-footed stance”.

For the first time, Ford Ranger offers matrix LED headlights. At the back, the taillights are designed in harmony with the signature graphics on the front.

Beneath the new bodywork is an upgraded chassis riding on a wheelbase 50 mm longer and a track 50 mm wider than the prior Ranger.

A hydroformed front‑end structure creates more space in the engine bay for the new V6 engine and helps future-proof the Ranger for other propulsion technologies.

It also opens the front of the pick-up to allow more airflow to the radiator. According to Ford, this keeps running temperatures low when towing or carrying heavy loads.

Furthermore, for more power and torque for towing heavy loads and extreme off-roading, the team added Ford’s proven 3.0-litre V6 turbodiesel and developed it for the Ranger.

The next-gen Ranger will also come with a choice of proven Single-Turbo and Bi-Turbo 2.0-litre in-line four-cylinder diesel.

To develop the ride and handling expected of a truck customers use for a wide range of activities – engineers focused on the fundamentals.

Engineers shifted the front wheels forward by 50 mm for a better approach angle and outboard for better off-road articulation. According to Ford, both will improve the off-roading experience.

Also, they moved the rear suspension dampers outboard of the frame rails to give drivers and passengers a better experience.

Customers will have a choice of two four-wheel-drive systems:

Off-road recovery is made easier with prominent dual recovery hooks in the front bumper.

Customers wanted a flexible, modern cockpit that caters to both work and family duties.

So, Ranger needs to serve as both a workspace and a haven, providing “smart and connected” features with more comfort and storage options than ever before.

Furthermore, there is a large 10.1-inch or 12-inch touchscreen in the centre stack. It complements the fully digital instrument panel and is loaded with its customer-ready feature-packed Ford’s latest SYNC™ 4 system.

Additionally, an embedded factory fitted FordPass Connect modem allows connectivity on the go when linked with the FordPass™ app.

FordPass enhances the ownership experience with features like Remote Start, 6 Vehicle Status, and remote lock and unlocks functions via a mobile device.

Many of the traditional driving mode controls have been moved from the dash and centre console to their own dedicated display on the SYNC™ screen.

The screen also is linked to a 360-degree camera, and customers can control Ranger’s new exterior zone lighting system via the touchscreen or the FordPass app,

Order books for next-generation Ranger will open in Europe in late 2022 for customer delivery in early 2023.

Customers in Europe can personalise their next-gen Ranger from launch with a range of over 150 fully factory-backed accessories.

Lastly, the next-generation Ranger will be built at Ford’s plants in Thailand and South Africa beginning in 2022.

- Advertisement -
Previous article
‘Super’ trade for strong, forward stores at Raphoe
Next article
‘You should be doing contracting for the love of it and not for the money’